The man accused of killing five people at a Maryland newspaper was investigated five years ago for a barrage of menacing tweets against the Capital Gazette, but a detective concluded he was no threat, and the paper didn't want to press charges.

4 editorial workers and a sales department employee were killed, and 2 others injured

The man accused of killing five people at a Maryland newspaper was investigated five years ago for a barrage of menacing tweets against the Capital Gazette, but a detective concluded he was no threat, and the paper didn't want to press charges for fear of inflaming the situation, according to a police report released Friday.

The newspaper was afraid of "putting a stick in a beehive."

The 2013 police report added to the picture emerging of 38-year-old Jarrod W. Ramos as the former information-technology employee with a longtime grudge against the Annapolis newspaper was charged with five counts of first-degree murder in one of the deadliest attacks on journalists in U.S. history.

Authorities said that Ramos barricaded the rear exit of the office to prevent anyone from escaping and methodically blasted his way through the newsroom Thursday afternoon with a 12-gauge pump-action shotgun, cutting down one victim trying to slip out the back.

"The fellow was there to kill as many people as he could," said Anne Arundel County police Chief Timothy Altomare. 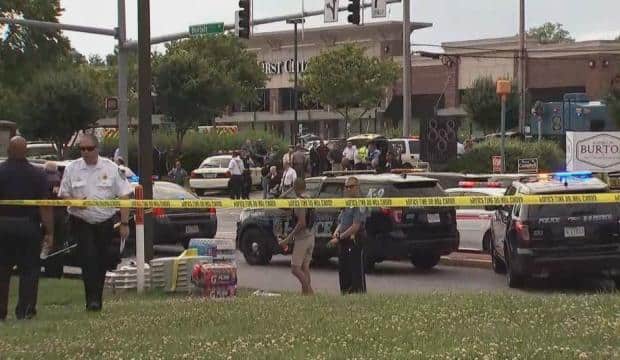 3 years ago
0:43
A gunman opens fire at the offices of the Capital Gazette local newspaper in Annapolis, Md., killing five people and wounding others 0:43

Ramos was "unco-operative" with his interrogators, police said, and in court papers, authorities described him as "recalcitrant."

Appearing in court via video before he was denied bail, he appeared to watch attentively but never spoke. His public defenders had no immediate comment outside court.

The first-degree murder charges carry a maximum penalty of life without parole. Maryland has no death penalty.

There is nothing more terrifying than hearing multiple people get shot while you're under your desk and then hear the gunman reload.- Phil Davis, courts and crime reporter

Prosecutor Wes Adams says Ramos carefully planned the attack, barricading the back door and using "a tactical approach in hunting down and shooting the innocent people."

Adams said the gunman, who was captured hiding under a desk and did not exchange fire with police, also had an escape plan, but the prosecutor would not elaborate.

Few details were released at the court hearing on Ramos, other than that he is single, has no children and has lived for the past 17 years in an apartment in Laurel, Md. In the 2011 article that Ramos sued over, his lawyer said he had a degree in computer engineering and worked for the U.S. Bureau of Labour Statistics.

Ramos had a well-documented history of harassing the paper's journalists, a feud that apparently began over a column about Ramos pleading guilty to harassing a woman. He filed a defamation suit against the paper in 2012 that was thrown out as groundless, and he often railed against its staff members in profanity-laced tweets.

The former editor of the Capital Gazette said he became increasingly alarmed five years ago when the suspect in the slayings began targeting him and others at the newspaper with angry social media messages.

Tom Marquardt said he called police about Ramos in 2013, but they said the messages were not clear-cut threats. Marquardt said he talked with the newspaper's lawyers about seeking a restraining order against Ramos, but decided against it because he and others thought it could provoke Ramos to do something worse.

"We decided to take the course of laying low," he said.

"This led us to believe that he had moved on, but for whatever reason, he decided to resurrect his issue with the Capital yesterday. We don't know why."

Police said surveillance video recorded the attack, which began with a shotgun blast that shattered the glass entrance to the open newsroom.

Journalists crawled under desks and sought other hiding places, describing agonizing minutes of terror as they heard his footsteps and the repeated blasts of the weapon.

Officers responded in about 60 seconds and arrested him without firing a shot, police said. They recovered a gun and said he also carried smoke grenades. Some 300 local, state and federal officers converged on the scene, Altomare said.

The police chief referred to Ramos as "the bad guy," refusing to utter his name because "he doesn't deserve for us to talk about him for one more second."

Police identified the suspect quickly with help of facial recognition technology from the Maryland Image Repository System, Altomare said. He also confirmed that the weapon was a pump-action shotgun, legally purchased about a year ago.

The attack on the Capital Gazette came amid months of verbal and online attacks on the "fake news media" from politicians including President Donald Trump, although the alleged shooter's apparent grudge with the newspaper predates Trump's political career.

"Journalists, like all Americans, should be free from the fear of being violently attacked while doing their jobs," he said.

White House press secretary Sarah Sanders also weighed in, writing in a tweet: "Strongly condemn the evil act of senseless violence in Annapolis, MD. A violent attack on innocent journalists doing their job is an attack on every American."

'This guy could really hurt us'

Ramos so routinely sent profanity-laced tweets about the paper and its writers that retired publisher Tom Marquardt said he called police in 2013, telling his wife at the time, "This guy could really hurt us."

The chief said police were told at the time that the newspaper didn't want to further inflame him by pressing charges.

In 2015, Ramos tweeted that he would like to see the paper stop publishing, but "it would be nicer" to see two of its journalists "cease breathing."

Investigators were reviewing his social media postings and searching his apartment in Laurel, Md., for clues to the violence.

"We had the instances in 2013, and then it went dark, and my understanding is that shortly before the incident, there were some posts," Altomare said.

Those killed included Rob Hiaasen, 59, assistant managing editor and younger brother of novelist Carl Hiaasen, who said he was "devastated and heartsick" at losing his brother, "one of the most gentle and funny people I've ever known."

The other staff members killed in the attack were:

The newspaper said two other employees had non-life-threatening injuries and were released from a hospital.

"There is nothing more terrifying than hearing multiple people get shot while you're under your desk and then hear the gunman reload," tweeted Phil Davis, the paper's courts and crime reporter.

In a later interview appearing on the paper's online site, Davis likened the newspaper office to a "war zone."

"I'm a police reporter. I write about this stuff — not necessarily to this extent, but shootings and death — all the time," he said. "But as much as I'm going to try to articulate how traumatizing it is to be hiding under your desk, you don't know until you're there and you feel helpless." 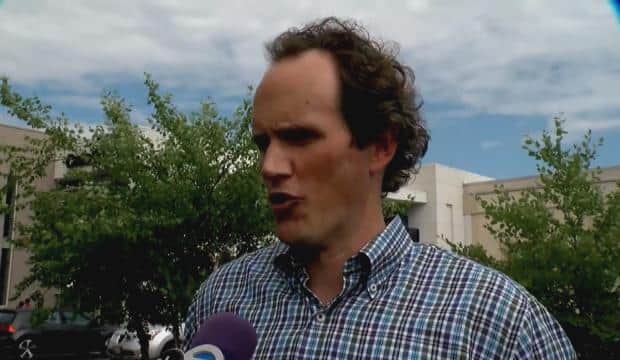 Two people talk about what they witnessed

3 years ago
0:57
The two witnesses recount what they saw during the shooting at the Capital Gazette 0:57

"I was curled up, trying not to breathe, trying not to make a sound, and he shot people all around me," Capital Gazette photographer Paul Gillespie, who dove beneath a desk, told the Baltimore Sun, owner of the Annapolis paper.

Gillespie said he heard a colleague scream, "No!" It was answered by a gunshot blast. He heard another co-worker's voice, then another shot.

Reporter Selene San Felice told CNN she was at her desk but ran after hearing shots, only to find a back door locked. She then watched as a colleague was shot, and said she didn't glimpse the gunman.

"I was breathing really loud and was trying not to, but I couldn't be quiet," she said. "I'm going to need more than 'thoughts and prayers."'

The reporter recalled a June 2016 mass shooting attack on Orlando's gay nightclub Pulse and how terrified people crouching inside had texted loved ones as dozens were killed. San Felice said, "And there I was sitting under a desk, texting my parents and telling them I loved them."

Despite the deadly attack, staff managed to put out a newspaper on Friday.

Photographs that were widely shared on social media showed newspaper staffers working on laptops in a parking garage to produce the next day's edition, while they waited to learn the fate of colleagues after the shooting.

Prior to departing Wisconsin, I was briefed on the shooting at Capital Gazette in Annapolis, Maryland. My thoughts and prayers are with the victims and their families. Thank you to all of the First Responders who are currently on the scene.

The morning's edition featured in-depth coverage of the shooting and obituaries of the five people killed. Each victim's photo appeared below the masthead.

And below the main shooting story were the staples of a community newspaper: a glance at the day's weather and a teaser to a national story inside: "Trump, Putin: The two leaders will meet in Finland in July."

The newspaper's editors left the editorial page blank with a note saying that they were speechless.

"These are the guys that come to city council meetings, have to listen to boring politicians and sit there. They don't make a lot of money. It's just immoral that their lives should be in danger."

The City of Annapolis announced a vigil for the victims Friday night at a public square near the Capitol, followed by a march to a dock for a service by the water.

The newspaper is part of Capital Gazette Communications, which also publishes the Maryland Gazette and CapitalGazette.com. It is owned by the Baltimore Sun.

The Associated Press Media Editors promised to help Capital Gazette journalists as they recover. An APME statement called on newspapers nationwide to help the paper continue its community coverage and fight for freedom of the press.