The Queen at 90: Why Elizabeth has so many birthdays

While most people get one day a year to celebrate their birthday, Queen Elizabeth gets at least two, more if you count the public holidays around the world. History and a desire to avoid bad weather both play into the multiple-birthday phenomenon for Elizabeth, who became Britain's longest-reigning monarch last September.

Monarch was born on April 21, 1926, but U.K. marks occasion officially in June 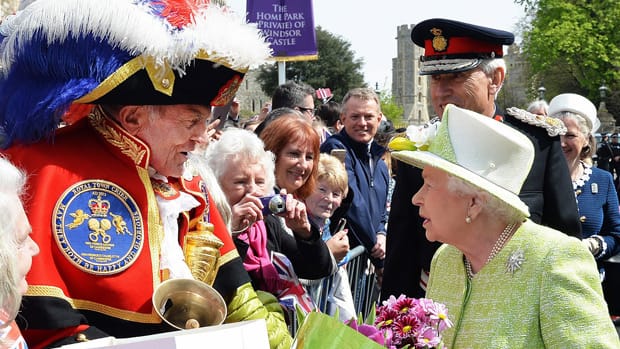 While most people get one day a year to celebrate their birthday, Queen Elizabeth gets at least two.

There's today — the day she really does turn 90. But official celebrations will be spread across a weekend in June and include the pomp and circumstance of the Trooping the Colour parade held annually in London to mark the occasion.

History and a desire to avoid bad weather both play into the multiple-birthday phenomenon for Elizabeth, who became Britain's longest-reigning monarch last September.

"There's a long tradition of the monarch's actual birthday being a more private occasion while the monarch's official birthday is an opportunity for the public to celebrate," says Carolyn Harris, a Toronto-based royal historian and author.

"Because this is a milestone birthday — her 90th year — as with the year of her 80th birthday, she will be appearing in public for a walkabout near Windsor Castle and lighting beacons as well."

The Queen's eldest son and heir, Prince Charles, also will host a private family dinner tonight in her honour.

In the United Kingdom, the Queen's official birthday is celebrated in June, a tradition that dates to the time of King Edward VII, who reigned from 1901 to 1910.

The exact timing of that official celebration was determined in large part by something remarkably prosaic: the weather.

Edward VII "succeeded Queen Victoria, whose birthday was May 24th but Edward VII had a more unseasonable November birthday, which was less conducive to public celebrations, so he decreed the monarch's official birthday would be in June," says Harris.

This year's Trooping the Colour parade takes place on June 11.

"That attracts a great deal of public attention as the Royal Family appears on the balcony" of Buckingham Palace, says Harris.

"This is one of the few public occasions where we see the Queen surrounded by many members of her extended family."

This year's 90th birthday celebrations also include a Service of Thanksgiving at St. Paul's Cathedral the day before — June 10. That also happens to be the 95th birthday of Queen Elizabeth's husband, Prince Philip. But he's made it clear he doesn't want any public celebration.

"He is just as remarkable," says author Sally Bedell Smith, who saw the Queen and Prince Philip when they visited Malta last fall.

Official celebrations for the Queen's birthday culminate with a giant picnic on the Mall in front of Buckingham Palace on June 12.

More than 10,000 people, including invited guests representing more than 600 charities for whom the Queen is patron and members of the public who won a spot through a ballot system, will tuck into £150 ($273 Cdn) picnic baskets prepared by Marks and Spencer, the Daily Telegraph reported.

"There is, I think, an appetite among the people for something biggish so that's why they're doing this … on the Mall," says Smith, whose biography Elizabeth the Queen was published in 2012.

"It has a purpose. It's not just everybody sitting down for lunch. It's intended to celebrate the Queen's charities and the many, many patronages she has."

The mayor of London will host a big lunch down the road in Trafalgar Square, and the palace is hoping grassroots lunches and street parties will spring up across the U.K.

The British government also is into the birthday spirit, announcing that bars and pubs can stay open later on June 10 and 11.

Other celebrations for the Queen include a four-night horseshow in May. Canada will have hooves on the ground for that equine spectacle, with the RCMP Musical Ride taking part in the event that will feature 900 horses.

The Queen "has had a lifelong interest in horses and racing so having a horse show of this kind very much reflects the Queen's interest," says Harris.

Beyond the United Kingdom, the Queen's birthday has been marked on various days.

In Canada, her official birthday is celebrated on the Victoria Day weekend in May, a time that has been popular for royal visits.

"In other parts of the Commonwealth, the celebration of the Queen's birthday varies and there's some interesting traditions that have emerged there," says Harris.

In Australia, for example, the monarch's birthday has been a holiday since 1788, but it's not the same date across the country. For much of the country, it's the second Monday of June.

Some countries have celebrated her birthday — or at least had a holiday for it — long after she's no longer their monarch.

In Fiji, Harris says, "the Queen's birthday celebration actually outlasted the Queen being Fiji's sovereign by a couple of decades."

The government bowed to public opinion after a coup d'état in 1987 and kept the Queen's birthday as a public holiday, Harris says, but that was finally abolished in 2012 when there was a decision to cut down on the number of such days.

With files from Erin Boudreau