Around 800 anti-North Korea protesters scuffled with riot police outside the Winter Olympics stadium in South Korea, hours before two of the North's most senior officials attended the opening ceremony. 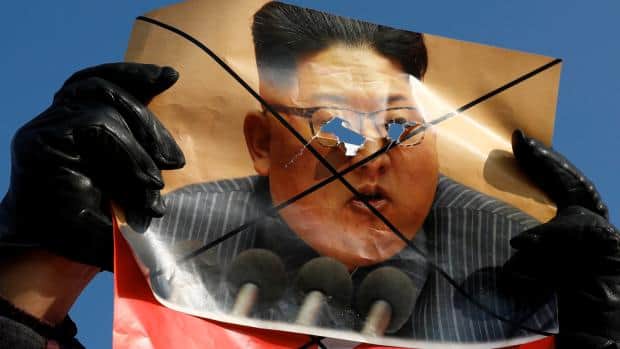 3 years ago
1:10
Demonstrators angry at North's close participation with South in Olympics 1:10

Hundreds of anti-North Korea protesters scuffled with riot police outside the Winter Olympics stadium in Pyeongchang, South Korea, hours before two of the North's most senior officials attended the Games' opening ceremony.

Protesters burned North Korean flags and pictures of leader Kim Jong-un as around 800 people gathered for a march toward the stadium where the Olympic torch was later lit, in what Seoul hopes will become a symbol of peace.

North and South Korea are still technically at war after their 1950-53 conflict ended in a truce. The North also faces ever-tightening international sanctions after it conducted a fresh nuclear test last year and a series of missile tests.

Protesters scuffled briefly with police and criticized South Korean President Moon Jae-in, who is using the Olympics to re-engage with the North and pave the way for talks over the reclusive state's nuclear and missile program.

They carried banners reading "Moon Regime is leading Korea to destruction" and one that made an appeal to U.S. President Donald Trump: "Mr President. North Korea bombing, please."

The North Korean leader's younger sister, Kim Yo-jong, was in the audience on Friday night, the first member of the country's ruling family to visit the South. She and the North's ceremonial head of state were on hand to watch teams from North and South march behind a unified flag.

U.S. Vice-President Mike Pence was seated near Kim Yo-jong at the event, though a spokesperson said the two had no contact.