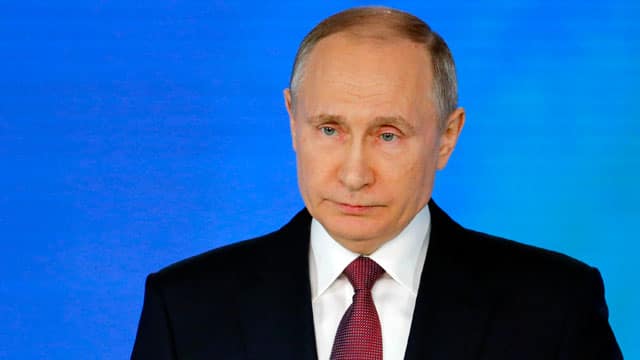 3 years agoVideo
7:49
Russian President Vladimir Putin unveiled a new array of nuclear weapons to the world, during his annual parliamentary address. Defence experts around the world watched Putin's speech, some closer than others, as the address appeared to single out Russia's enemies, including the U.S. However, some nuclear policy experts say Putin could be bluffing, as the weapon systems he revealed today aren't actually deployed — but with a presidential election around the corner in Russia, Putin's target audience may actually much closer to home. 7:49

Speaking in a state-of-the-nation speech, Putin said the weapons include a nuclear-powered cruise missile, a nuclear-powered underwater drone and new hypersonic missile. He said the creation of the new weapons has made NATO's U.S.-led missile defence "useless," and means an effective end to what he described as Western efforts to stymie Russia's development.

"I want to tell all those who have fuelled the arms race over the last 15 years, sought to win unilateral advantages over Russia, introduced unlawful sanctions aimed to contain our country's development: all what you wanted to impede with your policies have already happened," he said. "You have failed to contain Russia."  The announcement comes as Putin is set to easily win another six-year presidential term in the March 18 election.

The CBC's Chris Brown in Moscow said the speech may have been designed in part to allay fears in the Kremlin that, after Putin's 18 years in power, people won't come out to vote for him in large numbers.

"Putin needs a big, strong mandate from people. They're hoping for 70 per cent, and perhaps this was a way to really galvanize the Russian public," Brown said. "This is something that Russians, time and time again, have responded to."

Very cold war-like speech from <a href="https://twitter.com/hashtag/VladimirPutin?src=hash&amp;ref_src=twsrc%5Etfw">#VladimirPutin</a> -- spends five minutes on most topics but devotes 30 minutes to the military, including lots of new civilization destroying weapons, along with the warning to the United States. <a href="https://t.co/J3qGcCMvsE">https://t.co/J3qGcCMvsE</a>

In his address, Putin said that the nuclear-powered cruise missile tested last fall has an unlimited range and high speed and manoeuvrability allowing it to pierce any missile defence.

The Russian leader said the high-speed underwater drone also has an "intercontinental" range and is capable of carrying a nuclear warhead that could target both aircraft carriers and coastal facilities. He said its "very big" operational depth and a speed that is at least 10 times higher than any other vessel would make it immune to enemy interception.

Putin accompanied his statement to an audience of hundreds of senior officials and lawmakers with videos and computer images of new weapons, which were shown on giant screens at a conference hall near the Kremlin.

A computer video showed the drone being launched by a submarine, cruising over the seabed, hitting an aircraft carrier and exploding near the shore. 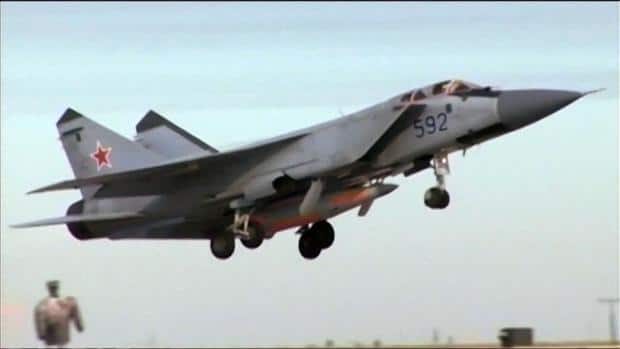 Putin noted that the tests of the compact nuclear reactor to power the new drone were completed last fall.

He added, to applause, that names for the nuclear-powered cruise missile and the drone haven't yet been chosen, and suggested that the Defence Ministry run a nationwide contest for the best names.

"No one in the world has anything like that," he said. "It may appear someday, but by that time we will develop something new."

White told Pentagon reporters that American missile defence has never been about Russia.

The U.S. has consistently argued that missile defence systems in Europe aren't aimed at Moscow, but are designed to defend against threats from Iran, North Korea and rogue threats.

The Russian leader said that another new weapon called Avangard is an intercontinental hypersonic missile that would fly to targets at a speed 20 times the speed of sound and strike "like a meteorite, like a fireball."

Putin said that the weapon is capable of performing sharp manoeuvres on its way to targets, making it "absolutely invulnerable for any missile defence system." 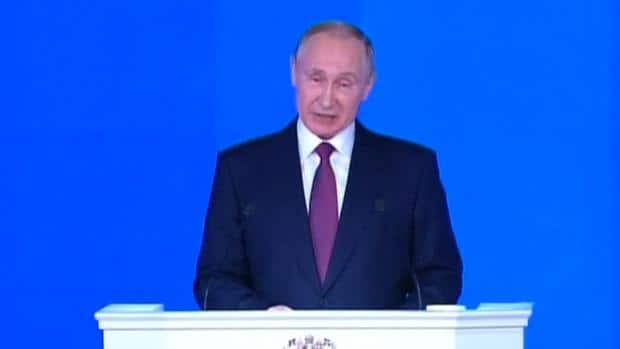 3 years agoVideo
0:39
'Any use of nuclear weapons against Russia ... the response will be immediate and with all due consequences' 0:39

Putin said that Russia also tested a new heavy intercontinental ballistic missile, called Sarmat, with a range and number of warheads exceeding its Soviet-era predecessor, known in the West as Satan.

He said that another new weapons system, called Kinzhal, already has been deployed in Russia's Southern Military District. He added that it's a hypersonic missile carried by an aircraft that flies at a speed 10 times of the speed of sound and has a range of 2,000 kilometres.

The Russian leader emphasized that the development of new weapons that have no equivalent in the West came in response to the U.S. withdrawal from a Cold War-era treaty banning missile defences and U.S. efforts to develop a missile defence system.

He said that the U.S. has ignored Russian complaints.

Putin emphasized that Russia is concerned about the Pentagon-led nuclear review released earlier this year that envisaged the development of low-yield nuclear weapons, saying that it could lower the threshold for using nuclear weapons.

"We will interpret any use of nuclear weapons against Russia and its allies no matter how powerful they are, of low, medium or any other yield, as a nuclear attack," he said. "It will trigger an immediate answer with all the consequences stemming from it. No one should have any doubts about it."

He said that Russian military experts and diplomats would be ready to discuss new weapons systems with their U.S. counterparts.