President Vladimir Putin said during a live call-in show on Russian radio and television that the country's economy would start growing next year and praised Prime Minister Justin Trudeau in a media scrum after the annual broadcast. 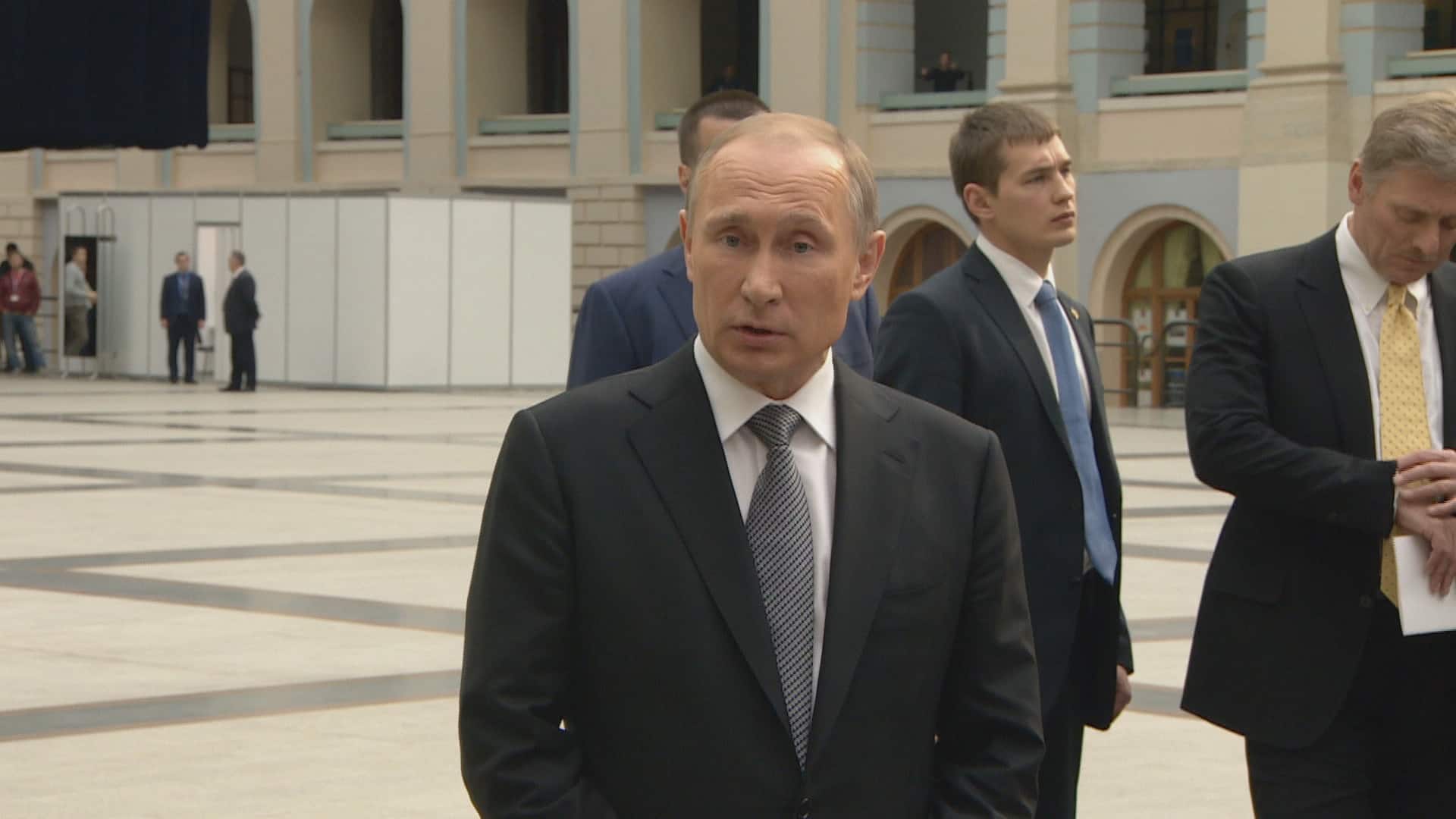 5 years ago
2:07
Vladimir Putin fielded questions from Russians on live TV during his annual call-in show and discussed Canada with Susan Ormiston. 2:07

Canadians can relate to the first question posed to Russian President Vladimir Putin in an open-line question and answer show Thursday: Why are the roads and potholes so bad?

Putin answered the question, which came from a woman in the Siberian region of Omsk, promising results. Less than an hour later, the show relayed "an urgent message" from the Department of Engineering — 21 roads will be fixed by May 1.

It is the president's annual platform to address the Russian Federation, and he uses it to burnish his image as a strong leader who protects Russia from foreign threats and cares about people's needs. Last year's show garnered an audience of 8.5 million.

Although Direct Line is billed as a live event, questions had clearly been vetted in advance.

This year's questions were culled from more than two million submitted to a call centre earlier this week. Putin was comfortable and well briefed to answer queries about everything from the economy and his love life to the conflicts in Syria and Ukraine.

In a large and informal media scrum immediately after the broadcast, CBC News asked Putin about Canada's prime minister and how he saw Canada-Russia relations going forward (watch the video).

With regard to Prime Minister Justin Trudeau, Putin added, "We are acquainted ... we met in Antalya at the G20. We met personally. He expressed how he plans to build relations with Russia. This, to us, was acceptable.

"The way I understand it, the new prime minister of Canada wants to build on everything positive we had in previous years, and that totally suits us. We are neighbours over the North Pole. Strangely, though we are far apart [geographically], we have many mutual interests. We will happily work together."

During the broadcast, many questions surfaced about Russia's foreign relations.

In response to the  question "Who is worse, Trump or Clinton?" Putin said for Russia, it's not who leads the U.S. that matters most. It's how the U.S. treats Russia.

"It's about Russia, which you can't manipulate," he said. "You can't force it to act and dance how you want, to your tune. But if they speak to us with respect, if they look for compromise, like we do, then we will always find solutions that will satisfy us all."

Putin says the United States must abandon its "imperial ambitions" and treat Russia as an equal partner. He added that Washington must learn to respect Russia's legitimate interests and co-operate with Moscow as an equal. Russia-U.S. ties have been strained over the Ukrainian crisis, differences over Syria and other issues.

Putin said that despite the tensions, Moscow and Washington have been able to co-operate constructively on such issues as nuclear non-proliferation, the fight against terrorism and the monitoring of Iran's nuclear program

He warned the U.S. against "speaking from the position of force, diktat and imperial ambitions," adding if the U.S. treats Russia with respect, "we will always be able to find solutions that will satisfy everyone."

On the economy, Putin said Russia's agricultural production has risen even though its national economy has plunged into recession and predicted that the economy would start growing next year.

In a long answer to a question about the U.S. "slandering" of Russia over revelations in the Panama Papers linking Putin to a network of people holding more than $2 billion US in offshore accounts, the Russian president batted away allegations that he benefited from the accounts of friends like cellist Sergey Rodugin.

He said Rodugin used all the money to buy expensive, high-end musical instruments.

He went on to say that the Sueddeutsche Zeitung, the German newspaper that first received the leak of 11.4 million files from the Panamanian law firm Mossack Fonseca, is owned by Goldman Sachs, which Putin took as a clear sign that the U.S. had a hand in the Panama Papers leak.

In a statement on the newspaper's website, managing director Stefan Hilscher said the paper is a "100 per cent subsidiary" of the Sueddeutsche Verlag publishing house, 81.25 per cent of which belongs to a holding company, Suedwestdeutschen Medienholding, and 18.75 per cent of which is in the hands of the Munich publishing family Friedmann.

"Südwestdeutsche Medienholding has no corporate ties to Goldman Sachs," the statement said.

Putin said Russia has shored up the Syrian army to the point where it can conduct offensive operations despite a Russian military drawdown.

After Russia pulled back some of its warplanes from Syria in March, the Syrian army recaptured Palmyra from ISIS, he said.

Putin voiced hope that the Russian- and U.S.-brokered truce would help peace talks in Geneva go forward, paving way for a new constitution and an early election. ISIS and the al-Qaeda-linked Nusra Front have been excluded from the truce.

Commenting on the situation around Aleppo, where fighting has intensified recently, Putin said the Nusra fighters and other opposition forces are positioned close to each other, complicating the situation.

There have been 172 failed drug tests for meldonium worldwide since the Latvian-made heart-drug was banned in 2016. Russian athletes make up the largest contingent of those known to have tested positive so far.

While Putin said he did not think authorities were targeting Russia in the decision to ban meldonium, he criticized the World Anti-Doping Agency for not carrying out research earlier on how long it takes to leave the body.

Some athletes say they stopped taking meldonium before it was banned but have still tested positive.

In one of the more bizarre questions, "drowning" came up this year as it did in 2015.

Last year, the president said he would save U.S. President Barack Obama if he were drowning. This year, he was asked whom he would save first, Ukrainian President Petro Poroshenko or Turkish President Recep Tayyip Erdogan, both of whom are in tense relations with Russia.

Putin's ready reply: "If someone is determined to drown, you cannot save them."

Traditionally, there is a question about the president's love life.

Asked about his ex-wife, Lyudmila Putina, he said she was happy and so was he but wouldn't be drawn into revealing when or if there would be a new first lady.

The president was also asked a few lighthearted questions. When asked what he would wish for if had three wishes from a genie, Putin displayed his typical bravado, saying, "Don't wait for miracles. Act yourself!"

That same bravado came out when a  caller asked if he were forced to eat porridge, would he do it.

"If I'm forced to do anything, I wouldn't do it," Putin said. "But I did have porridge this morning. The fewer teeth you have, the more you love porridge."

With files from The Canadian Press, Reuters