The protest appeared to be the largest in the state since April 15, when supporters of U.S. President Donald Trump organized thousands of people for "Operation Gridlock," jamming the streets of Lansing with their cars to call out what they said was the overreach of Whitmer's strict stay-at-home order.

The slow reopening of state economies around the United States has taken on political overtones, as Republican politicians and individuals affiliated with Trump's re-election promoted such protests in electoral swing states, such as Michigan.

Many people at Thursday's "American Patriot Rally," including militia group members carrying firearms and people with pro-Trump signs, appeared to be ignoring state physical-distancing guidelines as they clustered together within 1.8 metres (six feet) of each other.

"Gov. Whitmer, and our state legislature, it's over with. Open this state," Mike Detmer, a Republican U.S. congressional candidate running for the state's 8th District spot held by Democrat Elissa Slotkin, told the crowd. "Let's get businesses back open again. Let's make sure there are jobs to go back to."

Police allowed more than 100 protesters to peacefully enter the Capitol building around 1 p.m. ET, where they crammed shoulder-to-shoulder and sought access to legislative chambers, some carrying long guns and few wearing face masks.

People had their temperature taken by police as they entered. Inside, they sang the national anthem and chanted: "Let us work."

Other speakers at the event, which had different organizers than the mid-April protest, questioned the deadliness of COVID-19, the respiratory illness caused by the novel coronavirus.

They also said Whitmer's stay-at-home order violated constitutional rights, and urged people to open their businesses on May 1 in disregard of her order.

Exercising right to freedom of speech

State authorities have warned that protesters could be ticketed for violating physical distancing rules. The mayor of Lansing, Andy Schor, said in a statement on Wednesday that he was "disappointed" protesters would put themselves and others at risk, but recognized that Whitmer's order still allowed people to "exercise their First Amendment right to freedom of speech."

State legislative approval of Whitmer's state of emergency declaration, which gives her special executive powers, is set to expire after Thursday. 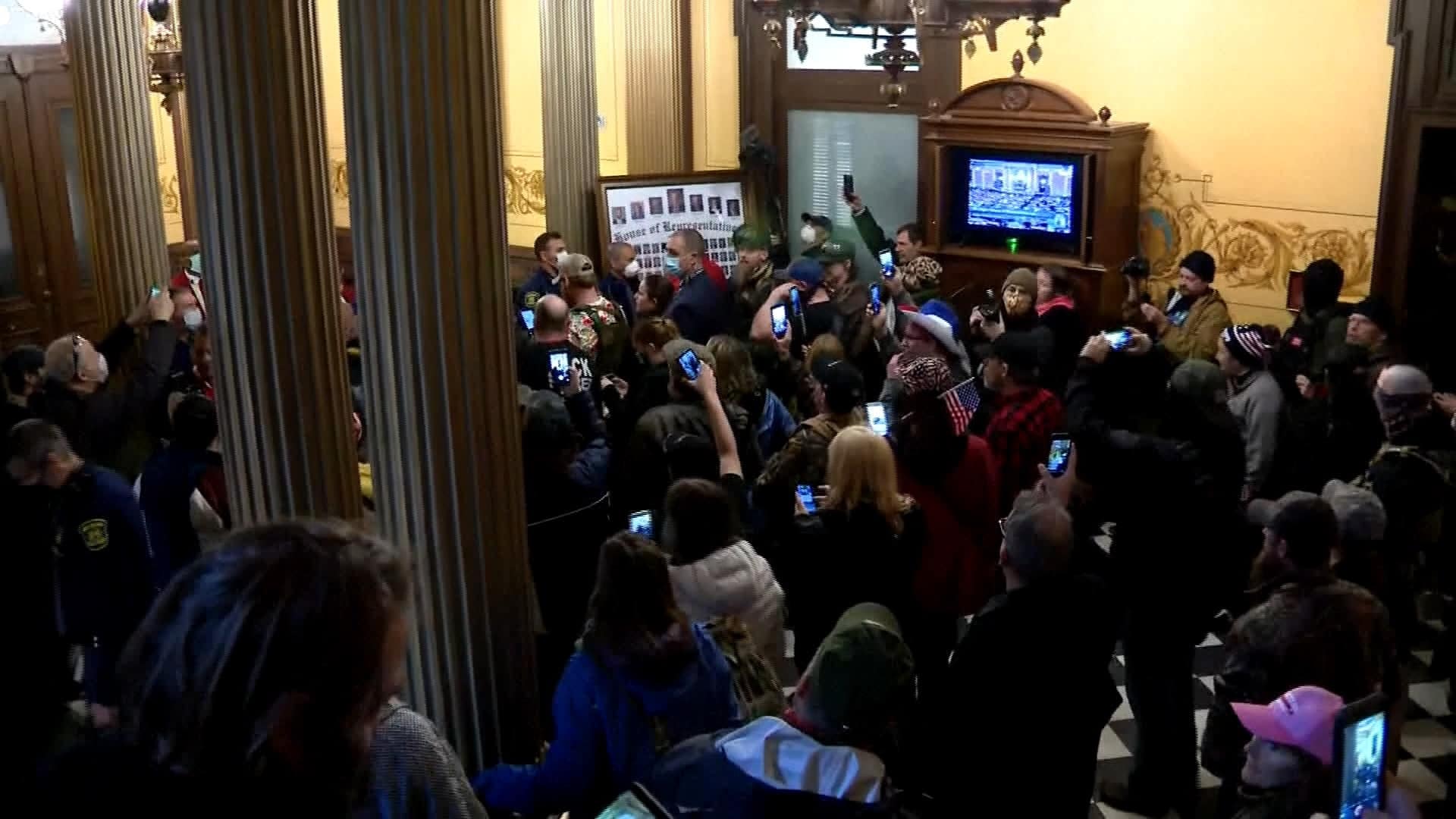 10 months ago
0:38
Hundreds of demonstrators pushed their way in, protesting the governor's COVID-19 emergency measures 0:38

She had asked for a 28-day extension, though Republican lawmakers in control of the statehouse instead voted on bills to replace the state of emergency and her executive orders with "a normal democratic process," according to a statement from Republican House Speaker Lee Chatfield.

Whitmer is likely to veto moves to limit her authority, and state Democrats denounced the Republican efforts as political theatre.

Whitmer contends that her emergency powers will remain in place regardless under other state laws. The stay-at-home order is set to continue through May 15, though she has said she could loosen restrictions as health experts determine new cases of COVID-19 are being successfully controlled.

Whitmer has acknowledged that her order was the strictest in the country, but she defended it as necessary as Michigan became one of the states hardest hit by the virus, having already claimed 3,789 lives there.

Protesters, many from more rural, Trump-leaning parts of Michigan, have argued it has crippled the economy statewide even as the majority of deaths from the virus are centred on the southeastern Detroit metro area.

Many states, including Georgia, Oklahoma, South Carolina and Ohio, have already moved to restart parts of their economies following weeks of mandatory lockdowns that have thrown nearly one in six American workers out of their jobs.