'Protector of the Royal Family': How Prince Philip helped modernize the monarchy

Prince Philip may have the public image of a gruff curmudgeon, but the 95-year-old royal, who is retiring from public duties later this year, has been a vital force in the modernization of the House of Windsor.

Prince Philip has often been viewed as a gruff curmudgeon.

Headlines played up the gaffes he seemed to stumble into, often while dutifully accompanying his wife, Queen Elizabeth, on her travels throughout the United Kingdom and around the world.

Beyond those headlines, however, the 95-year-old royal, who is stepping back from public duties later this year, has been a vital and guiding force for the House of Windsor.

For an institution steeped — some would say bound — by tradition and the past, the notion of modernization may seem oxymoronic.

But Philip, the longest-serving consort to a British monarch, has in many ways been looking ahead.

Harris points, for example, to how Philip supported the unprecedented move to televise the Queen's coronation in 1953. It was a decision, Harris says, that "enabled people around the world, including Canada, to directly engage with the ceremony."

Such engagement was in many ways unheard of and not something everyone favoured, including the British prime minister of the day, Winston Churchill. Philip, however, saw things differently.

"That really pushed the Royal Family into world consciousness like it had never been before," says John Fraser, master emeritus at the University of Toronto's Massey College, where Philip is an honorary senior fellow.

At the same time, there was a push to change the image of the Royal Family.

Philip "tried to make it less austere," says Fraser, who has met the Duke of Edinburgh a few times.

"He was a penniless pauper prince that came into this family which was pretty rigidly orchestrated in their official duties, and he tried to make it a bit more human, I think, more approachable. In that degree, he was a modernizer."

Some of those less austere, more human moments came on the trip Philip and Elizabeth made to Canada in 1951, when she was still a princess and heir to the throne.

Philip sported a white Stetson at a Calgary Stampede event, and there were spontaneous moments on the tour, Harris says.

"There was a sense that this young couple represented a more modern monarchy in the sense that Prince Philip was a fairly worldly figure in many ways."

Never a fan of the media when it came to how they might delve into the private lives of the royals, Philip nonetheless saw how they might be used as an effective tool in creating that new, less austere, more human image.

Seeing them in a new way

Harris notes Philip's involvement in a 1969 documentary that offered a more personal look at his life with the Queen and their four children. In the film, Philip held a barbecue, "allowing the public to see the Royal Family in a way that they had not seen them before."

Philip has been well-known for his philanthropic endeavours — he's involved with 780 charities and organizations — and for his establishment of the Duke of Edinburgh Awards, for which his youngest son, Prince Edward, now travels frequently to present.

But Philip's work behind the royal scenes has received less public attention. He has been what Fraser calls "general manager of Royal Family Inc.," keeping the machinery of the monarchy running.

"He was interested himself in stuff that wasn't really up the Queen's alley, the buildings at Buckingham Palace" and so on, says Fraser. He reorganized the royal estates at Balmoral and Sandringham, the BBC reported, and was the first person to have computers in his office at Buckingham Palace.

But Philip's interests weren't restricted to such practical matters as upkeep and modernization of old buildings. He also offered emotional support and guidance to other members of the family.

"There was all sorts of, dare we say, fake news about his role during the crisis in the Prince of Wales's marriage with Diana," says Fraser, "but I think he tried quite hard to try and be a friend to Diana and pointed out himself as an outsider and how to survive inside a very strange institution."

Whatever the controversy about his role with Diana, there is little doubt about the level of steadfast support Philip has offered the Queen through their nearly 70 years of marriage, 65 of which have seen her as monarch.

The Queen and The Duke of Edinburgh arrive for today's Service for Members of the Order of Merit at the Chapel Royal, St. James's Palace. <a href="https://t.co/K3Ae2JzzVH">pic.twitter.com/K3Ae2JzzVH</a>

The Queen acknowledged as much, describing him as her "strength and stay" during her golden wedding anniversary speech in 1997.

"He was a protector of the Royal Family. He was probably very crucial in sustaining it through this long, long reign, through all sorts of crises," says Fraser.

"The Queen said he was a rock. I think that's a good description."

Of course, Philip has been described in other terms over the years, some of them quite unflattering. A list of gaffes routinely recounted includes his comment during a visit to China in 1986, when he told British students: "If you stay here much longer, you'll all be slitty-eyed." 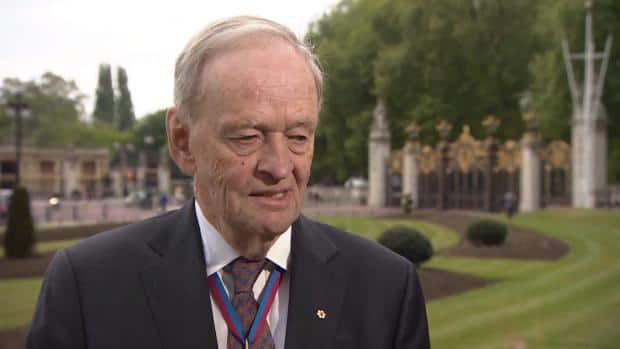 Fraser says Philip been "made into a cartoon figure quite often," and there are numerous stories about his insensitivity and his "slightly arch sense of humour, sometimes at some people's expense."

But with time — and age — perhaps Philip has mellowed, or at least the perception of him.

"He used to be more controversial … but now that he's in his 90s … Prince Philip's comments tend to be viewed more charitably," says Harris.

"Those who have met him — and perhaps it's their first time at a Buckingham Palace reception or garden party — have commented that his sense of humour sometimes helps put people at ease."

A rest from plaque unveilings

That sense of humour was on display again this week when he joked that he was the most experienced plaque-unveiler in the U.K.

With the announcement of his upcoming retirement from public duties, it's unlikely he will unveil many more plaques, but there's no sense Philip will retreat completely from the public eye.

"I don't think it's going to make a huge difference to Prince Philip's life, because he is by nature even at the age of 95 a very active man," says Charles Anson, who served as press secretary to the Queen from 1990 to 1997.

"I think he will still be very actively involved in national life, but he will choose the things that he can do and wants to do."

With files from Renee Filippone