Prince Harry and his fiancée Meghan Markle perform their first official engagements together, to raise awareness of HIV/AIDS and youth crime, since announcing they plan to marry next year.

The couple's visit to Nottingham was their first official commitment since they announced their engagement on Monday. They plan to tour Britain over the next six months to give Markle an opportunity to learn about the country before their May wedding in the chapel at Windsor Castle.

Markle smiled and looked confident as she basked in the adoration of the crowd. Some fans carried British and American flags. 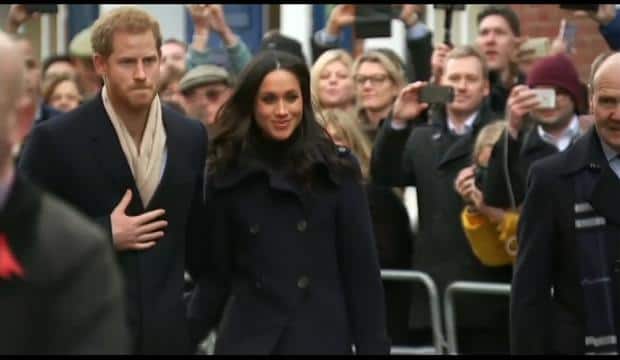 A few were lucky enough to see the engagement ring up close as Markle shook hands. Harry faced the banks of smartphones, all smiles and ease with the attention.

But the ring was old news for British commentators, who instead focused on her handbag — a Strathberry tri-colour leather tote designed in Scotland and handcrafted in Spain. Markle, who was living in Toronto while filming Suits, continued to represent Canadian fashion in a long navy coat by Montreal's Mackage. Markle wore Toronto's Line the Label for the couple's engagement photo shoot earlier this week.

At one point, Markle picked up a glove that a woman in the crowd had dropped and handed it back to her. The crowd responded with appreciative cries of "How sweet!"

Queen Elizabeth's grandson Harry, currently fifth in line to the throne, and Markle, best known for her leading role in U.S. legal drama Suits, announced their engagement on Monday, have ignited a transatlantic media frenzy since their engagement was announced.

They are to be married in May in St George's Chapel at Windsor Castle, the family home of British kings and queens for almost 1,000 years.

On Friday, the couple travelled to the east Midlands in England to visit to a youth project and raise awareness of HIV/AIDS. Their fans followed, including Irene Hardman, 81, who brought a gift bag with fridge magnets and candy for Markle.

Hardman wept with joy after handing the bag to the bride-to-be.

"I cried — she's wonderful, and it's fantastic," Hardman said. "They're so genuine."

The trip was Harry's third to Nottingham since October 2016. He has long championed AIDS charities, following in the footsteps of his late mother, Diana, the Princess of Wales.

She opened Britain's first HIV/AIDS unit in London in 1987 and famously shook hands with and kissed an AIDS patient during a hospital visit.

Friday's World AIDS Day event was held by the Terence Higgins Trust to remember lives lost to HIV and mark the progress made fighting the illness.

Afterwards, the couple visited Nottingham Academy to meet headteachers from local schools to hear about the Full Effect program initiative supported by the charity of Harry and his elder brother, Prince William, and William's wife Kate. The program looks to sway children from becoming involved in youth violence. 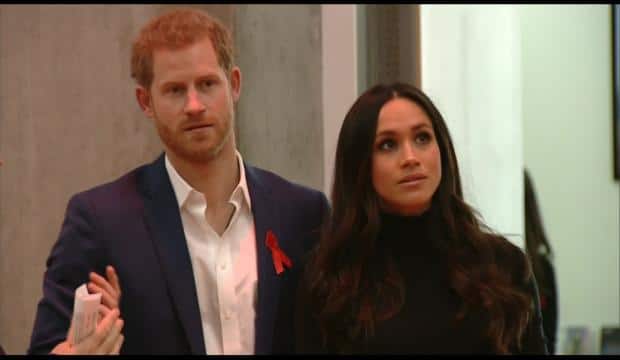 3 years ago
1:08
The prince and his fiancée shake hands and take in exhibits at Terrence Higgins Trust 1:08

Markle, who has been a humanitarian campaigner for a number of causes, including work as a UN women's advocate, is to give up her previous charity roles as she begins life in the Royal Family, Harry's spokesperson said on Tuesday.

I always thought I'd marry Harry, but you can't win them all,- Holly Burdett , royal watcher

She was also keen to travel around Britain to get to know the country that will become her home, the spokesperson added, as she intends to become a British citizen. It is not yet known if she will retain her American citizenship.

Holly Burdett, who is originally from West Bridgford, Nottinghamshire, but now lives in Sydney, Australia, returned home on the "gamble" that the couple would announce their engagement while she was there.

"I always thought I'd marry Harry, but you can't win them all," Burdett joked. "As long as they're happy, that's all that matters."

With files from Reuters and CBC News.