The prince and the rocker: Harry teams up with Bon Jovi at Abbey Road

Prince Harry was at the place made famous by the Beatles to meet American rocker Jon Bon Jovi in one of his last events before stepping back from his official duties for the Royal Family.

When Prince Harry went to Abbey Road Studios in London on Friday, he wanted the Invictus Games to be the focus.

But hanging over his meeting with American rocker Jon Bon Jovi at the studio the Beatles made famous were questions about what happens when Harry and his wife, Meghan, step away from their royal duties next month.

Bon Jovi was at the studio to record a song with veterans to help raise money for the Invictus Games Foundation — the international sporting competition Harry helped create to support injured veterans and soldiers.

On Friday, Bon Jovi admitted he couldn't give any advice to the prince, but voiced his support.

"All I can say is that none of us in America, especially, know what it is like to walk in their shoes, but our admiration for his family … is deep," Bon Jovi said.

"I just think the world of them, and I just want to give them a hug." 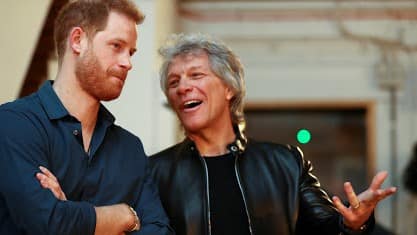 'I just want to give them a hug': Bon Jovi sympathizes with Harry and Meghan

8 months ago
0:54
The musician collaborated with Prince Harry on a charity song for the Invictus Games. 0:54

Over the next 10 days, Harry and Meghan will make a number of appearances as senior royals, including on March 9 for Commonwealth Day, when they will be joined by the rest of the Royal Family at Westminster Abbey.

After March 31, they will no longer carry out engagements on behalf of the Queen.

The couple is understood to be living at a home on Vancouver Island, and have said they intend to split time between North America and the U.K.

There have been questions around who will be paying for their security but CBC News has learned the Canadian government will not pay for RCMP protection for the couple after next month.

Even Bon Jovi joked about how he would address Harry earlier this week during an interview with a British radio station, but said he decided he would just call him "the artist formerly known as prince."

Harry and Meghan have said that they intend to become financially independent and launch a charitable entity of their own, but they have been told that they cannot use the Sussex Royal label for any of their initiatives.

"It has not been the smoothest of exits," said Camilla Tominey, an associate editor with The Telegraph newspaper.

She said the couple has a number of patronages in the U.K., and though some charities may be worried the couple's move overseas will affect how much of a commitment they can continue to make, it is clear the Invictus Games are a passion project for Harry.

"It has always been his baby."

Inside Abbey Road, a group of veterans sang backup for the Bon Jovi track, Unbroken, which will be released next month.

Matt Lyons, who was in the British Army's Royal Logistics Corps for 26 years, is part of the Invictus choir, and has been diagnosed with post-traumatic stress disorder after serving in Afghanistan.

He shrugged off questions about whether Harry's change in status would mean anything to veterans.

"He's always going to be here for us," he said.

"I think that's something special because it is close to his heart."