​U.S. President Donald Trump's declaration of victory in reaching a preliminary deal with Mexico to replace the North American Free Trade Agreement has raised at least as many questions as it has answered.

​U.S. President Donald Trump's declaration of victory Monday in reaching a preliminary deal with Mexico to replace the North American Free Trade Agreement raised at least as many questions as it answered.

Can Canada, the third member country in NAFTA and America's No. 2 trading partner, be coaxed or coerced into a new pact?

If not, is it even legal — or politically feasible — for Trump to reach a replacement trade deal with Mexico alone?

And will the changes being negotiated to the 24-year-old NAFTA threaten the operations of companies that have built sophisticated supply chains that span the three countries?

​"There are still a lot of questions left to be answered," said Peter MacKay, former minister of justice, defence and foreign affairs, who is now a partner at the law firm Baker McKenzie. "There is still a great deal of uncertainty — trepidation, nervousness, a feeling that we are on the outside looking in."

Trump was quick to proclaim the agreement a triumph, pointing to Monday's surge in the stock market, which was fuelled in part by the apparent breakthrough with Mexico.

"We just signed a trade agreement with Mexico, and it's a terrific agreement for everybody," the president declared. "It's an agreement that a lot of people said couldn't be done."

Trump suggested that he might leave Canada out of a new agreement. He said he wanted to call the revamped trade pact "the United States-Mexico Trade Agreement" because, in his view, NAFTA has earned a reputation for being harmful to American workers.

But first, he said, he would give Canada a chance to get back in — "if they'd like to negotiate fairly." To intensify the pressure on Ottawa to agree to his terms, the president threatened to impose new taxes on Canadian auto imports. 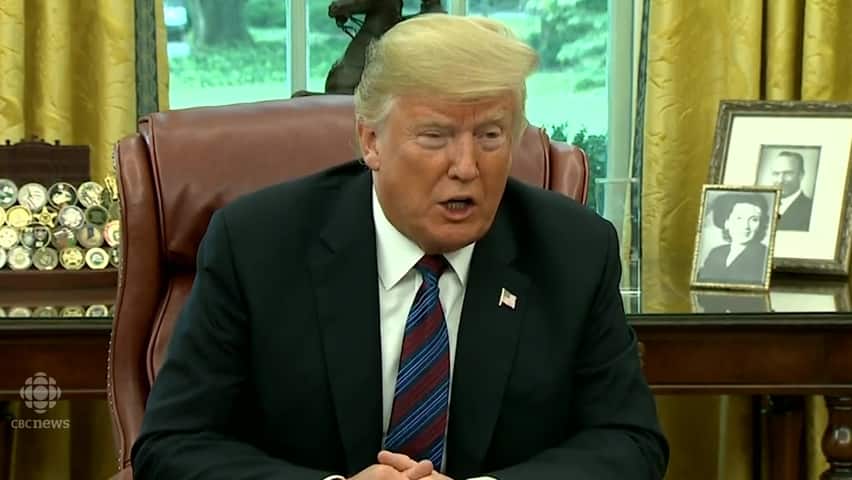 Canada's NAFTA negotiator, Foreign Minister Chrystia Freeland, is cutting short a trip to Europe to fly to Washington on Tuesday to try to restart talks.

"We will only sign a new NAFTA that is good for Canada and good for the middle class," said Adam Austen, a spokesperson for Freeland, saying "Canada's signature is required."

"Let's make a great deal like we just made with Mexico," Kudlow said. "If not, the U.S.A. may have to take action."

Critics denounced the prospect of cutting Canada out a North American trade pact, in part because of the risks it could pose for companies involved in international trade. Many manufacturers have built vital supply systems that depend on freely crossing all NAFTA borders.

Noting the "massive amount of movement of goods between the three countries and the integration of operations," Jay Timmons, president of that U.S. National Association of Manufacturers, said "it is imperative that a trilateral agreement be inked."

Trump has frequently condemned the 24-year-old NAFTA trade pact as a job-killing "disaster" for American workers. NAFTA reduced most trade barriers between the three countries. The president and other critics say the pact encouraged U.S. manufacturers to move south of the border to exploit low-wage Mexican labour.

The preliminary deal with Mexico might bring more manufacturing to the United States. Yet it is far from final. Even after being formally signed, it would have be ratified by lawmakers in each country.

The U.S. Congress wouldn't vote on it until next year — after November midterm elections that could end Republican control of the House of Representatives. But initially, it looks like at least a tentative public relations victory for Trump, the week after his former campaign manager was convicted on financial crimes and his former personal attorney implicated him in hush money payments to two women who allege they had affairs with Trump.

Before the administration began negotiating a new NAFTA a year ago, it had notified Congress that it was beginning talks with Canada and Mexico. So Monday's announcement raises the question: Is the administration authorized to reach a deal with only one of those countries?

A senior administration official, who briefed reporters on condition of anonymity, said yes: The administration can tell Congress it had reached a deal with Mexico — and that Canada is welcome to join.

But other analysts said the answer wasn't clear: "It's a question that has never been tested," said Lori Wallach, director of the left-leaning Public Citizen's Global Trade Watch.

Mexico will have a difficult time selling 'Trump's deal' back home if Canada does not think it is a good deal.- Daniel Ujczo , trade lawyer

Even a key Trump ally, Rep. Kevin Brady, the Texas Republican who chairs the House ways and means committee, expressed caution about Monday's apparent breakthrough. Brady said he looked forward "to carefully analyzing the details and consulting in the weeks ahead to determine whether the new proposal meets the trade priorities set out by Congress."

And the No. 2 Senate Republican, John Cornyn of Texas, while hailing Monday's news as a "positive step," said Canada needs to be party to a final deal.

"A trilateral agreement is the best path forward," Cornyn said, adding that millions of jobs were at stake.

There are political reasons to keep Canada inside the regional bloc.

"Mexico will have a difficult time selling 'Trump's deal' back home if Canada does not think it is a good deal," said Daniel Ujczo, a trade lawyer with Dickinson Wright PLLC. "It will appear that Mexico caved."

Indeed, Mexico has said it wants Canada included in any new deal to replace NAFTA.

"We are very interested in this being an agreement of three countries," said president-elect Andres Manuel Lopez Obrador. At the same time, Foreign Minister Luis Videgaray told reporters that "Mexico will have a free trade agreement regardless of the outcome" of U.S.-Canada negotiations.

The Office of the U.S. Trade Representative said Mexico had agreed to ensure that 75 per cent of automotive content be produced within the trade bloc (up from a current 62.5 per cent) to receive duty-free benefits, and that 40 per cent to 45 per cent be made by workers earning at least $16 an hour. Those changes are meant to encourage more auto production in the United States.

For months, the talks were held up by the Trump administration's insistence on a "sunset clause": A renegotiated NAFTA would end after five years unless all three countries agreed to continue it. Mexico and Canada considered that proposal a deal killer.

On Monday, the Trump administration and Mexico announced a compromise on that divisive issue: An overhauled NAFTA would remain in force for 16 years and would be reviewed every six years.