'We don't want to be the next cancer village': Canada's plastic recycling dumped and burned overseas

Canadians have long been taught to sort and recycle their plastic into our blue bins. But an undercover Marketplace investigation uncovered huge piles of Canadian plastic dumped and burned overseas in illegal Malaysian landfills, polluting rivers and sometimes creating toxic byproducts that people say are making them sick.

'Canadians would be ... shocked,' expert says as Marketplace poses as fake company to expose illegal recycling

Fumes spewed from the machinery as workers — wearing only T-shirts, sandals and no masks — at a recycling factory in northern Malaysia manually sorted through mountains of plastic scrap.

The workers, mainly from Bangladesh, earned around $12 a day, sometimes toiling seven days a week.

The labour was "very cheap," said one businessman, as he gave a tour to undercover CBC Marketplace journalists posing as plastics brokers from a fake Canadian company.

The factory was willing to buy the dirty plastic being offered — and said they would break the country's strict importing laws to do it, advising the journalists to lie on the shipping container labels.

"We can start trying with two to four [shipping] containers and see," said the manager.

"If the [Malaysian] government knew, they would shut it down? Illegal?" asked one of the CBC journalists.

"Yeah," replied one of the factory's business partners.

Canadians have long been taught to sort and recycle their plastic, dropping it in the blue box with the thought that it will be transformed into something new.

"I think [Canadians] will be highly disturbed… to see what actually happens to their recycling," said Myra Hird, an expert on waste management from Queen's University.

"I don't think Canadians want this at all. I think Canadians would be highly shocked," she said. "They should be, by realizing what is actually happening to the stuff that they're so diligently washing and cleaning and organizing into those bins."

The global recycling industry has been under intense scrutiny in recent years. At the beginning of 2018, China stopped taking in much of the world's recycling, leaving an entire industry scrambling for new markets.

Businesses turned their attention to southeast Asia: Cambodia, Vietnam, Thailand — and eventually Malaysia, which, at one point, became the world's biggest importer of plastic scrap.

Canada alone exported more than 10,000 tonnes of plastic scrap to Malaysia in 2018.

As a result of this shift, illegal and unlicensed factories have popped up en masse.

Marketplace went undercover in Malaysia to investigate the plastic industry. Here's what we learned:

How Marketplace went undercover in Malaysia to investigate the plastic industry

Marketplace wanted to know how easy it was to get recyclable Canadian goods overseas into countries with heavy restrictions on importing post-consumer plastics, like Malaysia.

So the team posed as a fake company called MarketPlastics, and then, using shipping records, reached out to several Malaysian companies believed to be importing Canadian plastic.

MarketPlastics was pitched as a plastics broker looking to find new end markets for a glut of Canadian plastics it needed to unload. The meetings were largely set up in northern Malaysia, the current epicentre of recycling after a government crackdown in another region of the country.

'We don't want to be the next cancer village'

When Marketplace journalists arrived in Malaysia, the environmental toll to which Canadian recycling has contributed was on full display: A towering dump of plastic waste, burning, and runoff from factories streaming into rivers used by the local population.

At one location, in Ipoh, the waste was stacked two storeys high and spanned about the length of two football fields. Large pools of chemicals had formed, cascading down from the top of the heap. It was one of the many dumps in the country — this one full of Western plastic from around the world: England, United States, Denmark and Canada.

Further south, at a factory that had been shut down following a government raid, Marketplace discovered mountains of soft film plastic from major Canadian brands: Loblaws, Canadian Tire, even a grocery bag from a retailer in Langley, B.C.

"I think this is not called [recycling], they ... polluted the environment," said Lydia Ong, a former Malaysian politician turned environmental activist.

Ong has been an outspoken critic of her country's rapidly growing recycling industry and the West's appetite to send its plastic overseas. "I've been telling the government that … we don't want to be [an] international rubbish bin," she said.

Ong took Marketplace to a forest-turned-wasteland, where the air was noticeably acrid and plastic bits were scattered among the piles of ash. According to Ong, unscrupulous recyclers had taken 200 tonnes of unwanted plastic and burned it there.

"So the factory … they dump all the waste that they cannot recycle anymore. Or they don't use anymore. Or low value. They dump [it] here," she said.

Ong said she's concerned about the health impacts illegal factories and their actions are having on the population in northern Malaysia. When plastic burns, it releases harmful and potentially carcinogenic chemicals known to harm human health. It can also have devastating effects on the environment.

"We don't want to be the next cancer village," she said.

Marketplace was also taken to Sungai Petani, which sits next to two major rivers and has experienced heavy industrialization in recent years. People were fishing there and the water is used to irrigate farms in the area. But the water was also noticeably discoloured, filled with millions of floating plastics bits.

Local resident Evon Chee said she and her family have been exposed to daily burning in the region over the past year, as more factories continue to pop up.

Her son has been getting coughs and fevers, and she often has to keep him inside. She said she's scared it could become more serious.

"My son is always getting sick," said Chee.

She has a message for Canadians: Don't send your rubbish here.

'We will not become a dumping ground'

The Malaysian government says it has shut down close to 150 factories. It also heavily restricted the import of plastics — only 62 companies are officially allowed to bring it into the country. But Canadian shipments continue to pour in.

"It's a huge problem for us," said Yeo Bee Yin, Malaysia's minister of energy, science, technology, environment and climate change.

"We have been receiving many garbage [loads] from developed countries.… The amount of it that came into Malaysia was just so huge that it actually impacts the environment," said Yin. "It is actually very shocking when you see that, and I feel very angry."

In June, authorities seized thousands of tonnes of Canadian plastic that arrived at a northern Malaysian port, according to local news reports. The containers were said to be lined with plastic in the front — but full of waste at the back.

In May, Marketplace producers were on the ground in Malaysia when the authorities found a shipping container filled with plastic bags and packaging from several well-known Canadian brands during a raid at Port Klang, near the country's capital, Kuala Lumpur.

Yin and her ministry have been trying to return the container to Canada, saying they could escalate the matter and take their concerns to the international community if the Malaysian company that imported the waste cannot be forced to ship it back.

"We will not become a dumping ground and I will do the best I can to make sure that I will dump back your garbage to your own country," said Yin.

A spokesperson from the Ministry of Environment and Climate Change told Marketplace it was aware of "two potentially non-compliant shipments of plastic waste from Canada to Malaysia," and that it was "working closely with the Malaysian government to resolve any outstanding issues."

Companies in Malaysia caught dumping and burning plastic could face fines, have their factories shut down or potentially be slapped with jail time. Other indiscretions, like tampering with import permits, can see those permits — or even a business licence — revoked.

But with the business of buying plastic being so lucrative, some companies had no problem breaking the law. In one instance observed by Marketplace, the CEO of a major Malaysian recycler said he gets paid a "little bit" — a reference to kickbacks — when helping other companies that aren't allowed to import the materials.

While Australia recently has vowed to ban the export of recyclable waste, Canada has not committed to going that far.

Instead, a spokesperson from the Ministry of Environment and Climate change told Marketplace it plans to heavily restrict the export of plastic through an international treaty, known as the Basel Convention, as of 2021.

It also is "looking at what else our government can do to reduce the amount of Canadian garbage that is ending up overseas," the spokesperson said.

As for Hird, she says Canadians need to start demanding action from their government, as well as start keeping better track of their own garbage.

"We're very, very clearly not taking the high moral ground here at all," she said. "We are setting a horrible example for other countries around the world." 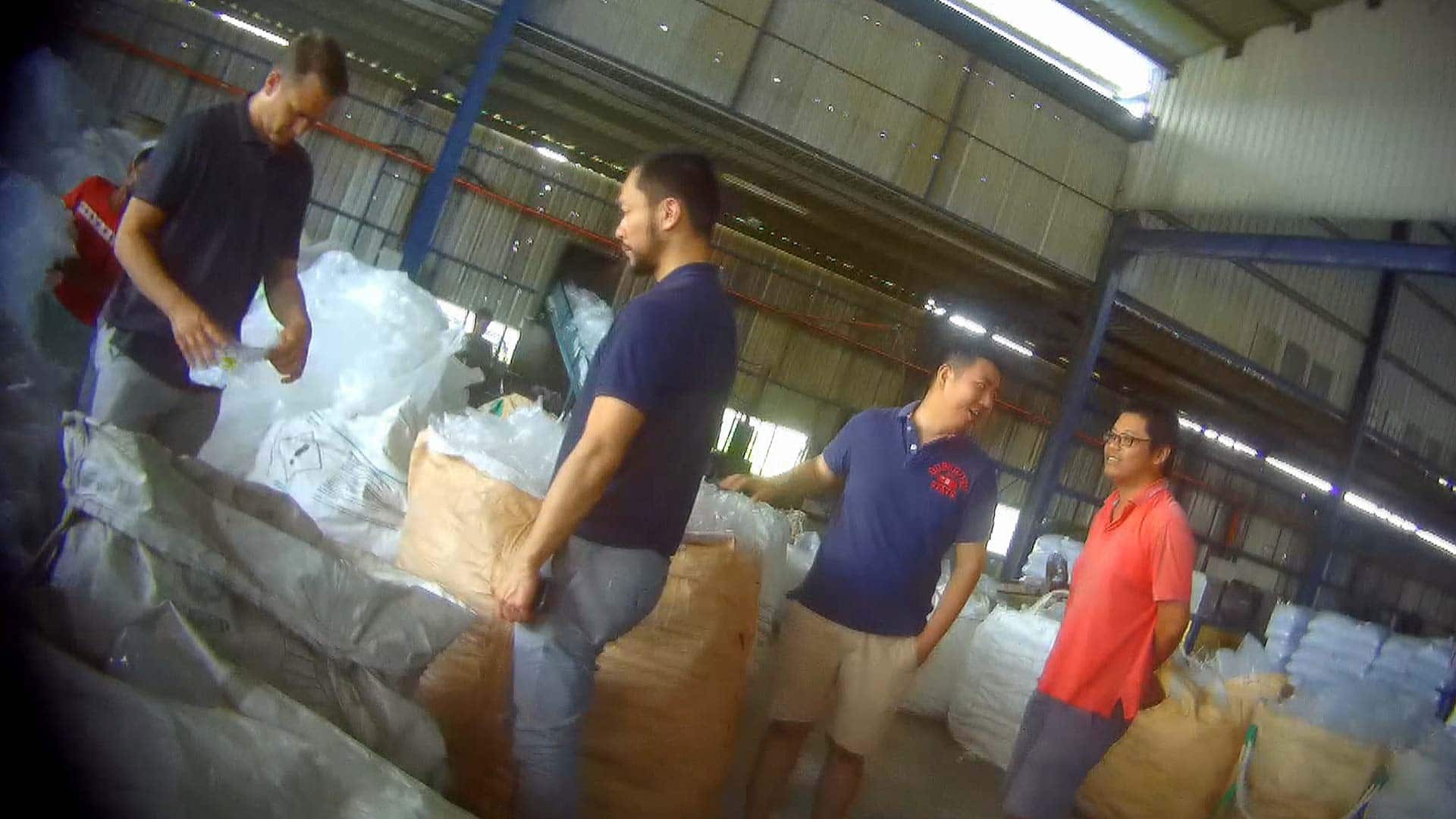 Behind the scenes: Marketplace goes undercover in Malaysia

1 year ago
0:39
Posing as recycling brokers, Marketplace discovered that despite government restrictions, some Malaysian companies are still willing to break the law to buy Canadian plastic. 0:39
CBC's Journalistic Standards and Practices|About CBC News