Trump’s bad day started in the morning with his ex-campaign chair Paul Manafort convicted for bank and tax fraud. Later, his ex-lawyer and “fixer” Michael Cohen made a plea deal on campaign finance violations and other crimes — with the potential for directly implicating Trump.

Mueller's Russia probe scores a political win as jury convicts Manafort, but Cohen's deal may be most damning

It rained like heck on Tuesday in Washington. But boy, did it ever pour on Donald Trump's 577-day-old presidency.

Court rulings in two states could lead to a torrent of legal trouble for Trump, courtesy of two former aides with inside information that could potentially be offered to prosecutors to save themselves from harsher jail time.

Trump's bad day started with his ex-campaign chairman Paul Manafort convicted on eight counts of bank and tax fraud. It ended up potentially worse for the president in the afternoon, with his ex-lawyer and "fixer" Michael Cohen copping a plea deal on tax fraud, bank fraud and — most remarkably for potentially implicating Trump — campaign finance violations.

Both Cohen and Manafort. In one day.

They're not all the president's men, but they represent two of the most worrisome prospective witnesses against Trump, legal experts say. Particularly given the jail time they each face, as well as what they might or might not be able to offer to the U.S. special counsel investigating Russian collusion in the 2016 election as well as federal prosecutors interested in other crimes.

"If they decided to co-operate [with government lawyers], they could potentially have incriminating information about the president. They're both huge," said Harry Sandick, a former federal prosecutor with the Southern District of New York.

Sandick said that despite not being directly related to the question of election interference or collusion with Russia, Manafort's conviction nevertheless delivers a strong rebuttal to the president's attacks on special counsel Robert Mueller's Russia probe, which Trump has called a "witch hunt."

Mueller's team has now been tested and prevailed in the first criminal trial to come out of the sprawling investigation, which could give him leverage when pursuing lines of inquiry more directly related to the Russian investigation.

Putting that aside, though, the more troubling news for the president might be what Cohen has to share.

"Let me put it this way," Sandick said. "Today, in court, in Manhattan, before a federal judge, the president's [former] lawyer accused the president of committing a crime."

Prosecutors say the payoffs brokered by Cohen amounted to an illegal contribution to Trump's campaign.

Trump has denied any knowledge about the payments to Daniels or McDougal.

Cohen's plea agreement doesn't include co-operation with the Southern District of New York, but Sandick said "that doesn't completely foreclose the idea that [Cohen] can be a co-operator in the future as part of another deal."

That's what excites Seth Abramson, an anti-Trump commentator with a strong liberal following. He expects Cohen to cave eventually and co-operate, allowing the government to share useful information with Mueller's collusion investigators.

To Abramson, it underscores how much of an unmistakable coup it is to have legal pressure on Manafort and Cohen.

"It's the worst day of Trump's presidency so far. I can't think of two men who present more legal jeopardy for the president than these two," he said. "Mueller now has in his grasp what you might consider the two most important, the most dangerous witnesses to have … with respect to collusion."

'You can imagine fear and concern'

Manafort, facing years in jail, may be under greater pressure to strike a sentencing agreement now before his second criminal trial next month in Washington, D.C. Abramson believes Manafort could also fill in the blanks when it comes to possible campaign activities and "whether or not he had agreements with Russian nationals relating to his presidential run."

this is the worst hour of Trump's entire presidency--no, make that entire life

As far as Cohen goes, Abramson noted Cohen's work with Felix Sater, a Russian-American businessman who tried to help build a Moscow Trump Tower in 2015 while Trump was campaigning, offers Mueller "enormous leverage."

Manafort now faces a grim choice if he loses an appeal: He can spend years behind bars, strike a deal to divulge all he knows to the Trump-Russia probe, or pray for a pardon. 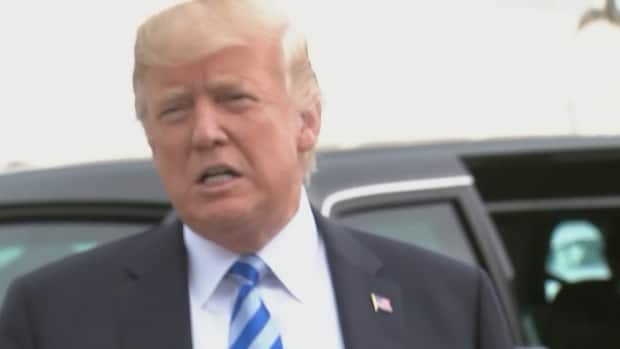 3 years ago
0:16
Trump spoke to reporters on his way to a rally in Charleston, W. Va., saying Manafort guilty finding is 'a very sad thing that happened' 0:16

On conservative talk radio, host Sean Hannity played down the amount of legal jeopardy the president is facing.

Hannity questioned whether Cohen would even be a credible witness, given his previous statements that Trump didn't know about the hush money. Lawyer Joe DiGenova, a guest on Hannity's show, also jumped to the president's defence, claiming that "payments made with the knowledge of the candidate are not necessarily illegal, per se."

DiGenova relented on Manafort, however, conceding, "It is a win for Mueller, I hate to say it." But he added that his convictions were "for something unrelated to collusion — so in that sense, it's a defeat."

Now that he's been convicted, "you can imagine fear and concern on the part of the president," former federal prosecutor Renato Mariotti said. "He'll say publicly it doesn't matter, it's unfair, at some point he may pardon Manafort. But regardless, it's got to make him concerned and thinking about who's next? Potentially, his son Donald Jr."

More targets in Mueller's probe will likely take notice of Manafort's fate, especially if he lands a decades-long prison sentence. That could lead to greater co-operation.

In the meantime, Cohen, who once vowed he would "take a bullet" for Trump, has now suggested his former boss is an unindicted co-conspirator, said former U.S. attorney Alex Little.

"If your personal lawyer is pleading guilty to federal crimes, it certainly suggests that your hands are not clean."

Manafort, on the other hand, "potentially holds the keys to some really dangerous information about Trump and Russia," Little said. "And so if there's strong evidence linking Trump to a foreign power, that's the sort of thing that's very difficult for Republicans and a vast majority of the American public to excuse away."

"This is a historically bad day," he said. "No president has had as bad a day as this since the day Richard Nixon resigned."