Nina’s story is the story of hundreds of Parisians who simply wanted to have a good time on a Friday night in one of the most open-minded and liberal cities in the world. Instead they experienced the terror of their lives.

'Even now sometimes I wonder: Did I survive? Am I still here?' 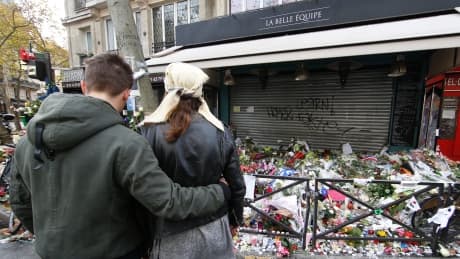 5 years ago
22:03
Harrowing accounts of the Paris attacks, from people caught in the carnage. 22:03

This is part two of a two-part series by The National on the Paris attacks. Watch part one here.

In the late afternoon of an unseasonably warm evening of Nov. 13, Nina walked into one of her favourite Parisian bars, La Belle Équipe, to say goodbye to a large group of friends and colleagues.

She was leaving her current job in the neighbourhood. Because there were so many of them, the restaurant couldn't accommodate their request to sit outside — a lucky twist of fate, as it turned out several hours later.

When Nina's night out ended in the late evening, La Belle Équipe was the site of a massacre with 19 dead and dozens wounded.

Nina's story is the story of hundreds of Parisians who simply wanted to have a good time on a Friday night in one of the most open-minded and liberal cities in the world. Instead they experienced the terror of their lives and are still reliving the hell they saw. And they are the survivors.

What made Nina's story even more poignant is that at one point in the evening, she walked outside to have a smoke and on the way back, she ran into a young girl who was herself coming out to do the same thing. Nina barely sat down at her table inside when the automatic gunfire began.

In what seemed like an eternity — it was really just a few minutes — everything changed. When we interviewed Nina (who didn't want her last name used), she told us that she wouldn't give us any details about what she saw outside on the terrace when she finally walked out. Except for one thing.

"The noises stopped and someone started screaming 'you can stand up, they left.' It's this exact minute you start looking around you and you realize what happened. You realize that most of the people did not stand up like you did.

At this point in the interview, Nina became very emotional, looking down at the ground while she continued to talk. It's an image that can never leave her.

"I see that girl lying on the floor at the place I was smoking a cigarette 30 seconds before the attack and each time you're just wondering: Am I this girl lying on the ground? Or am I here where I am actually? Did I survive? Is it my phone ringing? And it takes you maybe one minute to realize you're alive.

"Even now sometimes I wonder: Did I survive? Am I still here?"

Like Nina, many Parisians are still in that state of shock, with one lasting image of the attack — whether they were the targets of the attackers, eyewitnesses to the massacres or just bystanders who simply tried to help in the aftermath.

CBC's The National visited Paris to investigate questions raised about the official handling of the attacks. Watch The National's in-depth look at the remarkable stories of the survivors here.