Angel Colon and friends were hugging and saying their goodbyes early Sunday morning when they heard the first gunshots at Pulse nightclub in Orlando, Fla.

Shot and trampled on the floor, young club-goer recounts harrowing scene as gunman finished off victims 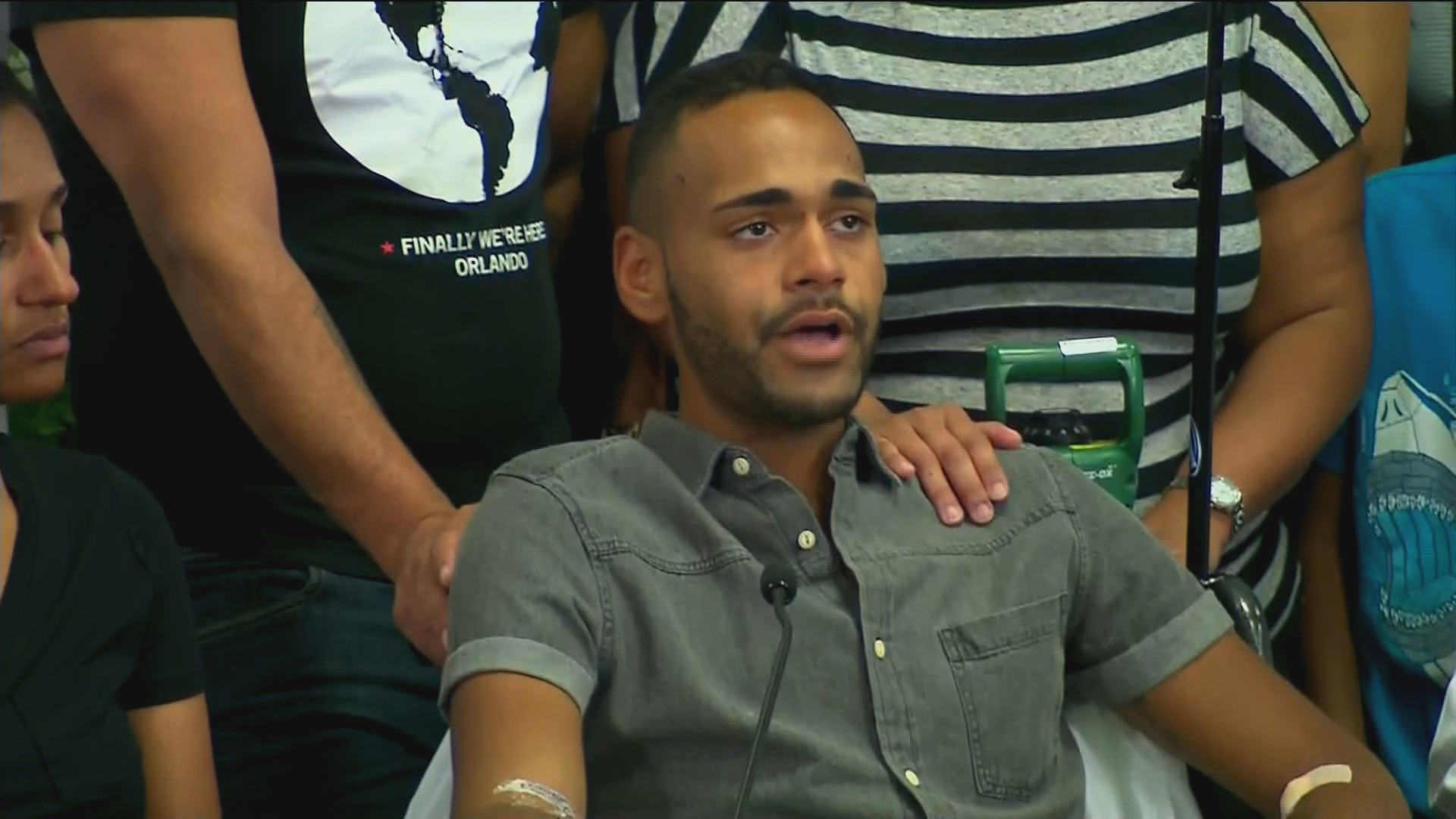 5 years ago
3:30
Today we heard first-hand accounts of the chilling and gruesome details of a night of terror in Orlando. 3:30

Angel Colon and his friends were hugging and saying their goodbyes early Sunday morning when they heard the first gunshots ring out at Pulse nightclub in Orlando, Fla.

"It was a great night. No drama — just smiles, just laughter," Colon said Tuesday morning about what had been a fun night out before a gunman broke that laughter, ultimately killing 49 and wounding dozens more.

Sitting in a wheelchair, Colon was speaking to a room packed with reporters and doctors at Orlando Regional Medical Centre (ORMC), one of three area hospitals that struggled to take in the victims of the deadly rampage.

Colon, 26, said he was talking to another club-goer when they heard the first gunshot and panic broke out. There were about 300 people in the club at the time. "Everyone started running," he said.

Colon said he was shot three times in the leg, fell to the ground and was trampled in the ensuing chaos, shattering his bones.

"All I could do was just lay down there while everyone was just running on top of me," he said. "And all I could hear was the shotgun one after another, and people screaming, people yelling for help."

Colon described the chilling scene that followed the initial gunfire and chaos, as the gunman, 29-year-old Omar Mateen moved through the club, making sure his victims were dead.

Mateen would later die in a shootout with police, some three hours after he first arrived and opened fire with an assault rifle and handgun.

"He's shooting everyone that's already … on the floor," Colon said.

Colon said Mateen was getting closer to him. "I look over and he shoots the girl next to me. And I'm just there lying down. I'm thinking, 'I'm next, I'm dead.'"

Colon said Mateen shot "toward my head," but "by the glory of God," he got hit in the hand instead. A second shot struck his hip. Colon said he didn't react.

"I was just prepared to just stay there, lying down, so he won't know that I'm alive."

Mateen kept shooting for five or 10 minutes, Colon said, until police arrived and drew his fire.

That's when Colon was rescued, though not without much more pain. He said an officer saw him, realized he was alive, and did what was necessary to get him out of the club.

"He grabs my hand and he's like, 'This is the only way I can take you out,'" Colon recalled.

He couldn't walk, so the officer dragged him across the floor, which was littered with broken glass. He said it cut into his legs, back and rear.

"I don't feel pain, but I just feel all this blood on me from myself, from other people, and he just drops me off across the street," Colon said.

"I wish I could remember his face," he said.

Patience Carter, another survivor who was in the nightclub on Sunday, also spoke to reporters about what she saw during the attack. She is still recovering in hospital after being shot. One of her friends was killed.

As gunfire began, Carter said she rushed into one of the club's bathrooms. That's where Mateen soon joined them, shooting his gun, making phone calls to 911 and talking with the victims.

"I could see piles of bodies lying over the toilet seat and slumped over in the bottom of the toilet, which is covered with hand prints and blood," she told reporters.

"I was begging for God to take the soul out of my body because I didn't want to feel any more pain."

More than 48 hours after the chaotic scene that followed the shooting, roughly half of the patients who were rushed to Orlando-area hospitals have yet to be released, doctors said later during the at-times-tearful news conference.

ORMC chief trauma surgeon Dr. Michael Cheatham said 27 of the 44 patients who were taken to emergency rooms in the area early Sunday are still hospitalized. Nine of those 44 were too far gone to be saved, he said.

Six people remain in intensive care, including one who was shot in the head. Six others are in critical condition, with four in "guarded" condition. All the patients are expected to survive, though Cheatham said one or two are "profoundly ill" and may be permanently disabled.

"They were dropped off in truckloads, in ambulance-loads," recalled Dr. Kathryn Bondani. The hospital ran out of ambulances, so firefighters, police and truck-driving citizens ferried the injured.

Choking up a bit, the attending trauma surgeon on call that night, Dr. Chadwick Smith, described how he and others called for reinforcements.

The trauma centre is used to handling four or five people each shift.