Officials say the fire is out at a drilling rig that exploded in eastern Oklahoma. Five rig workers are missing.

Five workers were missing after a fiery explosion on Monday at an oil and gas drilling site in eastern Oklahoma, officials said.

The fire had been fed by gas from a well being drilled for Red Mountain Energy by Patterson-UTI Energy Inc, preventing a full search of the scene throughout the day, but was later extinguished, the Pittsburg County Emergency Management Department (PCEMD) said in a statement. 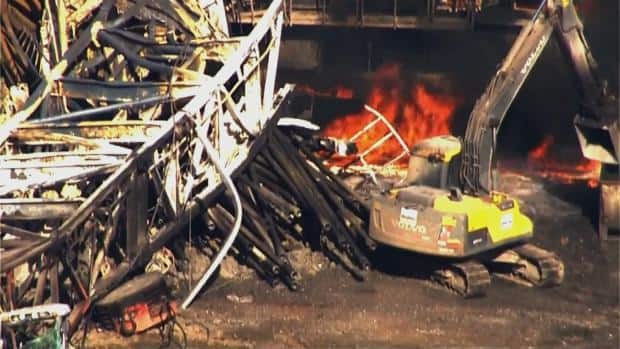 Houston-based Patterson-UTI said in a statement late on Monday the cause of the well explosion remained unclear. It said three of the five missing workers were its employees. Patterson-UTI declined to identify the workers, who were also
not identified by local authorities.

"Well control experts and emergency responders are on site and we will conduct a thorough investigation when the incident is fully contained," Patterson-UTI chief executive Andy Hendricks said in a statement.

PCEMD director Kevin Enloe said one of the 22 workers at the site when the explosion occurred was treated for injuries and 16 others were uninjured.

The blast occurred at around 9 a.m. CT near Quinton, Okla., about 235 km from Oklahoma City.

The U.S. Occupational Safety and Health Administration, which investigates fatal workplace accidents, was closed on
Monday because of the federal government shutdown.

Boots & Coots, Halliburton's well control and prevention service, was called in to put out the fire. Staff from the
state's energy regulator, Oklahoma Corporation Commission, were also on the scene, officials said.

The explosion is the latest in a series of accidents at oil and gas fields in the state. A gas explosion occurred at a
Trinity Resources well in the same area in February 2017, injuring a worker.

More recently, a 40-year-old Oklahoma man was killed in a backhoe accident this month at an oilfield near Ninnekah. A
worker was killed last month when equipment collapsed at a site near Preston, and a 36-year-old man was killed in November when a fitting failed during fracking at a well near Watonga, according to media reports.

Accidents during oil and gas drilling claim about 100 lives a year in the United States, according to the U.S. Centers for
Disease Control (CDC). Using data from the Bureau of Labor Statistics, the CDC reported 1,189 workers were killed in the 11 years ended 2013, a period of intensive drilling.

Two-thirds of the fatalities involved transportation or contact with objects or equipment, the CDC found. More than 50
percent involved employees of oilfield service companies.