U.S. President Barack Obama announces that 33,000 U.S. troops will be out of Afghanistan by next summer, saying progress is being made in the region but huge challenges remain. 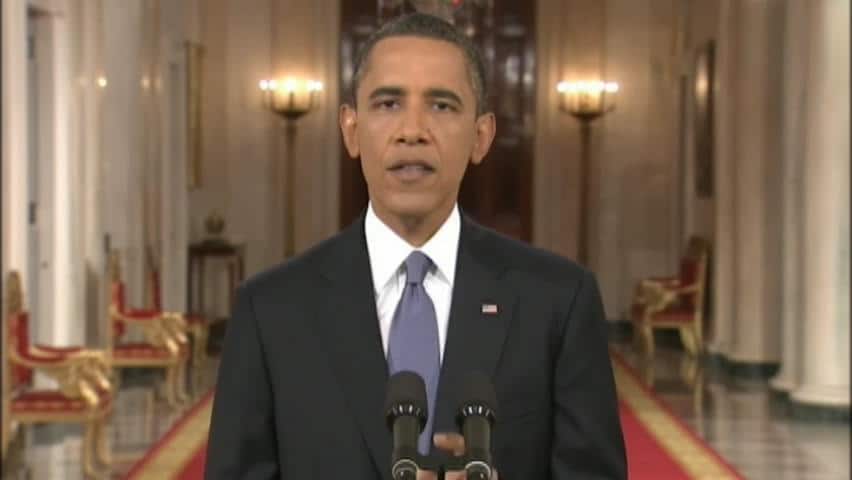 U.S. President Barack Obama announced Wednesday that 33,000 U.S. troops will be out of Afghanistan by next summer, saying progress is being made in the region but huge challenges remain.

"Thanks to our men and women in uniform, our civilian personnel, and our many coalition partners, we are meeting our goals," Obama said in a broadcast address.

"As a result, starting next month, we will be able to remove 10,000 of our troops from Afghanistan by the end of this year, and we will bring home a total of 33,000 troops by next summer, fully recovering the surge I announced at West Point."

The so-called surge of forces came after Obama's announcement in December 2009 that he was sending an additional 30,000 troops, plus an additional 3,000 he authorized Defence Secretary Robert Gates to employ to support the effort.

Obama said that after the initial reduction, troops will continue coming home at a steady pace as Afghan forces take more responsibility for security.

"By 2014, this process of transition will be complete, and the Afghan people will be responsible for their own security," he said.

Obama said the drawdown comes "from a position of strength" but he cautioned that "huge challenges remain."

"This is the beginning, but not the end, of our effort to wind down this war. We will have to do the hard work of keeping the gains that we have made, while we draw down our forces and transition responsibility for security to the Afghan government."

After the withdrawal, about 70,000 U.S. troops will remain in the country.

The military had lobbied for a more modest troop reduction and Obama promised a significant one as support for the war by the country and Congress faded.

But Obama has been under political pressure to bring U.S. troops home, with some Republican leaders suggesting it's time to accelerate the drawdown.

His announcement also comes after U.S. forces found and killed al-Qaeda leader Osama bin Laden in Pakistan in May.

The financial cost of the war has passed $440 billion and is on the rise, given the heavy troop commitment, jumping to $120 billion a year, or twice the total of two years ago.

Those costs have risen in importance as a divided U.S. government struggles to cut its budget deficits.