U.S. President Barack Obama challenged Cuba's communist government with an impassioned call for democratic and economic change on Tuesday, addressing the Cuban people directly in a historic speech broadcast throughout the island.

'Voters should be able to choose their governments' 5 years agoVideo
5:30
'I have come here to bury the last remnant of the Cold War in the Americas,' he says in first live speech by a sitting U.S. president to the Cuban people 5:30

U.S. President Barack Obama challenged Cuba's communist government with an impassioned call for democratic and economic change on Tuesday, addressing the Cuban people directly in a historic speech broadcast throughout the island.

Taking the stage at Havana's Grand Theatre with Cuban President Raul Castro in attendance, Obama used the crowning moment of his visit to extend a "hand of friendship." He came, he said, to "bury the last remnant" of the Cold War in the Americas.

But Obama also pressed hard for economic and political reforms and greater openness, speaking in a one-party state where little dissent is tolerated.

His speech was the high point of a trip made possible by his agreement with Castro in December 2014 to cast aside decades of hostility that began soon after Cuba's 1959 revolution, and work to normalize relations. Nonetheless, Obama minced no words in his calls for change.

'Citizens should be free to speak their minds'

"I believe citizens should be free to speak their minds without fear," Obama told the audience. "Voters should be able to choose their governments in free and democratic elections."

While he urged an end to the long-standing U.S. economic embargo on the island, Obama added that "even if we lifted the embargo tomorrow, Cubans would not realize their potential without continued change here in Cuba."

The scene of the leader of the United States, the superpower to the north once routinely reviled by the Cuban government, standing on Cuban soil urging such changes would have been unthinkable before the two countries began their rapprochement.

For years, Cuban leaders told American presidents to mind their own business. Indeed, Castro has been careful to state since the detente that it does not mean Cuba plans to change its political system, and that while his government is open to discuss any issue, it has to be with mutual respect.

Tuesday's audience of more than a 1,000 people was made up of invited guests of the U.S. and Cuban governments. They included officials and business people of both countries, visiting U.S. lawmakers and members of Cuba's cultural elite.

Obama drew sustained applause when he reiterated his call for the U.S. Congress to lift the embargo, which he called "an outdated burden on the Cuban people."

But the response was more muted to his appeal for greater political liberties, including freedom of expression and religion. Obama followed up those comments afterward with a private meeting with dissidents.

Obama received a smattering of applause, however, when he called for economic reform to help attract more investment from U.S. companies, many of which have remained wary.

At the same time, Obama sought to balance his critique with recognition of America's flaws and of Cuba's achievements in areas such as health care and education.

Obama, who abandoned a longtime U.S. policy of trying to isolate Cuba, wants to make his shift irreversible by the time he leaves office in January and secure it as a piece of his foreign policy legacy.

But major obstacles remain to full normalization of ties, most notably the continuing U.S. embargo and differences over human rights. The Republican-controlled Congress has so far rejected the Democratic president's call for a lifting of the embargo, although Obama has used his executive powers to ease some trade and travel restrictions on the island.

The president's critics at home have called his visit a premature reward to the Castro government. U.S. House of Representatives Speaker Paul Ryan, a Republican, said on Tuesday the trip legitimizes what he called Castro's "tyrannical dictatorship."

With his words carried live by Cuba's state-run media, Obama sought to persuade ordinary Cubans that his new policy, including easing of trade and travel restrictions, was focused primarily on helping them to improve their lives.

Standing at a lectern flanked by U.S. and Cuban flags, Obama laid out a hopeful vision of future U.S.-Cuban relations and told Cubans "it's up to you" to take steps to change the country.

Some Cubans who listened to Obama's speech broadcast to their homes and cafes took Obama's criticism of the Cuban system in stride and were also impressed by his frank admission of U.S. failings.

"He has been very honest in his statements," said Santiago Rodriguez, 78, in his home in central Havana.

"It is not only the blockade [embargo] that has overwhelmed [us] for years. This was a message full of suggestions and positive criticism for the future of Cuba."

Castro, an army general who took over as president from his ailing brother, Fidel Castro, in 2008, was at the theatre to greet Obama on arrival and sat in the audience for the speech. At the end, the Cuban leader lightly applauded from the balcony, then waved to the crowd.

At a news conference on Monday after they met for talks, Obama and Castro aired some of the old grievances between their countries, even as they sought to advance the diplomatic thaw. 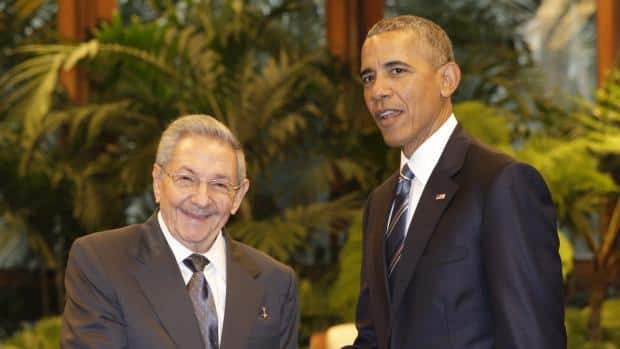 Obama's administration is seeking to bridge the ideological divide by galvanizing the support of the Cuban public to help him pressure their government for reforms to the one-party system and state-run economy that so far have been slow to come. But it runs the risk of being accused of meddling by Havana.

After the speech, Obama met privately with about a dozen Cuban dissidents at the U.S. Embassy. He noted that some of them had been detained and commended them for their courage. Among the participants was Berta Soler, leader of Ladies in White, a protest group.

Obama's much-anticipated address marked the first time a sitting U.S. president's speech was broadcast to the Cuban people while on Cuban soil — though speeches by visiting popes have been carried live by state media.

Jimmy Carter, travelling to Cuba in 2002 as the first former U.S. president to visit since the revolution, called for political freedoms in a speech broadcast on live television.