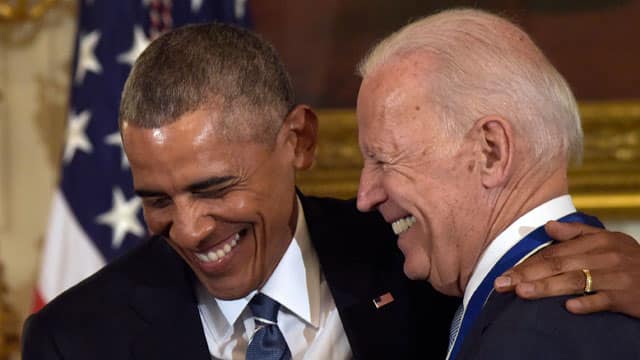 Obama jokes about 'bromance' with Biden

A teary-eyed Biden accepted the Presidential Medal of Freedom at a ceremony at the White House dedicated to honouring the outgoing vice-president.

"I had no idea," Biden said of the award, insisting he didn't deserve it.

It was the only time Obama has presented the medal "with distinction," also awarded only once by each of the previous three presidents.

Obama said he is bestowing the honour on Biden for "faith in your fellow Americans, for your love of country and a lifetime of service that will endure through the generations."

Biden praised his wife and children for their support throughout his career, and praised the Obama family for their dedication to country and service

I was part of the journey of a remarkable man who did remarkable things.- Joe Biden , U.S. vice-president

"I just hope that the asterisk in history that is attached to my
name when they talk about this presidency is that I can say I was
part of the journey of a remarkable man who did remarkable things
for this country," Biden said.

His folksy demeanour lent itself to plenty of jokes and caricatures, like the series of photos of Biden eating ice cream that exploded on social media. But Obama seemed fonder of the internet meme based on photos of him and Biden buddying it up.

Speaking ahead of Biden, Obama said the tribute "gives the internet one last chance to talk about our bromance."

He called Biden the "best possible choice, not just for me, but for the American people." 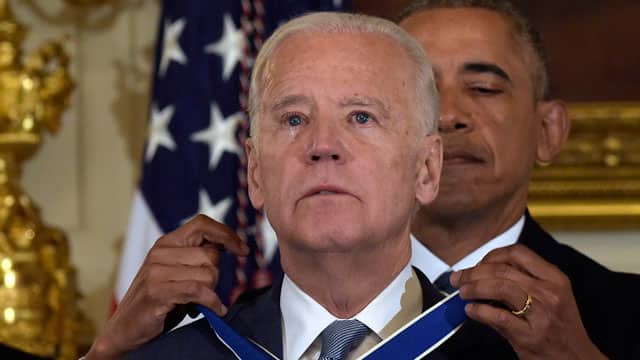 Biden thanks Obama for being a 'lone wolf'

4 years agoVideo
1:33
Vice-President Biden says receiving the Medal of Freedom is a reflection of President Obama's generosity of spirit 1:33

Obama commended the "Biden heart," listing the influences in Biden's life, from the nuns who taught him in grade school, to his Senate colleagues, to his parents.

Obama said there had been "no turf wars between our staffs," a departure from other recent administrations. And Biden told the story of how after his son Beau Biden died in 2015, leaving behind a wife and children, Obama was distraught when Biden said he might sell his house to help support them, and offered to give them money instead.

It was a reunion for the many staffers and colleagues who worked with Biden over the years. Joining Biden's wife, sister and children in the State Dining Room were former Sens. Chris Dodd and Ted Kaufman, former chief of staff Bruce Reed, and even Biden's White House physician.

Obama traced the history of Biden's nearly half-century-long political career, from chairing the Senate Judiciary and Foreign Relations committees to the "cancer moonshot" effort he started recently and plans to continue. Obama praised his vice-president for his work on the economic stimulus, middle-class issues and curbing violence against women.

Biden's career in Washington started in 1972 steeped in tragedy when his wife and infant daughter died in a car crash just before he was to be sworn in as U.S. senator.

After exiting the national stage next week, Biden plans to stay active in Democratic politics and work on policy issues at a pair of institutes he's developing at the University of Delaware and the University of Pennsylvania.