French President Emmanuel Macron has promised to rebuild fire-ravaged Notre-Dame Cathedral and says he is seeking international help to restore the Paris landmark. "Notre-Dame is burning, and I know the sadness, and this tremor felt by so many fellow French people. But tonight, I'd  like to speak of hope, too," he said. 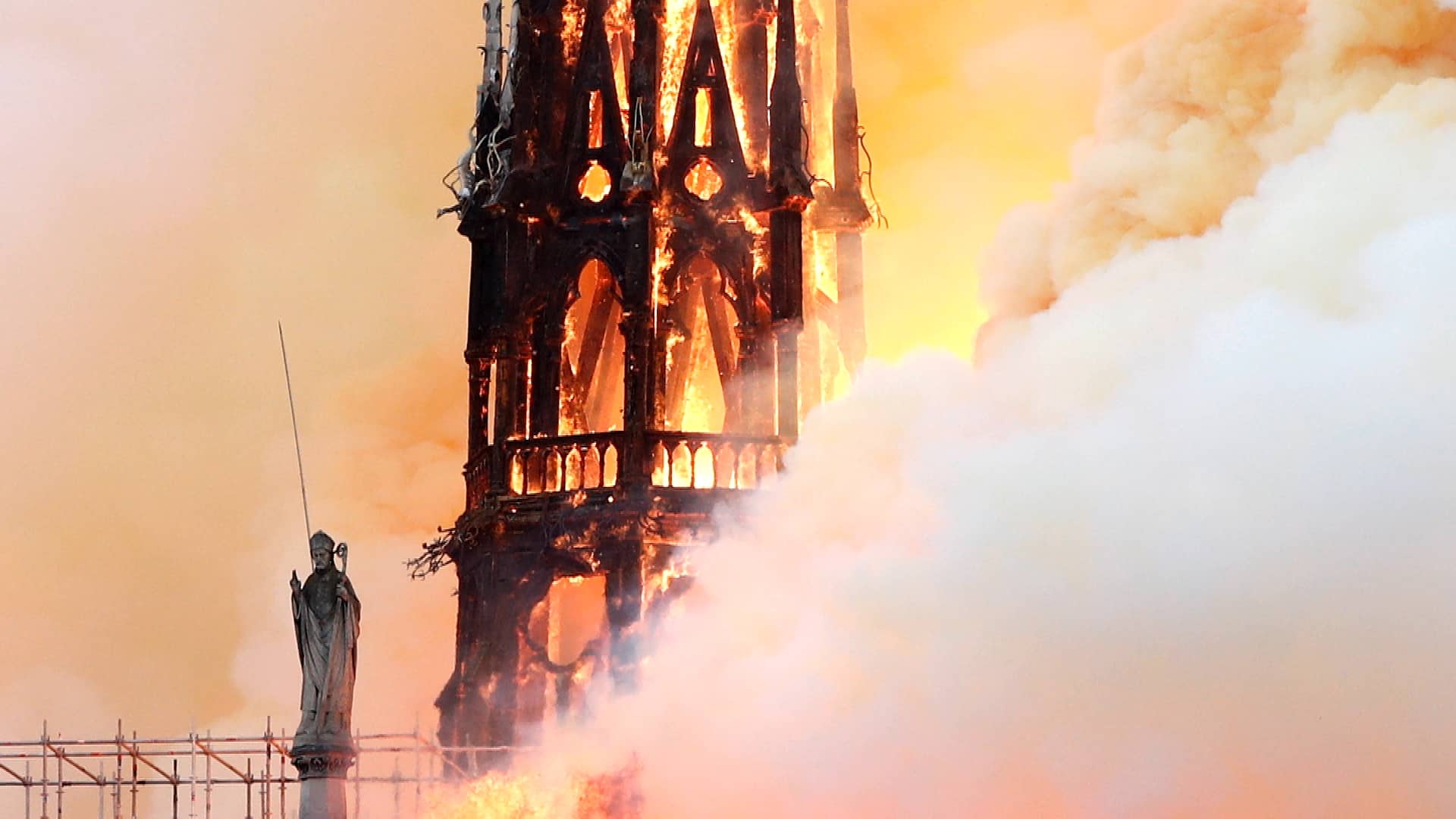 2 years ago
2:27
A massive fire has engulfed the Notre-Dame Cathedral, one of France's most visited sites, destroying the landmark's roof and famed spire. 2:27

French President Emmanuel Macron has promised to rebuild fire-ravaged Notre-Dame Cathedral and says he is seeking international help to restore the Paris landmark.

"Notre-Dame is burning, and I know the sadness, and this tremor felt by so many fellow French people. But tonight, I'd  like to speak of hope, too," he said, announcing the launch of a fundraising campaign.

The cathedral went up in flames on Monday in a roaring blaze that devastated the cathedral, causing a huge loss for the city and for France.

Flames that began in the early evening burst rapidly through the roof of the centuries-old structure and engulfed the spire, which collapsed, quickly followed by the entire roof.

As a huge plume of smoke wafted across the city and ash fell over a large area, Parisians watched, many of them at a loss for words.

Paris fire commander Jean-Claude Gallet said hundreds of firefighters stopped the flames from spreading to the north tower belfry and the cathedral's main structure has been saved from complete destruction.

After his announcement, response changed into a monitoring and mop-up operation, Macron said. "The worst has been avoided although the battle is not yet totally won," he said.

Macron said a national fundraising campaign to restore Notre-Dame would be launched Tuesday and he called on the world's "greatest talents" to help.

"Let's be proud, because we built this cathedral more than 800 years ago. We've built it and, throughout the centuries, let it grow and improved it, so I solemnly say tonight: we will rebuild it together," he said.

The French leader credited the "courage" and "great professionalism" of firefighters with sparing Notre-Dame's facade and two landmark towers from being destroyed.

However, Gallet said two-thirds of Notre-Dame's roofing "has been ravaged." One firefighter was injured, he said.

Gallet said fire crews will keep working overnight to cool down the structure.

Junior Interior Minister Laurent Nunez said late Monday that authorities remain "prudent" but are "much more optimistic" than earlier in the night.

The mayor of Paris said the neighbourhood closest to Notre-Dame Cathedral has been evacuated.

Mayor Anne Hidalgo said the significant collection of art work and holy objects kept inside the church has been recovered.

Fire treated as an accident

The Paris prosecutor's office said investigators are treating the blaze as an accident for now. They have ruled out arson or possible terror-related motives for starting the blaze.

The cathedral had been in the midst of renovations, with some sections under scaffolding. Bronze statues were removed last week for work.

"Like all our compatriots, I am sad this evening to see this part of all of us burn," the French president tweeted.

Macron, who cancelled an address to the nation that he had been due to give on Monday evening, went to the scene of the blaze.

'It will never be the same'

The cathedral, which dates back to the 12th century, features in Victor Hugo's classic novel The Hunchback of Notre-Dame. It is a UNESCO World Heritage site that attracts millions of tourists every year.

"I have a lot of friends who live abroad, and every time they come I tell them to go to Notre-Dame," said witness Samantha Silva, with tears in her eyes.

"I've visited it so many times, but it will never be the same. It's a real symbol of Paris."

Built over a century, starting in 1163, Notre-Dame is considered to be among the finest examples of French Gothic cathedral architecture.

"Notre-Dame is our history, our literature, part of our psyche, the place of all our great events, our epidemics, our wars, our liberations, the epicentre of our lives," Macron told reporters in front of the still-burning Paris landmark.

It is renowned for its rib vaulting, flying buttresses and stunning stained glass windows, as well as its many carved stone gargoyles.

Its 100-metre-long roof, of which a large section was consumed in the first hour of the blaze, was one of the oldest such structures in Paris, according to the cathedral's website.

"There are a lot of art works inside … it's a real tragedy," Mayor Hidalgo told reporters at the scene.

A centre of Roman Catholic faith, over the centuries Notre-Dame has also been a target of political upheaval.

It was ransacked by rioting Protestant Huguenots in the 16th century, pillaged again during the French Revolution of the 1790s, and left in a state of semi-neglect. Hugo's 1831 work led to revived interest in the cathedral and a major "partly botched" restoration that began in 1844.

The wood-and-lead spire was built during that restoration, according to the cathedral's website.

UNESCO said in a tweet it was "closely monitoring the situation and is standing by France's side to safeguard and restore this invaluable heritage."

With files from The Associated Press, CBC News