Notre-Dame to be closed as long as 6 years, Paris cathedral's rector says

Notre-Dame's rector says the Paris cathedral will be closed for five to six years, while the Paris prosecutor's office says investigators looking into the causes of the fire have still not been able to look inside the cathedral as it remains unsafe.

As the bells of France rang out from the nation's cathedrals and basilicas Wednesday, commemorating Monday's devastating fire, Notre-Dame's rector said the symbol of Paris will be closed for five to six years.

The Paris prosecutor's office said investigators looking into the causes of the fire have still not been able to look inside the cathedral as it remains unsafe.

Bishop Patrick Chauvet acknowledged that the famed monument would close down for "five to six years" as he spoke with local business owners two days after a blaze torched the roof of the cathedral and brought down its spire.

Chauvet said "a segment of the cathedral has been very weakened" by the devastating fire. He did not elaborate which section he was talking about.

He added it was unclear what the church's 67 employees would be doing in the future.

The cultural heritage envoy for French President Emmanuel Macron says it is realistic to reopen Notre-Dame Cathedral to the public in five years.

Following a meeting at the presidential palace about the cathedral's reconstruction, Stephane Bern said Macron's goal is to allow visitors coming for the 2024 Olympic Games in Paris to visit Notre-Dame. 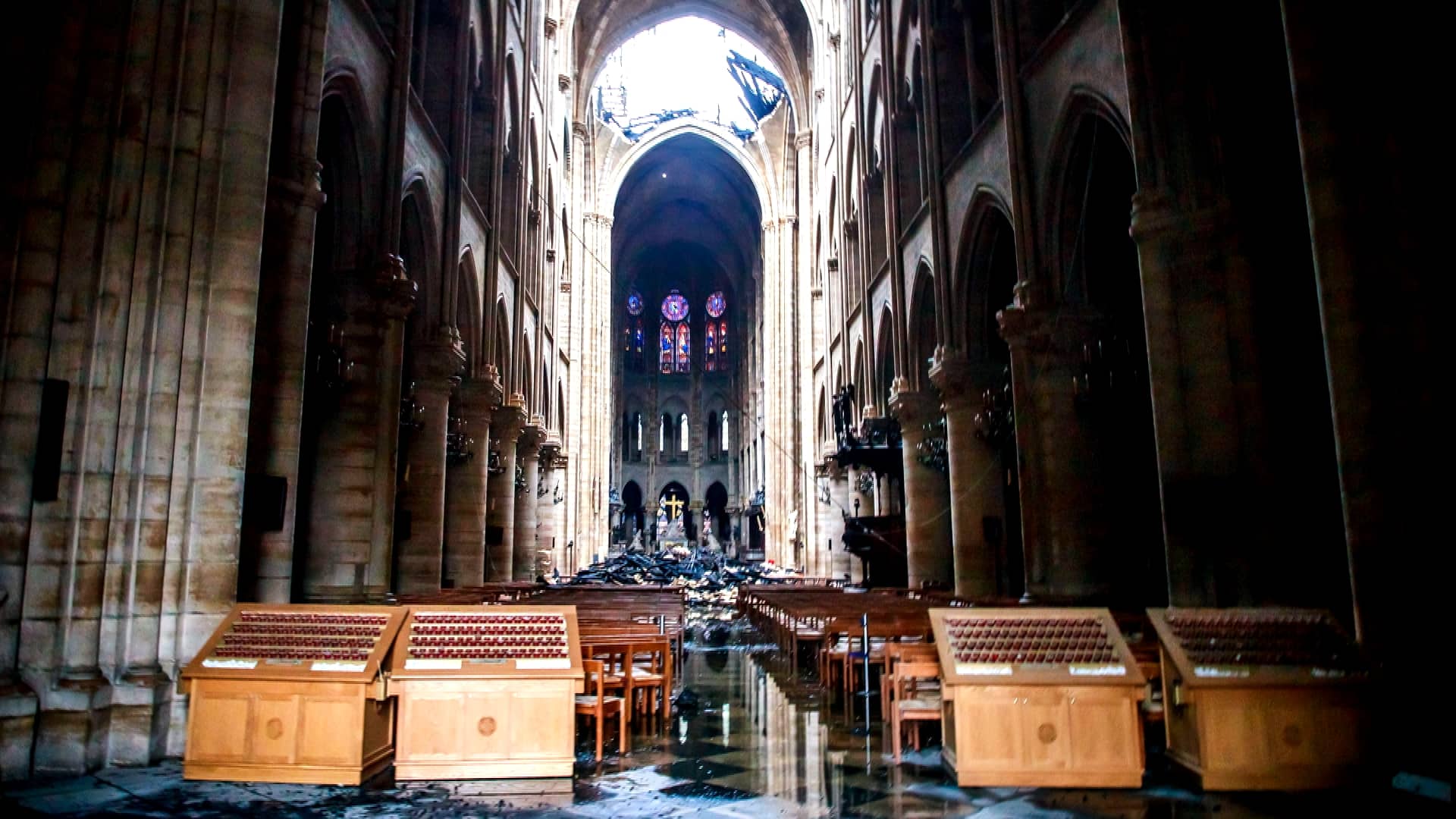 What was lost, recovered in Notre-Dame Cathedral fire

2 years agoVideo
4:16
Many religious artifacts were saved from Monday's fire, but uncertainty remains over how much irreplaceable history was damaged or destroyed. 4:16

"No one around the table has protested saying this is unrealistic or utopian," Bern said.

A Paris official said part of the support structure around the cathedral's rose windows is to be dismantled to prevent further damage.

The culture ministry's fire expert, Jose Vaz de Matos, told reporters that part of the triangular structure above the central rose window is to be taken down "to limit the movement" of the stone.

De Matos said the main risk to the cathedral is the gables above the rose windows, which provide crucial support to the stained glass masterpieces.

He said the structure is particularly exposed to the wind, and the overall structure remains fragile. Police officials told The Associated Press that the triangular structure is leaning 20 centimetres forward toward the street since the fire.

"We still have the main parts of the building so hopefully we will celebrate again in this cathedral," Ambroise Laurent, the deputy secretary-general of the Conference of French Bishops, told CBC's Thomas Daigle.

"It will take some more time to evaluate what we need to do to adjust here in Paris in order to celebrate elsewhere."

Paris firefighters spokesperson Gabriel Plus told reporters that the cathedral's rose windows are "in good condition," but "there is a risk for the gables that are no longer supported by the frame."

He said firefighters took down statues inside the gables above the rose windows to protect them, and took care not to spray water too hard on the delicate stained glass.

He said firefighters and experts are still closely monitoring the building to determine how much damage the structure suffered and what needs to be dismantled to avoid collapse.

Investigators will continue with interviews Wednesday, saying the inquiry will go on until prosecutors uncover "the truth and identify the origin" of the blaze. On Tuesday, investigators spoke with around 30 witnesses, including employees of companies involved in the church's restoration and security personnel.

Philippe said the competition aims at "giving Notre-Dame a spire adapted to technologies and challenges of our times."

"This is obviously a huge challenge, a historic responsibility," he said.

Pinault pledged €100 million (a little over $150 million Cdn) as the blaze was still raging — a decision dictated by emotion, a spokesperson for his family's holding company said.

Hours later, his great rival Bernard Arnault, France's richest man and the head of Louis Vuitton owner LVMH, announced he was donating €200 million (just over $300 million Cdn), moved by the alarming pictures on TV, according to a group spokesperson.

The Bettencourt-Meyer family, the largest shareholder in L'Oreal, followed suit a while later, pledging a combined €200 million alongside the global cosmetics group.

See what was lost and recovered in Monday's Notre-Dame fire:

The Walt Disney Co. has pledged to contribute $5 million US to aid in the reconstruction of the Notre Dame Cathedral after Monday's fire.

The cathedral was the setting for Disney's 1996 animated adaptation of Victor Hugo's The Hunchback of Notre-Dame. Disney is also developing a live-action adaptation.

Philippe said authorities have no estimate yet of the total cost of the renovation work. Macron said Tuesday he wants the cathedral to be rebuilt in five years; tycoons and international firms have promised financial and expert help.

A Paris fire official said the towers would have fallen if firefighters hadn't deployed massive equipment and acted swiftly.

Philippe Demay denied there was any delay and said firefighters acted as fast as they could. He told reporters that the operation was extremely difficult and that the towers could have collapsed "if we hadn't put heavy equipment in place."

Notre-Dame de Paris was built over a period of nearly 200 years, starting in the middle of the 12th century, though it was only in the mid-1800s that architect Eugène Viollet-le-Duc added the lead-covered spire during restoration work.

"The international competition will allow us to ask the question of whether we should even recreate the spire as it was conceived by Viollet-le-Duc," Philippe told reporters.

"Or if, as is often the case in the evolution of heritage, we should endow Notre-Dame with a new spire."

As he spoke, firefighters were using a crane to hoist supports to stabilize a fire-ravaged pinnacle that houses one of the cathedral's historic rose stained-glass windows.

There was no immediate danger that the centuries-old structure would collapse but statues were also being removed to reduce the risk of movement now that it was no longer supported by the oak-framed roof, the fire service's spokesperson said.

'No one is talking about us'

Paris merchants whose livelihoods depend on Notre-Dame tourism are worried about the cathedral's stability and their own futures.

The island that houses the cathedral has been closed to the public since Monday's fire, which led to nearby homes being evacuated. It's literally the nucleus of Paris — all distances in France are measured from the esplanade in front of Notre-Dame.

It's also one of the most-visited spots in France, whose economy depends heavily on tourism.

Patrick Lejeune, president of the Notre-Dame neighbourhood merchants association, told The Associated Press that the group's 150 employees fear for the future.

"No one is talking about us," he said. Bustling streets are now "totally closed. I don't have access to my office."

He also expressed concern for the stability of the cathedral and its central rose window. Its spire collapsed and the roof was destroyed in the fire.

With files from CBC's Thomas Daigle and Reuters