A year on from the inferno that gutted Notre-Dame de Paris, the cathedral's great bell rang out across the capital on Wednesday in a tribute to the Gothic landmark's resilience and to the medics battling the COVID-19 pandemic.

Restoration of Gothic cathedral 'a symbol of the resilience of our people,' Macron says 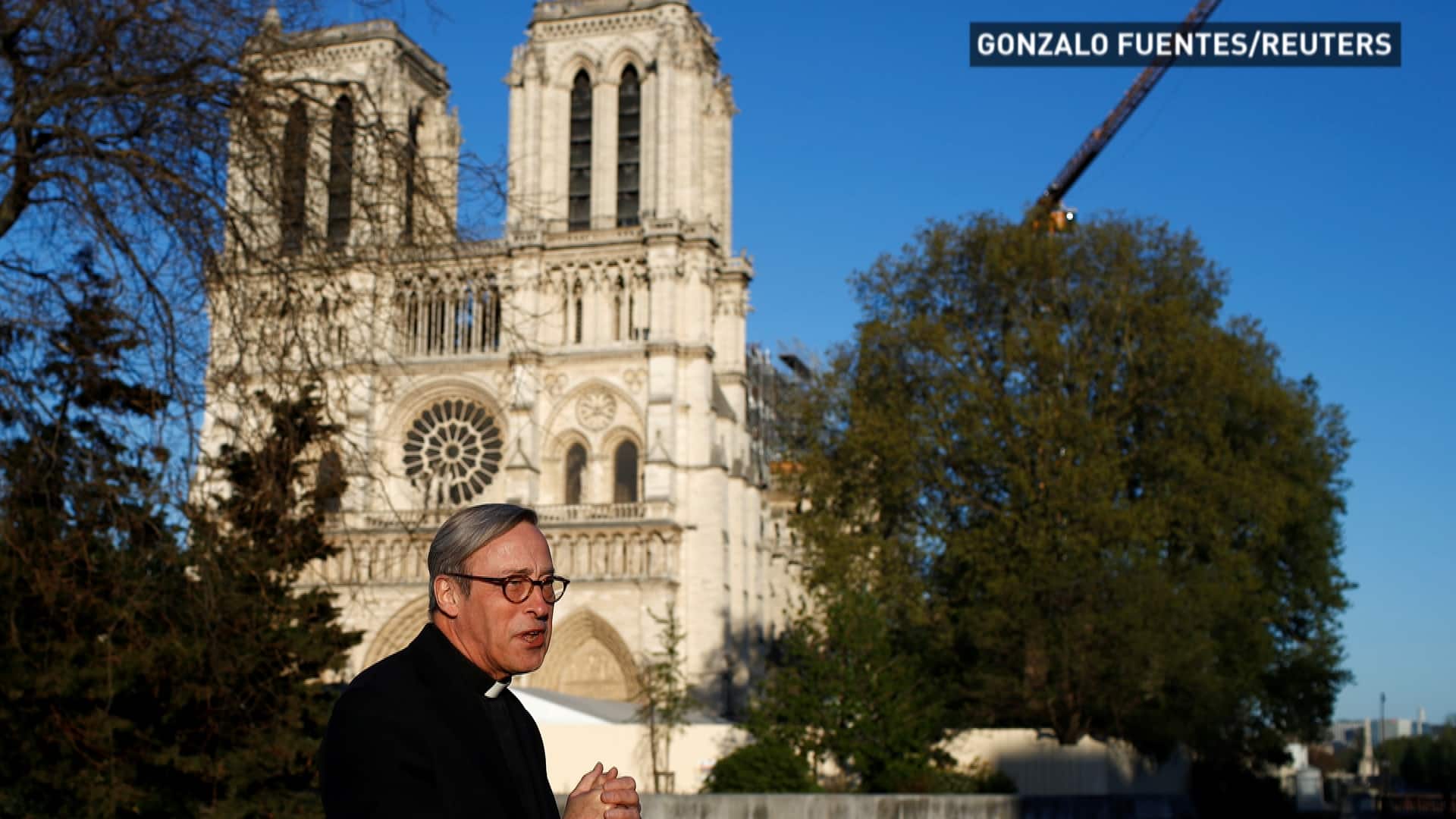 Bell rings out in Notre-Dame cathedral in Paris

A year on from the inferno that gutted Notre-Dame de Paris, the cathedral's great bell rang out across the capital on Wednesday in a tribute to the Gothic landmark's resilience and to the medics battling the COVID-19 pandemic.

The bourdon bell had sounded just once since April 15, 2019, when the blaze broke out that consumed the spire and the roof and, officials say, came within 30 minutes of razing the 850-year-old cathedral.

Three people wearing hazmat suits and masks to shield themselves from the huge quantities of toxic lead dispersed during the fire took turns to heave on a rope high in the southern belfry to swing the bell's clapper for five minutes.

The bourdon sounded at 8 p.m. local time, just as Parisians came out onto their balconies and leaned out of windows to applaud the front-line medics and health care providers risking their lives to treat COVID-19 patients.

The outbreak has killed more than 17,000 people in France.

"The restoration of Notre-Dame ... is a symbol of the resilience of our people, of their capacity to overcome hardships, and to recover," President Emmanuel Macron said.

Twelve months ago, Parisians lined the banks of the River Seine, some holding hands, others singing hymns and lighting candles as the fire ravaged a centuries-old symbol of French identity.

Pope Francis at the time spoke of the sadness he felt for the French people mourning the devastation of Notre-Dame. One such person was local artist Frederique Galey-Jacob who on Wednesday returned to the cathedral to sketch the scene.

"It allowed me to express my feelings, to fight against the feeling of powerlessness that we felt as it burned," Galey-Jacob said. "It's a need, I don't know how to explain it."

As the bourdon stopped tolling, cheering erupted from surrounding streets.

Macron reiterated a promise to rebuild Notre-Dame within five years, though the works to ensure the cathedral is structurally sound are running months behind schedule, delayed first by winter storms and now by the pandemic.

"Our objective is to prepare the cathedral for mass on April 16, 2024," Jean-Louis Georgelin, the retired army general leading the restoration project, told Reuters.

"Of course, that doesn't mean everything will be finished."

But the cathedral's southern belfry where the 13-tonne bell — cast in 1681 and the second biggest in France — is housed, is structurally undamaged.

It is traditionally rung for major religious celebrations, papal visits and presidential funerals, and has sounded once since the fire — in September 2019 in tribute to former President Jacques Chirac, who died that month.