The United States plans to impose additional sanctions against North Korea soon, a White House spokesperson says after Pyongyang said it had it successfully tested a new intercontinental ballistic missile (ICBM) and could now reach the U.S. mainland with its nuclear weapons.

The United States plans to impose additional sanctions against North Korea soon, a White House spokesperson said Wednesday after Pyongyang said it had it successfully tested a new intercontinental ballistic missile (ICBM) and could now reach the U.S. mainland with its nuclear weapons.

Sanders also said the Trump administration would also "try to push Russia to take a bigger and bolder stance to put more pressure on North Korea."

Her comments come after U.S. President Donald Trump tweeted on Wednesday that new sanctions would be imposed on North Korea.

"Just spoke to President Xi Jinping of China concerning the provocative actions of North Korea. Additional major sanctions will be imposed on North Korea today. This situation will be handled!" Trump said on Twitter. He gave no other details about the type of sanctions being considered.

North Korea said it successfully tested the new missile on Wednesday in a "breakthrough" that puts the U.S. mainland within range of its nuclear weapons whose warheads could withstand re-entry to the Earth's atmosphere.

North Korea's first since mid-September came a week after Trump put North Korea back on a U.S. list of countries it says support terrorism, allowing it to impose more sanctions.

North Korea, which also conducted its sixth and largest nuclear test in September, has tested dozens of ballistic missiles under leader Kim Jong-un in defiance of international sanctions. The latest was the highest and longest any North Korean missile had flown, landing in the sea near Japan.

North Korea said the new powerful missile reached an altitude of around 4,475 kilometres — more than 10 times the height of the international space station — and flew 950 km during its 53-minute flight.

"After watching the successful launch of the new type ICBM Hwasong-15, Kim Jong-un declared with pride that now we have finally realized the great historic cause of completing the state nuclear force, the cause of building a rocket power," according to a statement read by a television presenter. 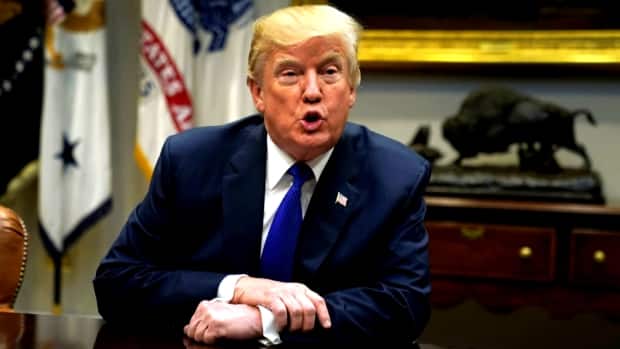 State media said the missile was launched from a newly developed vehicle.

State media said Kim personally guided the missile test and that the new launcher was "impeccable." He reportedly described the new vehicle as a "breakthrough."

In the statement, North Korea described itself as a "responsible nuclear power," saying its strategic weapons were developed to defend itself from "the U.S. imperialists' nuclear blackmail policy and nuclear threat."

The UN Security Council was scheduled to meet on Wednesday to discuss the launch.

Many nuclear experts say the North has yet to prove it has mastered all technical hurdles including the ability to deliver a nuclear warhead reliably atop an ICBM, but likely soon will.

"We don't have to like it, but we're going to have to learn to live with North Korea's ability to target the United States with nuclear weapons," said Jeffrey Lewis, head of the East Asia Nonproliferation Program at the Middlebury Institute of Strategic Studies.

'Threaten everywhere in the world'

U.S., Japanese and South Korean officials all agreed the missile, which landed within Japan's exclusive economic zone, was likely an ICBM. It did not pose a threat to the United States, its territories or allies, the Pentagon said.

"It went higher frankly than any previous shot they've taken, a research and development effort on their part to continue building ballistic missiles that can threaten everywhere in the world, basically," U.S. Defence Secretary Jim Mattis told reporters at the White House.

"It is a situation that we will handle," Trump told reporters.

Trump, who was briefed on the missile while it was in flight, said it did not change his administration's approach to North Korea, which has included new curbs to hurt trade between China and North Korea.

Washington has said repeatedly that all options, including military ones, are on the table in dealing with North Korea. 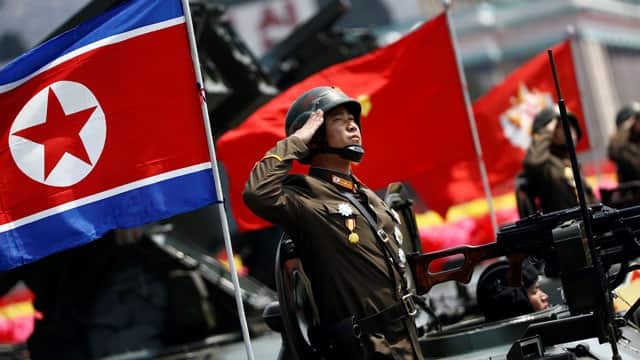 3 years agoVideo
2:10
U.S. President Donald Trump has designated North Korea as a sponsor of terrorism and is promising tougher sanctions over the development of nuclear weapons. North Korea joins Iran, Sudan and Syra on America's terror blacklist; Canada's list consists only of Iran and Syria 2:10

Other than carrying out existing UN sanctions, "the international community must take additional measures to enhance maritime security, including the right to interdict maritime traffic" travelling to North Korea, Tillerson said in a statement.

"This is a clear violation of Security Council resolutions and shows complete disregard for the united view of the international community," his spokesperson said in a statement.

China, North Korea's lone major ally, expressed "grave concern" at the test, while calling for all sides to act cautiously.

The new Hwasong-15, named after the planet Mars, was a more advanced version of the Hwasong-14 ICBM tested twice in July, North Korea said.

It was designed to carry a "super-large heavy warhead" and had much greater advantages in its tactical and technological specifications than its predecessor.

Based on its trajectory and distance, the missile would have a range of more than 13,000 km — more than enough to reach Washington D.C., the U.S.-based Union of Concerned Scientists said.

However, it was unclear how heavy a payload the missile was carrying, and it was uncertain if it could carry a large nuclear warhead that far, the nonprofit science advocacy group added.

'Could get out of control' 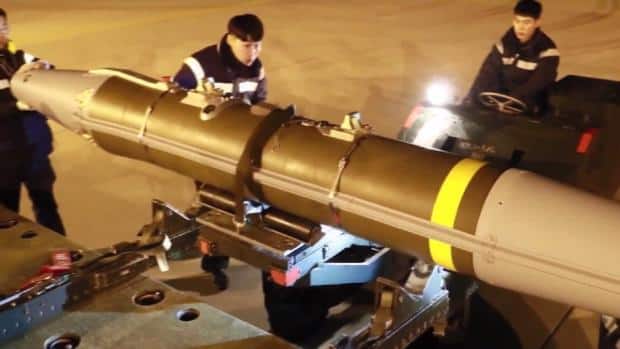 South Korea's Moon said the launch had been anticipated and the government had been preparing for it. There was no choice but for countries to keep applying pressure and sanctions against North Korea, he added.

"The situation could get out of control if North Korea perfects its ICBM technology," Moon said, according to the Blue House after a national security council meeting.

"North Korea shouldn't miscalculate the situation and threaten South Korea with a nuclear weapon, which could elicit a possible pre-emptive strike by the United States."

The test comes less than three months before South Korea hosts the Winter Olympics at a resort just 80 kilometres from the heavily fortified border with the North.

North Korea has said its weapons programs are a necessary defence against U.S. plans to invade.

Last week, North Korea denounced Trump's decision to relist it as a state sponsor of terrorism, calling it a "serious provocation and violent infringement."

A U.S. government source said the U.S. assessment was the launch was the latest in a serious series of tests to develop and perfect North Korea missile systems rather than any response to Trump.

Trump has traded insults and threats with Kim and warned in September that the United States would have no choice but to "totally destroy" North Korea if forced to defend itself or its allies.

Minister of Foreign Affairs Chrystia Freeland released a statement condemning the attacks while offering support for "Japan, South Korea, and other partners in the region."

Freeland's statement also included a desire for using diplomacy to handle the situation.

"Today, Canada is announcing that it will soon convene a meeting of foreign ministers in Canada, co-hosted with the United States, to address this most pressing international security threat. A specific date and location for this meeting will be announced in due course."

Mark Field, minister for Asia and the Pacific, said in a statement he called the meeting to "make clear to him our condemnation of this latest ballistic missile test."

"North Korea claims it wants to bring security and prosperity to its people. But its actions are creating only insecurity and deepening its isolation," said Field.

The latest test is a provocative act, Russia said on Wednesday, calling on all sides involved to stay calm to avoid a clash.

"Certainly, this new missile launch is a provocative act, which provokes further growth in tension and which moves us further away from the point where a settlement of the crisis can begin," Kremlin spokesman Dmitry Peskov said on a conference call with reporters.

Russia and China have proposed a roadmap for defusing the crisis in the region. On Wednesday, Russia's foreign ministry repeated its offer to use the plan, calling on North Korea to stop its missile and nuclear tests, while urging the United States and South Korea to abstain from their "unprecedentedly large-scale, unscheduled military air exercises announced to be held in early December."