Suspected Islamic militants struck in the heart of Nigeria on Monday with a massive rush-hour bomb blast at a bus station that killed at least 72 people and wounded 164 in the deadliest attack ever on the nation's capital. 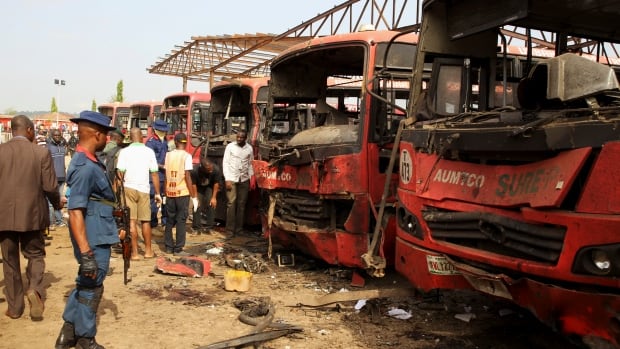 Suspected Islamic militants struck in the heart of Nigeria on Monday with a massive rush-hour bomb blast at a bus station that killed at least 72 people and wounded 164 in the deadliest attack ever on the nation's capital.

Survivors screamed in anguish and the stench of burning fuel and flesh hung over the area, where billows of black smoke rose as firefighters worked to put out the fires. Rescue workers and police gathered body parts as ambulances rushed the wounded to hospitals.

Authorities said at least 72 people were killed and 164 wounded, though the death toll was sure to climb because it did not include victims whose bodies were dismembered, the health ministry said. It was the deadliest attack yet in Abuja, the centrally located capital that is hundreds of miles from Boko Haram's stronghold in Nigeria's northeast.

"I can't count the number of people that died. They took them in open vehicles. People were running and there was confusion," said civil servant Ben Nwachukwu.

A counter-terrorism expert said the bomb appeared to have been buried underground, while the emergency management agency said the explosives were apparently hidden in a vehicle.

Bus driver Tunji Adeniran said he was about to leave the bus terminal when the explosion struck. "The bomb shattered my vehicle," he said. "One vehicle was in front of me. As he started his car, I heard a loud noise. I thought it was his car that exploded."

Adeniran said his brother, bank worker Mohammed Ochai, was fatally injured in the blast and died on the way to the hospital.

The explosion, which struck at 6:45 a.m. in the poor satellite neighbourhood of Nyanya, left a 1.2-metre-deep crater and destroyed 16 luxury buses and 24 minibuses and cars, police spokesman Frank Mba said.

Security personnel battled to cordon off the area as a bomb detonation team combed it for secondary explosives amid fiery blasts from exploding car tanks ignited by the blaze. Thousands of bystanders gathered, ignoring warnings to stay away.

While Jonathan blamed Boko Haram, there was no immediate claim of responsibility for the bombing, though bus stations are a favoured Boko Haram target. In March 2013, the extremists drove a car bomb into the main bus station in Kano, Nigeria's second-biggest city, killing at least 25 people.

Touring the blast site Monday, Jonathan tried to downplay the terrorist network's reach, saying, "the issue of Boko Haram is temporary. Surely, we will get over it."

"Such brutal acts of terror cannot be allowed to go unpunished," he said in a statement. "Canada reaffirms its support to Nigeria as it combats terrorism."

In Washington, U.S. State Department spokeswoman Jen Psaki said the Obama administration was "outraged by these senseless acts of violence against innocent civilians."

Canada's foreign affairs department issued an advisory warning Canadians against 'non-essential' travel to Nigeria. The advisory said the country is at a 'significant risk of terrorism, crime, inter-communal clashes, armed attacks and kidnappings.'

"We encourage the government of Nigeria to conduct a full investigation to identify and bring justice to the perpetrators of these attacks. We continue to stand with the Nigerian government and people as they grapple with violent extremism."

Interpol secretary general Ronald K. Noble offered to deploy a special response team to help investigate what he deplored as "this mass murder."

Boko Haram's campaign to make Nigeria an Islamic state poses the greatest threat to its cohesion and security and imperils nearby countries where its fighters have gone to train. Fighters from Chad, Cameroon and Niger have been found among extremists in Nigeria, whose 170 million people are divided almost equally between Muslims living mainly in the north and Christians in the south.

While the capital of Africa's most populous country had remained relatively peaceful even as Boko Haram attacks in northeast Nigeria have increased, there have been notable exceptions, including a 2011 car bombing of the local UN headquarters that killed 21 people and wounded 60.

Last week, Boko Haram suspects detained at the State Security Service headquarters in Abuja, next door to the presidential villa, staged a failed jailbreak in which it is suspected that they had outside help. The agency said 21 detainees were killed and two agents wounded in a shootout that lasted more than two hours.

In a warning emailed to U.S. citizens after Monday's blast, the U.S. State Department urged avoiding locations where large crowds gather such as churches, mosques and markets, as well as hotels and malls frequented by foreigners.