U.S. President Donald Trump suggested this week that "treason" best describes a crime he believes is being perpetrated by rogue White House staffers bent on foiling his presidential authority. Experts beg to differ.

Donald Trump grasped for a word this week to suggest that a serious crime — one that is punishable by death — is being perpetrated by rogue White House staffers bent on foiling his democratically bequeathed presidential authority.

The word he landed on was "treason."

Trump levelled the charge in an all-caps tweet after the New York Times published a bombshell op-ed by an anonymous "senior official," revealing that a "quiet resistance" within the Trump administration has been conspiring to undercut the president's "erratic" decision-making to protect the country's interests.

The actions are arguably disloyal. Maybe even undemocratic, given that the will of a legitimately elected commander-in-chief is being subverted in such a way. But to say it's treason?

"A ludicrously stupid thing to say," said Carlton Larson, the U.S.'s foremost scholar on treason law at the University of California, Davis.

"I can't imagine the Justice Department — even if they found out who this person was — would indict this person for treason."

An editorial and a tell-all book

In the Times editorial, which was published on Wednesday, the anonymous official writes that a group of "like-minded" staffers has committed to "thwarting Mr. Trump's more misguided impulses" for as long as he remains in office.

The editorial came a day after the Washington Post published details from a forthcoming book by veteran investigative journalist Bob Woodward, describing senior aides swiping documents off Trump's desk so he can't execute certain actions, and top brass instructing other underlings to dismiss some of the president's orders.

None of it sounds much like treason to Larson, who points back to Article Three of the U.S. Constitution. It narrowly interprets treason as raising war against the United States in an armed conflict to overthrow the government, he said.

Watch Trump address the editorial controversy at a rally on Thursday night in Montana. 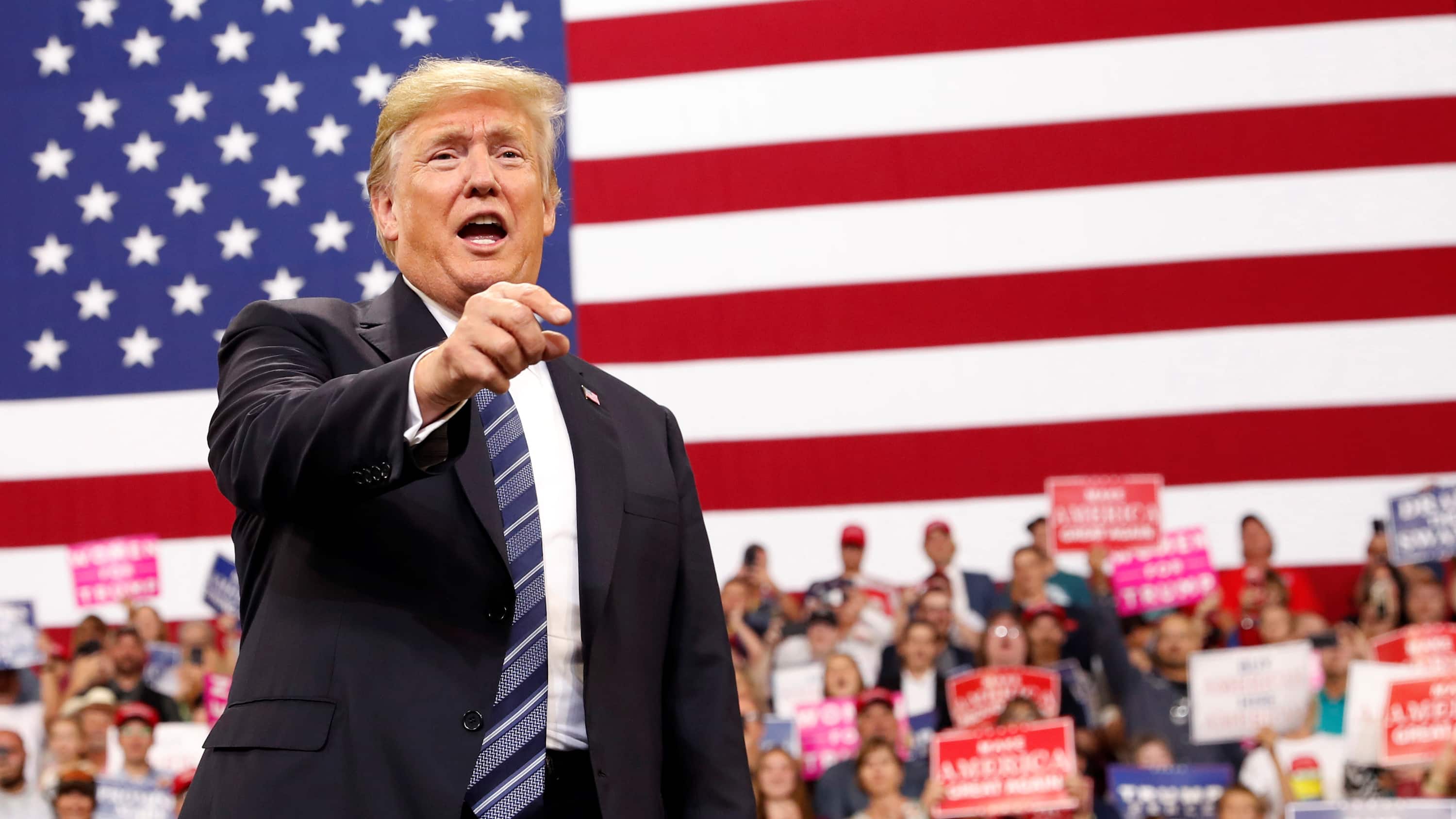 2 years ago
0:54
U.S. President Donald Trump demands the New York Times identify the author of a critical editorial it published. 0:54

Disobeying the president — even despite the American electorate legitimately putting him in office — doesn't quite cut it, Larson said.

"If you thought there was disloyalty here, there's certainly not any use of force. Even disloyalty to the United States is not necessarily treason," he said.

The treason clause in Article Three states: "Treason against the United States shall consist only in levying war against them, or in adhering to their enemies, giving them aid and comfort. No person shall be convicted of treason unless on the testimony of two witnesses to the same overt act, or on confession in open court."

If that sounds like a high bar to meet, Larson says that's because it is. Only a handful of U.S. treason cases have been successfully prosecuted during the postwar era, experts estimate.

(California-born Adam Gadahn, a spokesperson for al-Qaeda, was the first American to be indicted for the capital crime in 50 years when he was charged in 2004. But he was never caught and died in a 2015 counterterrorism operation in Pakistan.)

"An 'enemy' has to be some type of foreign group, nation, or group with whom the United States is at war. That's really limited," said Larson. "That's handing guns over to al-Qaeda, or the Taliban, or something."

Looking at cues from the past

American co-conspirators Julius and Ethel Rosenberg were executed by the federal government in 1953 for their work transmitting American secrets about nuclear weapons to the Soviet Union.

But not even the Rosenbergs were convicted of treason. Instead, they were found guilty of conspiracy to commit espionage "because we were not at war with the Soviet Union at the time," Larson said.

"Same thing if you spied for China. That wouldn't be treason against the United States," he said.

Larson uses the same rationale to dismiss liberal claims that Trump's deference to Russian Leader Vladimir Putin, and his reluctance to call out the Kremlin's meddling in the 2016 U.S. election, is treasonous.

"Russia is just not the enemy right now. All this Russia stuff — there's lots of other reasons to be upset about it. And I think some crimes are being committed," he said. "But that crime is not treason."

Accusing Trump of treason for kowtowing to Putin "is just as nonsensical" as slamming the op-ed author of committing treason, said Sanford Levinson, a constitutional law professor at the University of Texas.

"It doesn't work to criticize the president about those decisions you don't like as treason, rather than just stupid decisions, or decisions that are taking us over a cliff," he said.

According to the op-ed author, Trump's underlings are operating to rein him in, not as some faction of a so-called deep state, but rather as "the work of the steady state."

Some degree of bureaucratic pushback is to be expected in any presidential administration, Levinson says, though Trump's White House may be taking it to a new extreme.

"You can easily say that the op-ed manifested disloyalty. But that happens in any organization every single day when somebody doesn't like what the boss is doing and acts subtly to subvert it," Levinson says.

"You might toss around the word 'treason' in a conversational sense, but to a lawyer, that would make no sense."

Levinson says the situation reminds him of what Harry Truman said about Dwight (Ike) Eisenhower, a five-star general, succeeding him as commander-in-chief.

"He'll sit here and he'll say, 'Do this! Do that!' And nothing will happen. Poor Ike — it won't be like the army," Truman is quoted as saying in presidential scholar Richard Neustadt's Presidential Power and the Modern Presidents.

In his new tell-all book about the Trump administration, Woodward writes that Defence Secretary James Mattis fielded a call from Trump, ordering the military to "f—king kill" Syrian dictator Bashar al-Assad after a chemical attack in April 2017. Mattis, according to the book, told the president he would carry out the request, then hung up and told a senior aide: "We're not going to do any of that."

Outrageous as that may sound, it's analogous to the clandestine agreements that aides of a heavily medicated Richard Nixon made during his final months in office.

"As Nixon's presidency was coming to one end and he was feeling more trapped, he started to act more paranoid," recounted presidential historian Mike Purdy. "Cabinet secretaries and his aides were concerned about his drinking."

Nixon's secretary of defence, James Schlesinger, tried to run interference, instructing military brass to brief him about any unusual orders, such as a nuclear missile launch, from the commander-in-chief.

Without knowing the identity of the op-ed writer, it's hard to read into possible national security implications in the editorial, said Ned Price, a former spokesperson for the Central Intelligence Agency.

Price, too, views it as disloyalty to the president — but not treason.

"You have to keep in mind public servants in this country swear loyalty not to a party or a president, but to our Constitution," he said. "Perhaps you can make a case they're being loyal to the Constitution."

Price suspects the aim of the author was to "soften the image" of Trump administration officials, though he doesn't believe the writer deserves any plaudits for what reads to him as "self-aggrandizing" pageantry.

"We need to judge them by what this administration has done or is doing," he said. "Not what they're doing behind closed doors."