The release of an anonymous op-ed in the New York Times from a senior Trump administration official slamming the president has White House staffers, political pundits and journalists racing to try and uncover the writer's identity.

The release of an anonymous op-ed in the New York Times from a senior Trump administration official slamming the U.S. president has White House staffers, political pundits and journalists racing to try and uncover the writer's identity.

The op-ed — titled "I Am Part of the Resistance Inside the Trump Administration" — claims to be written by someone who, along with other "like-minded colleagues," has "vowed to thwart parts" of Donald Trump's agenda and "his worst inclinations."

White House aides have reportedly launched an internal search for the individual, adding to the search already underway for those who were sources for Washington Post journalist Bob Woodward's upcoming tell-all book, Fear: Trump in the White House.

Does the so-called “Senior Administration Official” really exist, or is it just the Failing New York Times with another phony source? If the GUTLESS anonymous person does indeed exist, the Times must, for National Security purposes, turn him/her over to government at once!

All that the Times will admit regarding the author's identity is that it is a "senior official in the Trump administration."

James Dao, the newspaper's op-ed editor, told the Times' podcast The Daily that the author contacted the paper through an intermediary.

Dao would not expand on the definition of "senior official" and said only a "very small number" of people at the New York Times knows the author's identity.

(The op-ed has also put the New York Times in a weird position of its reporters trying to uncover the identity of  someone known by other senior staff.)

The mystery writer has sparked wild speculation, similar to the frenzy to learn the identity of Woodward and Carl Bernstein's mysterious Watergate source, Deep Throat, who was later to be revealed to be FBI associate director Mark Felt.

Trump himself, according to the Post, thinks the anonymous official works on national security issues or in the Justice Department.

Social media has been flooded with theories and counter-theories as to the author's identity, with speculation ranging from Vice-President Mike Pence, Attorney General Jeff Sessions and White House counsellor Kellyanne Conway, to Trump's own daughter, Ivanka, or his wife, Melania.

Political observers have become amateur forensic linguists, as they pore over any possible stylistic clues in the piece that might give away the author's identity.

As Newsweek suggested, the senior official references "we" in the context of "Trump appointees," suggesting the author could be a cabinet member.

Many have zeroed in on one particular word — lodestar — used in the op-ed to praise the late Sen. John McCain. That word, say some of these new amateur sleuths, is one often used in speeches given by Pence, meaning it could be either the vice-president or possibly his speechwriter.

"The fact that Pence has been using the word a ton going back to his radio show suggests it’s him. If the speechwriter is putting that into his speeches it’s only because he (or she) has picked up on the fact that Pence loves the word."

Robert Leonard, a linguist at New York's Hofstra University, who is often retained by defendants and prosecutors in criminal cases involving threats, plagiarism and libel, told the Washington Post: "A problem with public people is that a lot of their published work is edited, so it's like mixing fingerprints or DNA. You don't always know who the real author is."

Watch U.S. Vice-President Mike Pence use the word "lodestar" in several speeches over the years: 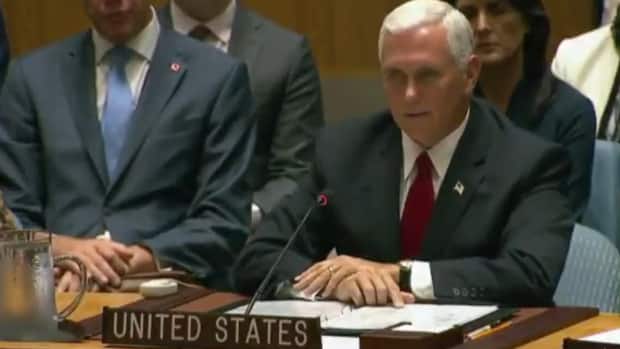 2 years ago
0:21
Footage of U.S. Vice-President Mike Pence using the word 'lodestar' over the years. The word has been interpreted as a possible clue to the identity of the White House insider who wrote an anonymous opinion piece in the New York Times. 0:21

'Throws the scent off'

However, it's possible, too, as noted in a recent Axios story about White House leakers, that the person who wrote the article purposely included certain words to cover his or her tracks.

As one leaker told Axios: "I usually pay attention to other staffers' idioms and use that in my background quotes. That throws the scent off me."

But Dao said it never occurred to him to change a word to help hide the identity of the author.

The article has prompted swift denials of authorship from a number of senior officials.

The Vice President puts his name on his Op-Eds. The <a href="https://twitter.com/nytimes?ref_src=twsrc%5Etfw">@nytimes</a> should be ashamed and so should the person who wrote the false, illogical, and gutless op-ed. Our office is above such amateur acts.

Other senior officials, including U.S. Secretary of State Mike Pompeo, Defence Secretary James Mattis, U.S. Ambassador to the UN Nikki Haley and National Intelligence Director Dan Coats, also stated they were not behind the piece.

Despite his denial, however, sleuths seem to be pointing to Coats as one of the leading contenders.

Under that theory, Michael Socolow, a communications professor at the University of Maine, outlined a six-point argument on Twitter, including that Coats publicly laughed at Trump when he was told the U.S. president wanted to invite Vladimir Putin to the White House.

But the most important clue?

"He worked very well [with] Colorado Senator Michael Bennet while in the Senate. That's the brother of the NY Times opinion editor, James Bennet," Socolow tweeted.

Others believe the writer may very well be someone that no one has ever heard of.

Glenn Kessler, the Washington Post's fact-checker, seized on Dao's explanation of how the New York Times decided to describe the author. Dao said: "I feel that we followed a definition that has been used by our newsroom in the past."

"This suggests Anonymous is not member of Cabinet or senior WH official, in which case it should not have been printed. 100s would qualify under this rubric," Kessler tweeted.

White House press secretary Sarah Sanders had her own advice "for those of you asking for the identity of the anonymous coward." Sanders tweeted that the media's "wild obsession" with the identity is "recklessly tarnishing" the reputation of thousands of "great Americans."

"If you want to know who this gutless loser is, call the opinion desk of the failing NYT."