Three years after Superstorm Sandy devastated much of New York City, the Big Apple is preparing for the dual threat of rising sea levels and another big storm. But critics say planners aren't going far enough to keep nature at bay.

Built on islands, NYC isn't ready for the dual threat of climate change and superstorms, critics 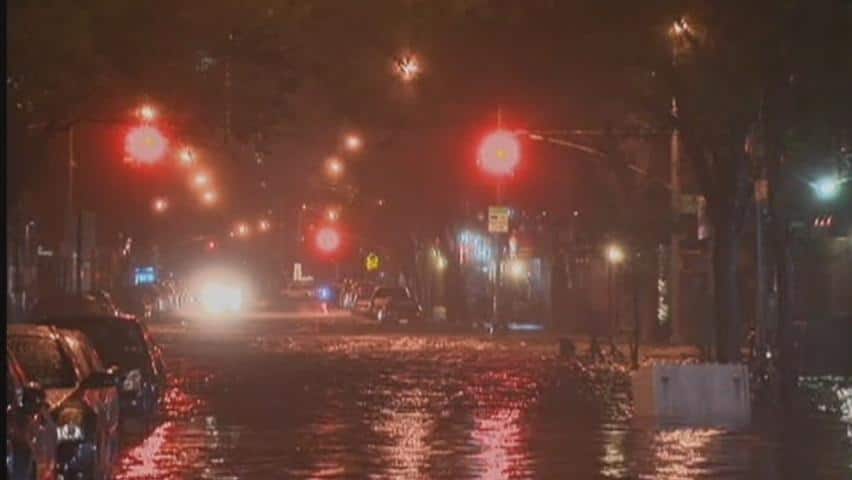 5 years ago
3:19
Can the Big Apple survive climate change? desc: New York City prepares for the next super storm 3:19

Three years ago, faced with the challenge of cleaning up after Superstorm Sandy, Joseph Tirone helped convince his fellow Staten Island homeowners that the best way to deal with another storm wasn't to rebuild but retreat.

Tirone organized a mass buyout with the state, and the residents of Oakwood Beach sold their homes, which were then demolished to allow nature to reclaim the land and provide a natural barrier to neighbourhoods further inland.

"So when these homes are gone and everything starts to grow back, nature will do what it intends to do," Tirone says. "It would be to act as a sponge. As the water comes in it's absorbed, as opposed to going further and further inland."

To date, all but a few dozen of the 314 homes here have been sold, at a total cost of approximately $117 million US.

Demolition, though, has been slow, leaving the once thriving oceanside community now a patchwork of empty lots and abandoned buildings.

"What's amazing to me was how they allowed this building in this area in the first place," Tirone says now, surrounded by four-metre high reeds that cover the marshy area on Staten Island's eastern shore.

As New York prepares for the dual challenge of another Sandy-like storm and potentially rising sea levels, Oakwood Beach has become a case study in how seaside communities might deal with the effects of climate change.

No retreat in Manhattan

A half-hour drive away, in Manhattan, where gleaming towers crowd up against the waterfront, retreat isn't an option, says Dan Zarrilli, who heads the New York mayor's Office of Recovery and Resiliency.

He oversees a 10-year, $20-billion plan that includes everything from building up coastal defences to upgrading building codes.

"It's tailored investments across the city," Zarrilli says of the plan. "It's not this one big silver bullet solution that we're going to wall ourselves off from the ocean."

One of the biggest, and so far approved, projects is called the Big U. It would create a berm, essentially a grass-covered hill, snaking from the East Side around lower Manhattan to act as a natural slope to protect the city from a storm surge.

The project won an international design contest and is in the first stages of planning.

But the challenge, says Amy Chester, executive director of Rebuild by Design, which ran the contest, is to seamlessly integrate the Big U with the city. The first section runs along the East River, a saltwater strait, near a large section of public housing.

"It's not going to just protect the public housing residents from storm surge, but its also going to absorb water from rain events, and create recreation areas for the residents to come play," Chester says.

Still, Columbia University climatologist Klaus Jacob says the city isn't looking far enough into the future with its plans. He says with sea levels predicted to rise as much as two metres by the year 2100, the threat of future storms will only be compounded, and infrastructure built now will be rendered obsolete.

"As sea level rises, it needs less and less severe storms to reach the same height as the flooding that Sandy reached," he said. '

Jacob says that relocation and resettlement are the only sustainable options for New York, and he points out the irony that New York City has been built on most of it's low-lying areas, while the higher, safer grounds are used as cemeteries.

His ideas though are considered radical. Like the suggestion to turn some streets in lower Manhattan into canals (in some cases returning them to their original state from past centuries) to better control water flow.

"You have to set aside a good fraction of a trillion dollars, several hundred billion dollars, and right now that's not in anybody's mental budget, let alone a real one," he says.

So is New York ready for another Sandy? Zarrllli says the city's plans can be adapted for future challenges.

"We're safer today than we were when Sandy hit, but we'll have a lot more to do before we'll be satisfied."

With the Big U not set to break ground until 2017, Amy Chester says more time is needed.

Jacob also says it will take more than time.

"We probably need still one or two more Sandys before the political decision makers will really listen to their own communities," he says.

Back on Staten Island, as reeds nearly four-metres high creep closer and closer to abandoned homes, Tirone worries about new construction along other parts of the waterfront.

"It's only three years after the storm and people have short memories," he says.

For him and the residents of Oakwood Beach, their fight  is over, and now, whatever climate change brings, he says, at least this part of Staten Island will be ready, with nature providing the best defence.