The new North American trade agreement isn’t even in effect yet and the Trump administration is warning Canada and Mexico might face legal actions under the deal.

The new North American trade agreement isn't even in effect yet and the Trump administration is warning Canada and Mexico they might face legal actions under the pact.

That threat came from U.S. Trade Representative Robert Lighthizer during hours of hearings Wednesday in the U.S. Senate and House of Representatives.

Lighthizer said the other countries can expect to have cases launched against them if they fail to meet their commitments after the agreement takes effect July 1.

His strongest warning was directed at Mexico — Lighthizer predicted a fight ahead to get the U.S.'s southern neighbour to implement the improved workers' rights it agreed to in the deal.

"We will take action early and often when there are problems," Lighthizer said, in an exchange specifically about Mexican labour.

He then issued a more qualified threat involving Canadian dairy.

Lighthizer said he assumes the Canadian government was acting in good faith when it agreed to open some of the country's dairy market to foreign competition.

But he said Canada has a history of playing games that effectively shut out foreign competitors even after a trade deal is reached.

"There are a number of ways that they could implement their program that would be less helpful to us than others," Lighthizer said of Canadian dairy.

"American farmers [must] get the full benefit of what they negotiated. If there's any shading of the benefits to American farmers, we're going to bring a case against them."

The complaint about Canadian dairy

Dairy was one of the most politically sensitive, hotly contested aspects of the 2017-2018 Canada-U.S. trade negotiations.

The specifics were hammered out in the final days of bargaining: Canada agreed to allow 3.59 per cent more market access for U.S. dairy products, and also to limit exports to the U.S. of dairy products that American officials view as unfairly subsidized.

Now, the American dairy lobby is fuming over the fine print released this week by the Canadian government on the liberalization process.

What it shows is that the process will be controlled overwhelmingly by Canadian industry. And it's happening in a hurry.

As of last Monday, would-be importers of American dairy products into Canada were given one week to apply for a share of the quota. A notice posted on the Global Affairs Canada website revealed that nearly all these import permits will be allocated to Canadian dairy processors.

What happens if, in this scramble, import permits wind up unused and foreign products can't get in?

That's not clear. All the rules say is that quota-holders must import 95 per cent of what they committed to — or they "may" be penalized next year with a quota reduction.

The U.S. dairy lobby said it feared rules like this.

It said Canada used a similar approach in the past, in an apparent allusion to related complaints about dairy from Europeans in the aftermath of the Canada-Europe agreement that took effect in 2017.

"Canada has chosen once again to manipulate its access commitments in order to protect its tightly controlled dairy market," said Jim Mulhern, president of the U.S. National Milk Producers Federation.

"U.S. farmers will bear much of the brunt of this biased interpretation of [new NAFTA's] dairy provisions."

He urged the U.S. administration to act quickly to hold Canada responsible.

The new Canada-U.S.-Mexico agreement includes different dispute panels: companies can sue a country for unfair duties under Chapter 10, or, likely more relevant in this case, under Chapter 31, one country can challenge another for failing to meet its commitments. 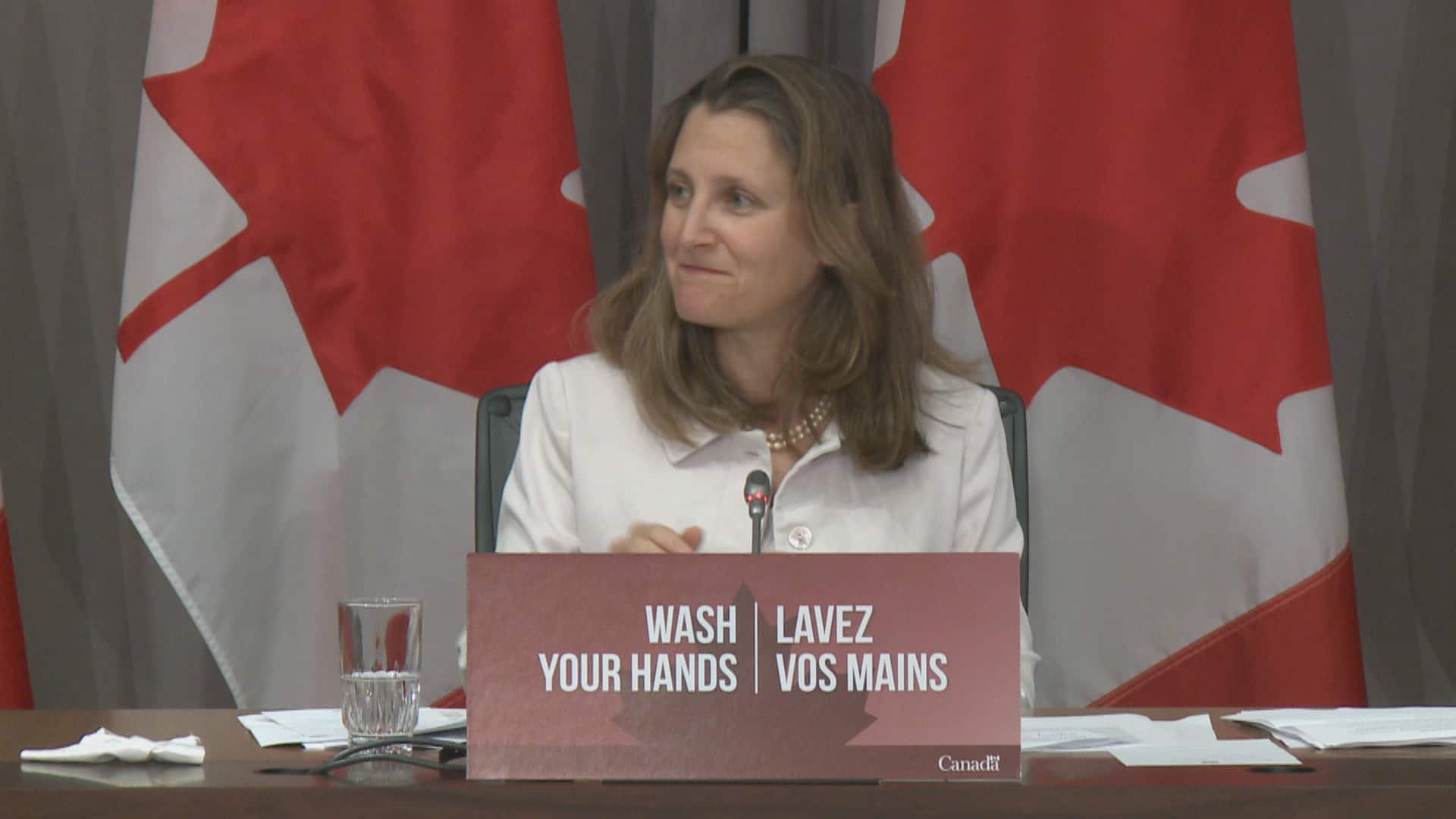 Freeland on U.S. threat of trade retaliation under new NAFTA

7 months agoVideo
1:10
After United States Trade Representative Robert Lighthizer accused Canada's dairy industry on Wednesday of having a "long history of manipulation" and failing to keep its trade commitments, Deputy Prime Minister Chrystia Freeland replied that Canada is good at following the rules and will continue to stand up for its interests. 1:10

"We are good at following the rules and we believe in doing that," said Chrystia Freeland, Canada's deputy prime minister, when asked about Lighthizer's comments.

"And we're also good at standing up for our national interest and we'll do that, too."

The head of Canada's dairy lobby, Jacques Lefebvre of the Dairy Farmers of Canada, said Wednesday that the U.S. got what it wanted in the new NAFTA, and said Canada's industry is complying despite the deal's "devastating" effects.

Any suggestion to the contrary is "at best, misinformed," he said in a statement.

Wednesday's hearing touched on a variety of other topics.

Lighthizer blasted other countries' proposals for putting a tax on digital products, which the Trump administration views as a de-facto penalty against American online platforms such as Google and Netflix.

The U.S. has threatened tariffs if countries proceed with such plans — the Trudeau Liberals and other Canadian parties proposed such a tax in their election platforms.

But Lighthizer praised U.S. officials for blocking a digital tax proposal last week at the Organization for Economic Co-operation and Development.

"The reality was they all came together and agreed that they'd screw America," Lighthizer said.

"That's just not something that we were going to be a part of."

He also made clear that he'll be perfectly happy if the World Trade Organization's top appeals body, currently paralyzed by a U.S. protest, never resumes functioning.

Lighthizer criticized the organization for over-reaching its mandate and suggested world trade wouldn't suffer if it reverts to the system that existed before that appellate body was created in 1995 to settle disputes.

"If it never goes back into effect, I think that would be fine."

He also raised the possibility of a new flareup over steel and aluminum. Last year, the U.S. dropped tariffs on Canada and Mexico, with certain conditions attached.

The agreement would allow the U.S. to reimpose tariffs on specific steel or aluminum products if import volumes of those products suddenly surge.

Lighthizer said cross-border imports have indeed spiked for certain types of steel and aluminum, and he's talking to Canada about it.

"It's something that's of genuine concern," he said.

Most U.S. industry, and lawmakers, oppose new tariffs. Lighthizer was urged by Republican Sen. Chuck Grassley not to make any sudden moves without first consulting Congress.