One year after the devastating earthquake that claimed almost 9,000 lives in Nepal, most of those who lost homes remain in temporary accommodations and millions of dollars in aid money remain unspent, CBC's Saša Petricic reports. 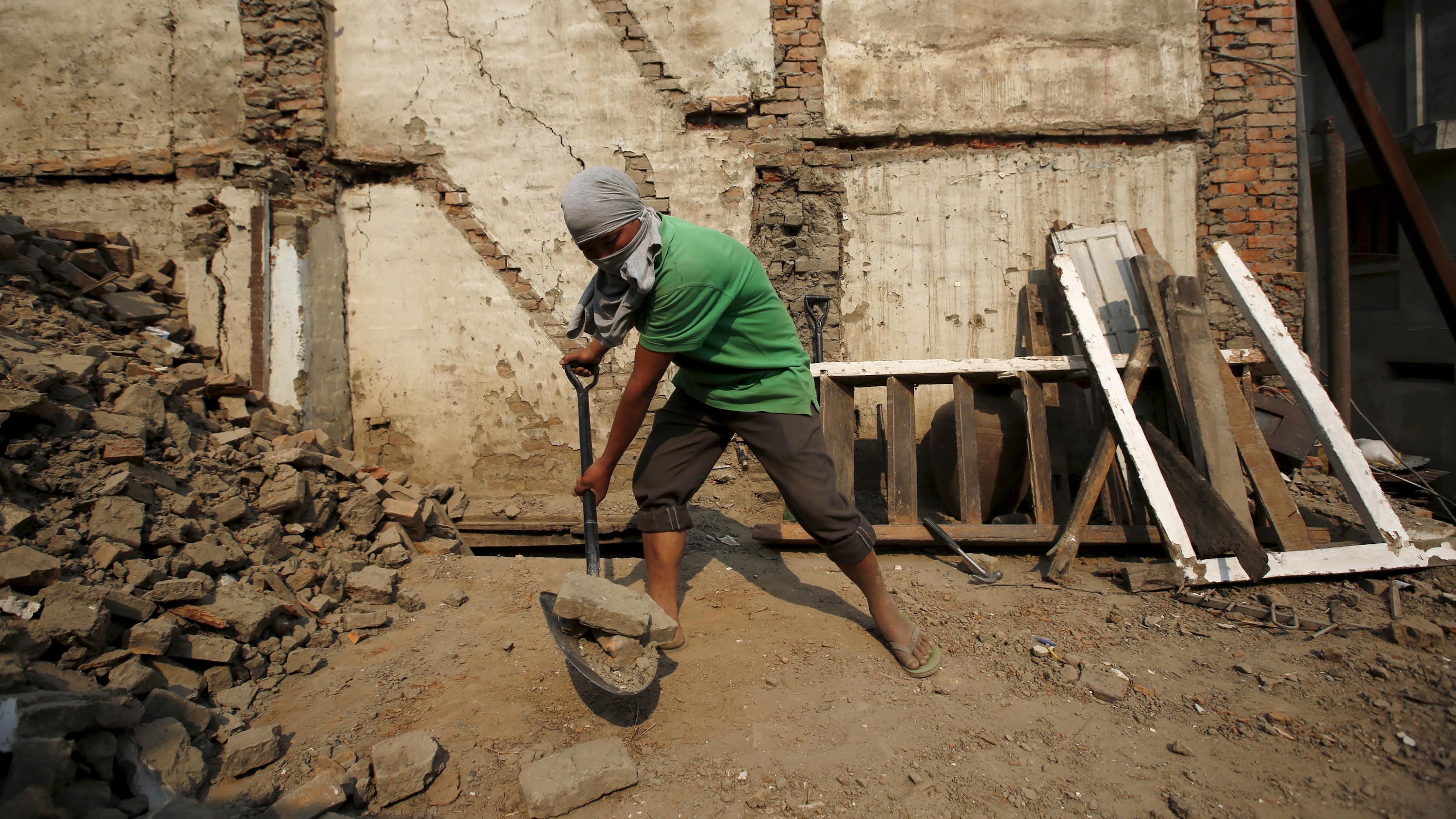 Nepal one year after the earthquake

5 years agoVideo
2:15
Saša Petricic returns to Nepal, one year after a devastating earthquake shook that country. Most of the rubble is gone, but rebuilding is slow. 2:15

The old man chooses his rocks carefully from the pile. One is too big, another too flat. But his options are limited as he desperately tries to build a shelter before the monsoons come in a few weeks. He uses nothing more than the chipped remains of his old house, and mud.

"Someone should help me build this, but there is no help from anywhere," Rudra Dhital says. "And no money. If we get another big earthquake, I'm sure this house will not last. It will fall on top of us. But what else can I do?"

It wasn't supposed to be like this. Not here in Sindhupalchowk, in the rugged foothills of the Himalayas, where about 3,500 people died in the earthquake on April 25, 2015. Not anywhere in Nepal, where the disaster claimed more than 8,700 lives.

A year ago, when the 7.8 magnitude quake knocked down Dhital's home along with 600,000 others across the country, he was told there would be money and materials, hope and help. The humanitarian groups reached his remote village with emergency aid, tarps and sheets of corrugated metal. The world community promised billions of dollars for Nepal.

So far though, promises are all Dhital and most Nepalis have. That, and a year's worth of emergency aid, the temporary materials international organizations rush into disaster zones just to make sure people survive for a while. But it is a bandage, not a cure.

"Usually at this point, one year on, you are seeing much more of a recovery as opposed to an emergency response," said Mike Bruce, a Canadian working with the relief group Plan International.

He was here in the days after the earthquake, and he's been back regularly since.

Many aid organizations have been active in Nepal, and many foreign governments have sent money. Of the $4.4-billion US pledged globally, about $2.8-billion US has been delivered.
​
That includes $51.7 million Cdn, a mix of private donations and matching funds from Ottawa that were set aside in the month after the disaster, according to numbers released today by the Global Affairs department.

Very little of that has been spent, and virtually none of it has been spent on rebuilding permanent schools or housing. That's largely because the government of Nepal ​has only now come up with a plan to construct earthquake-resistant houses; ​it's just finishing up ​lists of who is eligible for government subsidies; and ​only today, on the first anniversary of the quake, are ​non-governmental organizations ​being ​given the go-ahead to build anything but temporary housing.

The government says the delays are unfortunate and blames a constitutional crisis that occurred a few months after the earthquake. It sparked protests, which blocked a key border crossing with India and led to shortages of fuel and supplies in Nepal. Ram Thapaliya, joint secretary of the National Reconstruction Authority, says delay​s were unavoidable and promises widespread reconstruction is now set to begin.

"It is very frustrating … to me also," said Thapaliya. "But there is no faster way. Within a very short span of time, we can't build 600,000 houses, not within two, three months. It takes time."

But that hasn't quelled the anger. Many believe government corruption is the real cause of delays.

Kashish Shrestha is an environmental activist in Kathmandu.

"'Where's the money?' has been the big question," he said. "And there is no clear answer to that.

Even the NGOs are frustrated.

Indeed, the villages and neighbourhoods I see here look no different than the hard-hit areas I saw in the days right after the earthquake: piles of rubble.

One exception is the small village of Shikharpur, perched on a hillside overlooking the Bagmati River, east of Kathmandu. Its blue, metal roofs glint in the sunshine. Children run around excitedly through the frames of temporary houses that are a huge improvement over the wreckage they replaced. This and a handful of other villages are being helped by $1-million from the Canadian government and another $350,000 donated through Plan International.

A key component of the rebuilding effort has been training villagers to lay brick.

"This is so different from how we used to make houses," said Ram Majdhi, as he spread mortar. "It's much stronger."

Majdhi lost five members of his family in the earthquake.

"With these walls, if another earthquake happened, we'd be safe," he said.

But this construction activity is rare in the countryside and only slightly more common in Kathmandu, where those with enough money to rebuild have started. Some are investing in much stronger foundations and reinforced brick and concrete walls, a novelty here.

Even in Kathmandu, though, the tent cities persist.

My dreams are gone, and after this year, I just worry about surviving.- Bagwar Gdadji , 19

Several thousand Nepalis call a dusty lot in the middle of the capital home. Aid organizations occasionally drop by with a load of rice or maybe some medical help, but they have largely moved their operations to the countryside, where the need is considered greater. People here say they can't remember when someone from the Nepali government last visited.

In tent No. 375, I find 19 year-old Bagwar Gdadji. She is breastfeeding her daughter and worrying that the baby isn't getting enough nutrition. Her baby was born on the day of the earthquake last year, and the family moved into the tent shortly after. The house where they lived was destroyed.

Gdadji says aid workers have only come to see her once in the past year. There have been no offers of subsidies for housing, which has become much more expensive in Kathmandu since the quake.

"I had dreams for her before she was born," says Gdagji, glancing at her daughter. "Now, I see no way out of here. My dreams are gone, and after this year, I just worry about surviving."