An anti-fascist activist who infiltrated a neo-Nazi organization walked away with a trove of audio and video recordings that provide a rare insight into the minds of members of such groups and their radicalization, a researcher says.

‘I was in the right place at the right time,’ anti-fascist activist says

Six days before Canadian combat military engineer Patrik Mathews was arrested by the FBI in January 2020, he was offering military training to members of a neo-Nazi group.

On recordings made by an anti-fascist activist who infiltrated The Base, Mathews can be heard discussing how he would conduct a paramilitary training event in Michigan, teaching members of the organization skills he had learned in the Canadian army.

He offered to coach members in "guerilla warfare, reconnaissance patrols and how to use terrain so they can maximize their impact."

"When we move, we don't want to be seen. We want to go from point A to point B with as much stuff as possible, and then when we're there we strike like thunder," Mathews can be heard saying.

The man who recorded the conversation calls himself Tradian and is an anti-fascist activist who infiltrated The Base from its inception in the summer of 2018.

When he walked away in February 2020, Tradian took with him 80 gigabytes worth of screen grabs, videos and audio recordings. Most of the recordings — about 100 — were vetting sessions of men applying for membership in The Base. 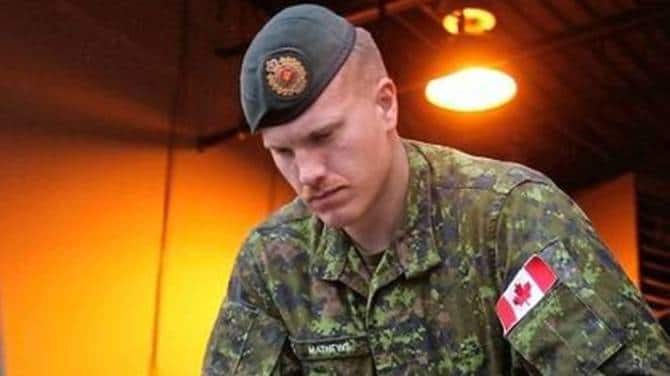 Tradian gave CBC's The Fifth Estate and researchers access to his material.

"People like Mathews, perfect for this gig," Tradian told The Fifth Estate in his first interview.

"People with military experience already have lots of firearms training, they've been through basic boot camp. If they had more advanced training, then they could just pass that on."

Tradian's efforts to secure access to a neo-Nazi organization from its beginning to its end gave researchers an opportunity to study a full life cycle of a far-right group.

WATCH | The infiltrator on Patrik Mathews:

'Perfect for this gig'

5 months ago
Duration 0:09
The Base infiltrator tells The Fifth Estate why Canadian army reservist Patrik Mathews was considered a valuable member of the neo-Nazi organization.

The Base is a neo-Nazi organization established online in 2018 to gather members of other white supremacist groups worldwide and give them military training. In February 2021, Canada designated The Base as a terrorist entity.

Bill Blair, the public safety minister at the time, had described it as a "neo-Nazi organization, nihilistic and accelerationist in their rhetoric."

Far-right accelerationists believe that violence is the only way for them to pursue their political goals to cause the collapse of liberal democracies and replace them with white ethno-nationalist states.

CBC agreed to conceal Tradian's identity and change his voice for reasons of personal safety.

"I don't want to have someone try and shoot at me."

WATCH | Tradian explains why he fears for his life:

'There'll be people who would want to shoot at me'

5 months ago
Duration 0:10
Tradian, the man who infiltrated a neo-Nazi organization, explains to The Fifth Estate why he has to remain anonymous.

Tradian said he had been looking to join a neo-Nazi group in North America for years but never managed to get past the vetting session.

"I was the right person in the right place at the right time, and the thing that I was looking to do was engineer a disaster that would kneecap a militant national socialist movement at a very important time."

Once in, he began making screenshots of The Base's encrypted chat room from the inception of the group in mid-2018.

For 18 months, he saved and carefully catalogued 46,000 screenshots of internal chats and downloaded more than 5,000 images and videos.

WATCH | Inside the secret chats:

Inside the secret chats

5 months ago
Duration 0:26
Tradian scrolls through an encrypted app used by the members of the Base to communicate.

He also recorded around 100 hours of vetting calls as white supremacists from around the world queued up to join The Base.

In 2020, shortly after walking away from the group, Tradian shared his material first with the Southern Poverty Law Center (SPLC), a U.S. non-profit monitoring the activities of domestic hate groups. He later shared it with international media organizations.

The Base Tapes, as they came to be called, became the subject of several high-profile podcasts in the United States and Australia.

In all, Tradian's material amounted to 80 gigabytes of what experts say provides a significant insight into a contemporary neo-Nazi organization.

"In this field, it's hard to get primary sources like this and to get this kind of insight into what is really a secretive group," said Cassie Miller, a senior research analyst with SPLC.

Most of the information experts get access to comes from former members of neo-Nazi organizations, Miller said, but with the tapes, there are "people in a conversation with people who they believe are like-minded, explaining their radicalization."

"It is a Nazi group, and there is no question about that to me. Every single person who joined was a Nazi of some form or another," said Tradian.

"There's a lot of different Nazi projects going around and so you basically just pass as a genuine Nazi and say all the right words and they'll come to you."

Tradian said he was assigned a senior role by the group's founder, Rinaldo Nazzaro.

Nazzaro, he said, invited him to join The Base's leadership team and tasked Tradian with interviewing potential recruits.

He participated in and recorded around 100 vetting conversations.

During those vetting calls, Tradian said he was exposed to extremely racist, anti-Semitic, Islamophobic and deeply misogynistic views.

Although there was always a chance he would be exposed and his life would be in danger, Tradian believed he had an obligation to stick around.

"The best way to stop these guys is to identify them, and with a vetting call you get everything. They'll tell you previous organizations they were with. They'll talk about their personal lives, their age, their racial breakdown, previous aliases that they held, all that stuff."

Inside a neo-Nazi social network

SPLC researcher Miller assigned herself the task of listening to every hour of The Base Tapes and told The Fifth Estate that listening to the material was extremely disturbing.

"These were young men from all over the United States and all over the world who had come to believe that the problems they faced could be blamed on people of colour, on Jews, on women, and that the only way to deal with it was through violence," Miller said.

Tradian said he frequently heard men advocate the theory of "universal order," which he said means "you kill literally everybody that's not white on the Earth."

There were others, as well, hidden behind their pseudonyms, talking about the reasons to join The Base.

"I feel that the only way things are gonna get better is if a collapse happens and a new dawn arises," said "lucien88," a 19-year-old from Michigan.

"The reason why I wanted to join The Base is to fight for my future and for the future of my future children," said "The Ecologist," a 20-year-old from Oregon.

When asked by The Fifth Estate how difficult it was to listen to the conversations, Tradian said: "I had to deaden my sight in order to engage with this stuff, deaden my senses and get rid of my gag reflex."

Tradian said Nazzaro would often tell new recruits that The Base wasn't interested in "keyboard warriors."

Nazzaro wanted men who were willing to engage in military training and prepare for the eventual collapse of Western liberal democracies, said Tradian.

According to Miller, accelerationists believe that liberal democracies are heading toward an inevitable collapse and by committing acts of violence, they believe they can hasten the collapse and be in a position to take control of the state.

'He looked me dead in the eye'

Tradian said he met Nazzaro in person at a bar in New York in early 2019.

It was during that meeting with Nazzaro that Tradian said he was given two trophies — a flag of The Base, with a Nazi version of a Three Percenter's logo, and a dagger with the group's insignia carved into the blade.

Tradian said he has since disposed of the dagger and plans on burning the flag.

WATCH | The founder of The Base gave this flag to Tradian:

5 months ago
Duration 0:14
Tradian, the Base infiltrator, shows The Fifth Estate the flag he received from the founder of the neo-Nazi organization.

The unravelling of The Base

By the time Tradian walked away from the group, FBI undercover agents were also on the inside, posing as members.

The information they collected eventually led to arrests and charges against a dozen members of The Base.

They included three members of a cell in Georgia that was plotting to kill prominent Atlanta anti-fascist activists.

Three other members of a Delaware cell that included Mathews were arrested days before they could carry out a plot to disrupt a Jan. 20, 2020, pro-gun rally in Virginia.

The rally went off without a single shot being fired.

Mathews pleaded guilty last year on charges related to what the FBI had described as a neo-Nazi plot to instigate a race war in the United States.

In October, a judge sentenced Mathews to nine years in prison.

WATCH | Who were the members of The Base?:

'Every single person who joined was a Nazi'

5 months ago
Duration 0:12
The Base infiltrator tells The Fifth Estate who were the people who were members of the organization.

Before walking away two years ago, Tradian said he renamed the main online propaganda channel of The Base a "honey pot."

Asked what he meant by a "honey pot," Tradian said The Base is "a great place to go if you want to get your name thrown in a database and get caught."

"I don't consider it a threat anymore, I consider it to be a trap, and I've mocked them mercilessly and it's been fun," Tradian said.

Miller said that "no one wants to be associated with a group that experienced this number of arrests and was infiltrated so many times."

But the ideology of The Base is still a threat, Miller said.

"Members of The Base are deeply committed to a violent white power ideology, and those people don't just disappear once the group disappears."

At least 12 group members were arrested in the U.S. in 2020 and 2021. Six were sentenced to prison for crimes including murder plots against anti-fascist activists, threats to journalists and human rights advocates. Others are awaiting their sentences or their trials.

Tradian believes that former members of The Base will go on to form new crews.

"They're getting more bold, more open. There's a lot of them and all they have to do is wink at each other with just the right words, just the right images, and then link up and do some damage."