Nick Nurse has won at every level of basketball he's coached, in almost every league, and in many countries. Now the Toronto Raptors coach has done it on the sport's biggest stage. His success comes as no surprise to those who met him along the way.

It's been a long road from rural Iowa to getting shoulder massages from Drake to winning Canada's first NBA championship, and in between, Nick Nurse has seen it all.

Growing up on Elm Street in the small Iowa town of Carroll, Chris Short always knew his childhood friend was something special.

Whether it was the local Olympics they set up in 1976 to coincide with the Montreal Games, where Nurse dominated every sport they had, or his success in varsity athletics, Short says Nurse had that intangible "it" factor.

"He was a quarterback on the football team, pitcher and shortstop on the baseball team and heck, he could even pole vault," said Short.

In 1985 Nurse was named Des Moines Register Athlete of the Year as he led Kuemper Catholic High School to its only state basketball championship.

During those high school years, Short saw not only Nick Nurse the athlete but also the beginnings of the future coach. He recalls playing in a tournament with Nurse against a more talented team. Down by a point or two with just seconds to play, Nurse took over the huddle from Short's dad, the coach, and drew up a play.

It didn't work to perfection because Nurse ended up with the ball at his own free throw line. He launched a 70-foot shot that banked in, giving his team the win and leaving Short and his teammates in awe.

To call Nurse's path to the NBA unconventional would be an understatement. The route he took looks like a poorly planned European backpacking adventure combined with a Middle America road trip.

The results, though, are undeniable: two championships in the British Basketball League, two in the NBA's G League and now the crowning jewel, Canada's first NBA Finals championship in his rookie season as an NBA head coach after a 114-110 victory over the two-time defending champion Golden State Warriors on Thursday in Game 6 of the NBA Finals. He's the ninth coach in NBA history to reach the top of the mountain in his first season.

After the game, he spent a moment on his least favourite subject: himself.

He said he hopes his experience will inspire and spark the imagination of other coaches toiling in basketball obscurity.

"I think you can't do very good work if you don't love what you're doing and I just never really got discouraged. I didn't really care (about) the level I was coaching at and I was just trying to learn and get better, that's it.

He spent five seasons as an assistant with the Raptors before being promoted to head coach last year, replacing the NBA coach of the year, Dwane Casey. It was a controversial move necessitated by a string of unsuccessful playoff runs.

Nurse's 58-24 record in 2018-19 was one game worse than Casey's 59-23, and this year's Raptors ended up in second place overall. But in the playoffs they overcame the Philadelphia 76ers and Milwaukee Bucks before notching their biggest victory over the Golden State Warriors Thursday night in Oakland.

The term rookie seems odd to apply to 51-year old Nurse, who got his first head coaching job at Grand View College in Iowa at age 23. At the time he was the youngest head coach in the U.S. He then spent two seasons as an assistant at the University of South Dakota, then set off for England where he'd done a stint at a player-coach.

Over the next decade he coached in Birmingham, Manchester, London and Brighton. He won two BBL championships, was an all-star head coach six times and coach of the year twice.

Over 30 years as a coach he's gone through five countries with 15 teams, including a stop at the Olympics. The one constant: he's been a winner.

"A word I use is 'genius,'" said Curtis Stinson, who won an NBA G League title under Nurse with the Iowa Energy in 2011.

"He's one of the guys that understand the game a lot. He understands players and situations. He studies it. Being a genius is knowing how to adapt to players and making the right decision with the style of players he has."

Stinson, a journeyman point guard, says Nurse often showed his take-no-prisoners, try-anything style that fans came to appreciate during the NBA Finals. Among the tricks Nurse employed during the Raptors' championship run, the never-before-seen in the NBA box-and-one defence that helped slow down Warriors star Steph Curry in Game 2 and again in Game 6. Curry referred to it as "janky".

'Out-think the other coach'

"I think coach Nurse is successful because he loves the game, he's a student, he's always watching, always finding ways to out-think the other coach," said Stinson.

"He does those different things on the defensive end that coaches have never done, it was things I'd never even heard of or thought that you could do."

Raptor Pascal Siakam credited Nurse's ability to use the players he has effectively and give them confidence to succeed.

"Not only me but giving confidence to guys like Fred (VanVleet) and Norm (Powell)," Siakam said after the game.

Fred VanVleet called Nurse the captain of the Raptors ship who's helped them weather storms while always keeping other teams on their toes.

"He's made some unusual adjustments and experimented with things and some things worked and some things didn't, but you know he was trying, he tried everything and you got to give him a lot of credit."

"He's been to the bottom, now he's at the top. He's going to do whatever it takes to win. Us as Iowa guys, we just bear down and we don't care how it gets done, we just want to win." 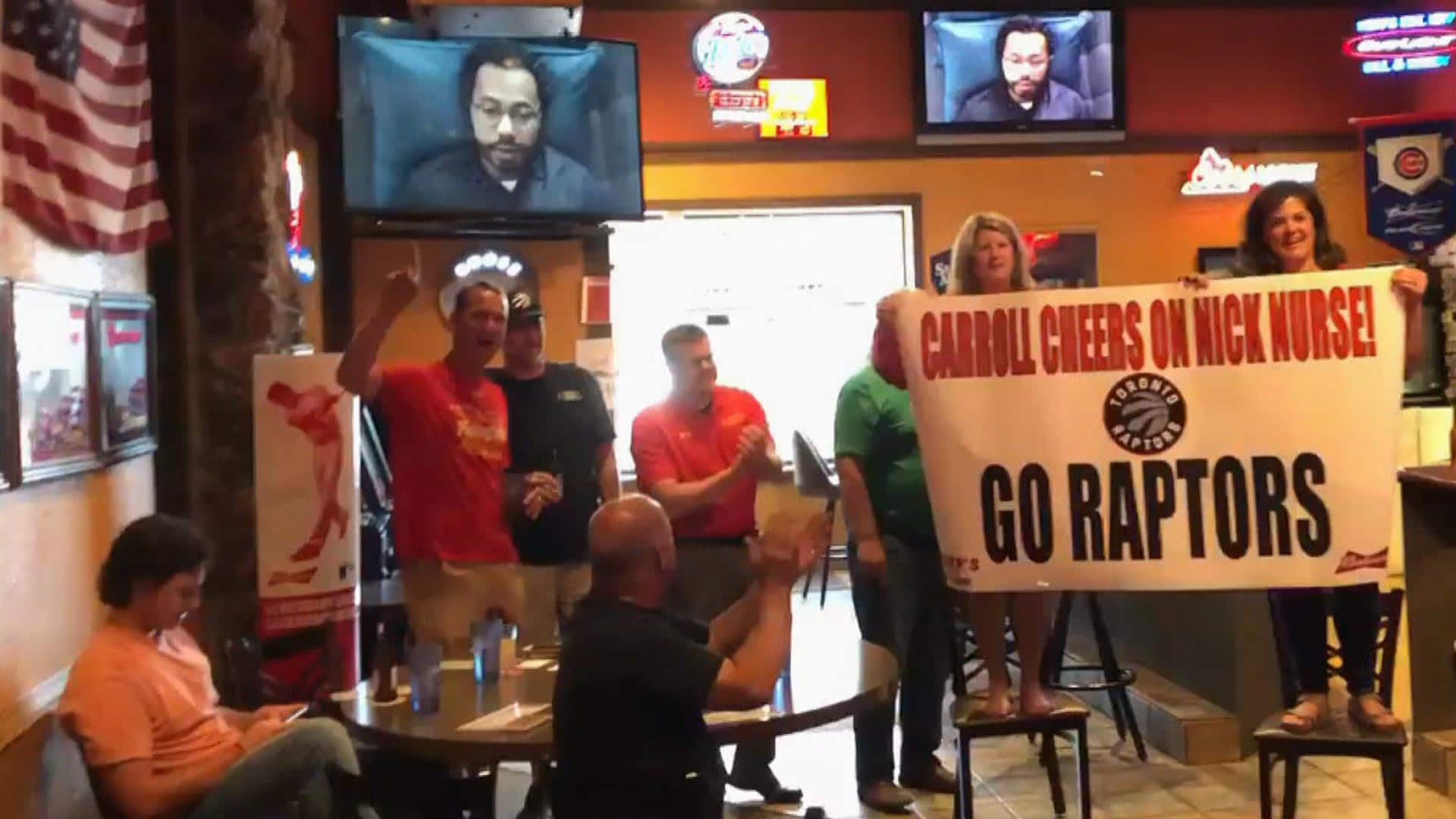 'A guy from Carroll'

1 year ago
0:26
Patrons at Kerp's Tavern in Carroll, Iowa, the hometown of Raptors coach Nick Nurse, cheer on the Toronto team ahead of Game 6. 0:26

At Kerp's Tavern in Carroll, Raptors fever, or more accurately, Nick Nurse mania, has slowly taken over. More than two dozen fans (including apparently Nurse's Grade 3 girlfriend) have been gathering to cheer on their hometown hero.

"There's no NBA team in Iowa, so when a guy like this is the head coach of not only an NBA team but a really good NBA team, people just jumped on board, and they've been going nuts during the playoffs," said Brandon Hurley, a sports reporter with the Carroll Times Herald who drove 14 hours to Toronto to cover Game 5 and remained in the city to cover the aftermath of Game 6.

Hurley has been covering Nurse for years and says the Raptors head coach exemplifies Iowan values.

"He has that strong work ethic. If you just look at his career, he's always worked really, really hard and been dedicated to make that next step. The other thing that really makes him an Iowan and a guy from Carroll is he's really nice and really personable and really easy to approach."

That Nurse has coached a team to the NBA title comes as no surprise to Chris Short, his boyhood friend.

Short says he predicted in October the Raptors would win, and even his mother, who doesn't follow sports, was on the team's bandwagon.

"My mother doesn't know anything about sports, she was calling me five times a week wanting to know when the next Raptors game is going to be."

He says the Raptors' run has special meaning for her because she was close to Nurse's parents in Carroll, including his mother Marcella, who died in December.

Stinson says he knew a moment like this would come one day for Nurse, "It was all I ever said: 'Nurse is gonna shock the world,' and he's doing it right now."