NATO increasing troops in Afghanistan again, but Trudeau says Canadians won't be among them

Two years after winding down its military operation in Afghanistan, NATO has agreed to send more troops to help train and work alongside Afghan security forces. Prime Minister Justin Trudeau says Canadian trainers won't be among them.

Two years after winding down its military operation in Afghanistan, NATO has agreed to send more troops to help train and work alongside Afghan security forces.

But Canadian trainers won't be among them, Prime Minister Justin Trudeau told reporters in Charlottetown on Thursday.

"There are absolutely no plans to send any troops back to Afghanistan," he said. "We have served there with distinction, with valour, over 10 years and made a significant impact."

Trudeau said Canada is "always willing to step up around the world" and play a leadership role, but its efforts are now focused elsewhere.

"Canada is looking to be helpful in other places, as we are in Latvia, as we are in Northern Iraq and as we will continue to engage including in United Nations peacekeeping missions once we make a determination about where to go," he said. 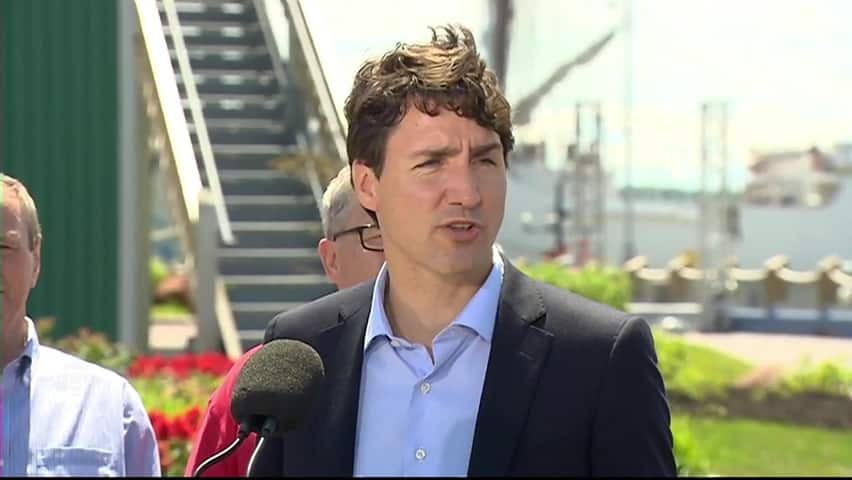 4 years ago
0:54
The Prime Minister was speaking to reporters in Charlottetown 0:54

The new troops announced Thursday would be divided between the NATO training and advising the mission in Afghanistan and U.S. counterterrorism operations against the Taliban, al-Qaeda and Islamic State militants.

NATO commanders say they need as many as 3,000 additional troops from among the allies. That number does not include an expected contribution of roughly 4,000 U.S. forces.

'In it for the long haul'

Britain has said that it would contribute just under 100 troops in a noncombat role.

"We're in it for the long haul. It's a democracy. It's asked for our help and it's important that Europe responds," British Defence Secretary Michael Fallon told reporters. "Transnational terror groups operate in Afghanistan, are a threat to us in Western Europe."

European nations and Canada had been waiting to hear what U.S. Defence Secretary Jim Mattis will offer or seek from them. U.S. leaders have so far refused to publicly discuss troop numbers before completing a broader, updated war strategy.

Marine Gen. Joseph Dunford, chairman of the U.S. Joint Chiefs of Staff, was in Afghanistan this week, meeting with commanders to gather details on what specific military capabilities they need to end what American officials say is a stalemate against the resurgent Taliban.

The expected deployment of more Americans is intended to bolster Afghan forces so they eventually can assume greater control of security.

Stoltenberg said the NATO increase does not mean the alliance will once again engage in combat operations against the Taliban and extremist groups. NATO wants "to help the Afghans fight" and take "full responsibility" for safeguarding the country.

He did acknowledge "there are many problems, and many challenges and many difficulties, and still uncertainty and violence in Afghanistan."

"We are on the front line in the fight against terrorism," Radmanish said in a telephone interview with The Associated Press in Kabul, the Afghan capital.

But Afghan lawmaker Mohammad Zekria Sawda was skeptical. He said the offer of an additional 3,000 NATO troops was a "show," and that NATO and the U.S. were unable to bring peace to Afghanistan when they had more than 120,000 soldiers deployed against Taliban insurgents.

"Every day we are feeling more worry," he said, "If they were really determined to bring peace they could do it," Sawda said.

As the war drags on, Afghans have become increasingly disillusioned, and even former Afghan President Hamid Karzai has questioned the international commitment to bringing peace.

Many Afghans, including Karzai, are convinced that the United States and NATO have the military ability to defeat the Taliban. But with the war raging 16 years after the Taliban were ousted, they accuse the West of seemingly wanting chaos over peace.