The Moria refugee camp on the Greek island of Lesbos felt eerie in the aftermath of the fire that swept through its core. CBC's Margaret Evans reports from the old military base about a 20-minute drive inland from the main port of Lesbos.

Margaret Evans · CBC News · Posted: Sep 21, 2016 5:22 AM ET | Last Updated: September 22, 2016
1 of 0
The Moria refugee camp on the Greek island of Lesbos has been through more than one incarnation, none of them particularly pleasant, since the refugee crisis began in 2015.

But it has never felt quite as subdued or eerie as it did this week in the aftermath of the fire that swept through its core, incinerating some of the camp's pre-fabricated structures along with 800 sleeping spaces, tent flaps burnt off the steel structures holding them up, now standing naked like a collection of spindly legs.

It was as if the camp, or its residents, had frightened themselves by the depths of their own anger or despair, their own capacity for self-harm. People who had nothing now had even less.

"I have been sitting here for six months and daily there are problems, daily problems, happening in the camp," said Hassan, a 29-year-old father from Mosul, anxious to speak to the international media, convinced the outside world doesn't know how bad it is in the camp or how many people now find themselves stranded in it.

Hassan says his twin nine-year old daughters inhaled a lot of smoke before he managed to get them out of the camp while the fire raged.

Moria is an old military base about a 20-minute drive inland from the main port of Lesbos. It has a maximum capacity of about 3,000. But as an official "hot-spot" registration centre, it has become home to more than double that.

There's nothing at all "hot" about the way that registration is proceeding though. The asylum application process is notoriously slow, adding to the sense of frustration and rivalry between different groups in the camp as they await news of their respective futures.

Hassan says he has yet to be interviewed. He thinks Syrians and Afghans are chosen above Iraqis and Pakistanis. He doesn't understand it, he says, given that his family has fled one of the Iraqi cities controlled by the Islamic State of Iraq and Syria (ISIS) where he says three of his brothers have been killed.

There are conflicting reports about how the fire in the camp started, quickly spreading through nylon pup tents. Some say Afghan and African groups started fighting over how best to protest worsening conditions, with the Africans demanding a hunger strike.

Another says panic broke out when false reports were spread of a mass deportation back to Turkey. In a camp as stretched and full of unhappy people as Moria is, rumours spread quickly, residents weigh them against their own circumstances.

It's like a powder keg. Families at Moria say they're unhappy at being mixed in with so many young, single men, many unaccompanied minors. Violence and crime are ever present, and women say they're not at ease.

A year ago, even a lengthy stay of six weeks to a few months at Moria was seen as a small price to pay to reach your final destination. But now the stay here has a sense of permanency, or even failure, for people who've risked much to get this far.

Under the deal reached between the European Union and Turkey last spring, asylum seekers will go no further than this island until they've lodged a claim. If it fails, they can be deported back to Turkey.

Economic migrants know this might well be the end of the road. There are over 60,000 refugees and migrants waiting in Greece as a whole.

"We were not expecting them to keep us like this," said a young man from Ghana. "We are living like animals. Winter is coming."

Patience with the situation on the island is being stretched thin for the local community. Many islanders were happier when the number of refugees arriving on Lesbos — sometimes 3,000 to 5,000 per day last summer — was greater, but they kept on going.

Now the islanders fear they have simply come home to a detention centre – one that will fester, but keep growing. 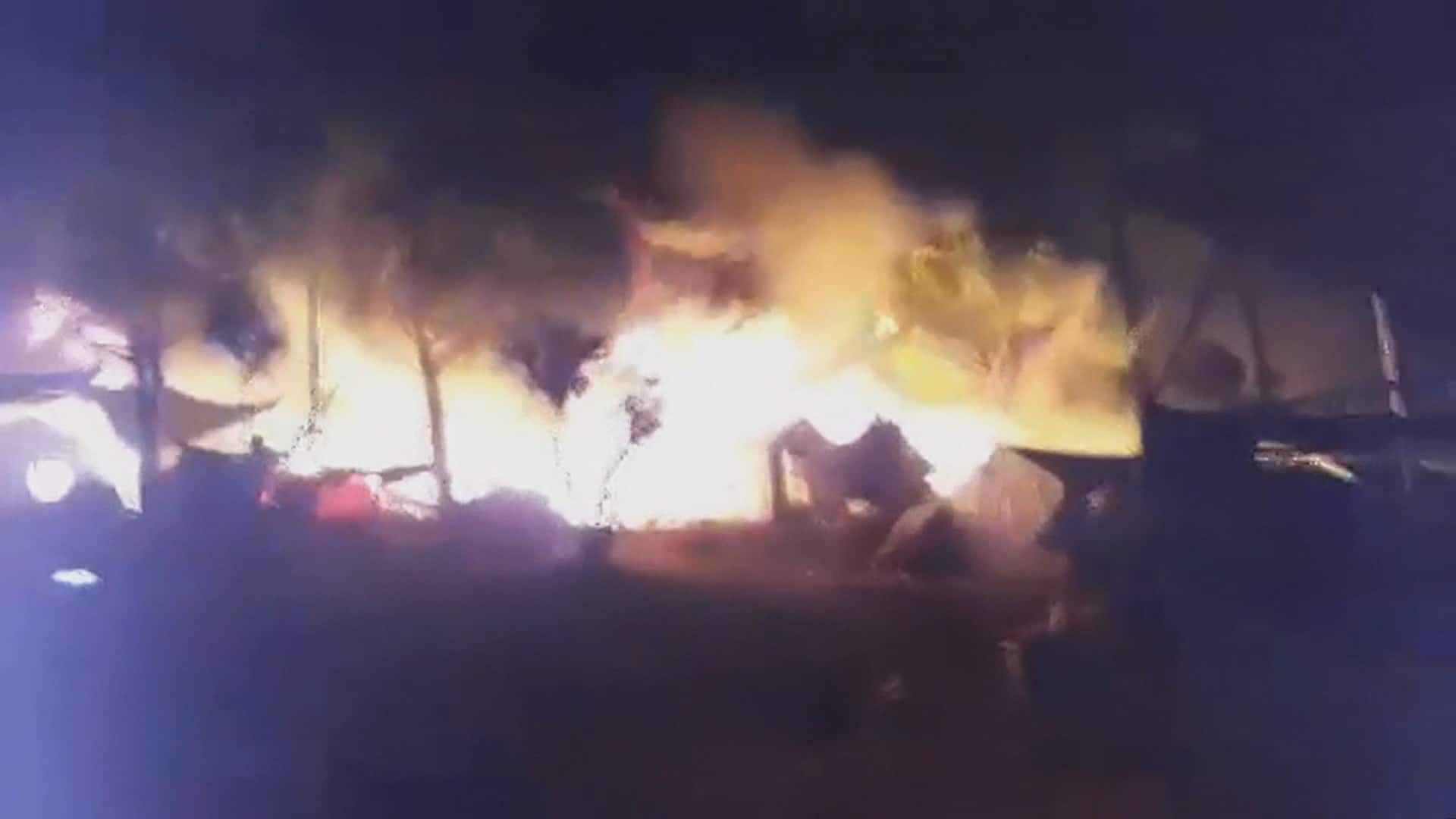 4 years ago
2:20
Thousands of people flee a migrant camp on Lesbos after a fire swept through tents and housing cabins 2:20