'This is not a drill': Accidental ballistic missile alert causes panic in Hawaii

A false alarm that warned of a ballistic missile headed for Hawaii sent the islands into a panic Saturday, with people abandoning cars in a highway and preparing to flee their homes until officials said the cellphone alert was a mistake. 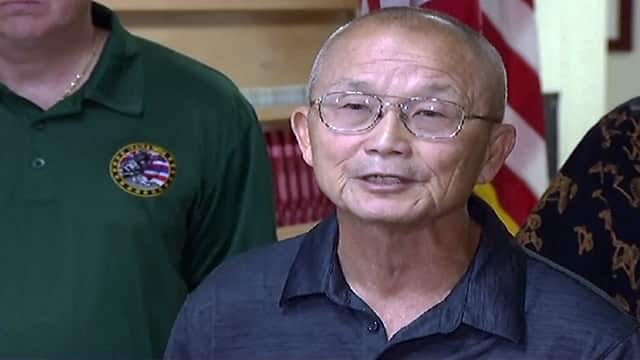 3 years ago
1:58
Hawaii Emergency Management administrator Vern Miyagi explains why and how a false ballistic missile alert was sent 1:58

A false alarm that warned of a ballistic missile headed for Hawaii sent the islands into a panic Saturday, with people abandoning cars on a highway and preparing to flee their homes until officials said the cellphone alert was a mistake.

In a conciliatory news conference later in the day, Hawaii officials apologized for the mistake and vowed to ensure it will never happen again.

"We made a mistake," said Miyagi.

For nearly 40 minutes, it seemed like the world was about to end in Hawaii, an island paradise already jittery over the threat of nuclear-tipped missiles from North Korea.

The emergency alert, which was sent to cellphones statewide just before 8:10 a.m., said: "BALLISTIC MISSILE THREAT INBOUND TO HAWAII. SEEK IMMEDIATE SHELTER. THIS IS NOT A DRILL."

The Hawaii Emergency Management Agency tweeted there was no threat about 10 minutes after the initial alert, but that didn't reach people who aren't on the social media platform. A revised alert informing of the "false alarm" didn't reach cellphones until 38 minutes later, according to the time stamp on images people shared on social media.

NO missile threat to Hawaii.

The incident prompted defence agencies including the Pentagon and the U.S. Pacific Command to issue the same statement, that they had "detected no ballistic missile threat to Hawaii."

The White House said President Donald Trump, at his private club in Florida, was briefed on the false alert. White House spokesperson Lindsay Walters said it "was purely a state exercise."

"Clearly, government agencies are not prepared and lack the capacity to deal with emergency situations," he said in a statement.

Hawaii Gov. David Ige apologized for the "pain and confusion" caused by the alert.

The alert caused a tizzy on the islands and across social media.

Others were outraged. Hawaii Sen. Brian Schatz tweeted the false alarm was "totally inexcusable" and was caused by human error.

"There needs to be tough and quick accountability and a fixed process," he wrote.

AGAIN FALSE ALARM. What happened today is totally inexcusable. The whole state was terrified. There needs to be tough and quick accountability and a fixed process.

With the threat of missiles from North Korea in people's minds, the state reintroduced the Cold War-era warning siren tests last month that drew international attention. But there were problems there, too.

Even though the state says nearly 93 per cent of its 386 sirens worked properly, 12 mistakenly played an ambulance siren. At the tourist mecca of Waikiki, the sirens were barely audible, prompting officials to add more sirens there and to reposition ones already in place.

Canadians in Hawaii tell their stories

Canadian Marissa Sciera, on her honeymoon in Maui, described loud alarms coming over the speakers in her hotel alerting her to the threat and advising people not to panic and to stay in their rooms. She and her husband were on the 12th floor of the hotel.

"Terrifying, terrifying. I was shaking — and I was way calmer than my husband. It was horrifying," said the resident of Prince George, B.C.

Canadians with relatives in Hawaii were also affected by the alert.

Rebecca MacLeod's daughter, Jessica, is also in Hawaii on her honeymoon. MacLeod, who lives in Mount Uniacke, N.S., said her daughter texted her when the alert came through.

"She sent three texts and the screenshot," said MacLeod. "It was just, 'Mom, apparently there's a missile on its way to Hawaii, we have to seek shelter. I'm not sure what that means, but I love you and I'll be in touch as soon as I can.'

"I had to make sense of what exactly she was saying. A missile!" said MacLeod.

MacLeod said she started looking for news articles online to find out more information. She eventually saw the tweet from Hawaii congresswoman Tulsi Gabbard that said the alert was a false alarm.

U.S. Pacific Command has detected no ballistic missile threat to Hawaii. Earlier message was sent in error. State of Hawaii will send out a correction message as soon possible. <a href="https://t.co/hqidbV0BWn">pic.twitter.com/hqidbV0BWn</a>

MacLeod said the experience was a terrifying 15 to 20 minutes.

"When an emergency measures organization puts out something that says 'This is not a drill' ...  I'm not going to lie, I was a hot mess. I'm still choked up."

Jordan Hamilton of Saskatoon got a scare over his morning coffee on Saturday. He was vacationing with his family in Hawaii's Kona district.

"We were all just relaxing having coffee and phones started going off with loud alarms," Hamilton said. "You could hear the outdoor alarms as well when you went outside."

Outside their rented Airbnb property, which overlooks the water, they saw people leaving the beaches and running down the streets, and cars flying by at high speeds as everyone rushed to get somewhere safe.