Four Minneapolis officers involved in the arrest of a black man who died in police custody were fired Tuesday, hours after a bystander's video provoked widespread outrage with footage that showed the man pleading that he could not breathe as a white officer knelt on his neck. 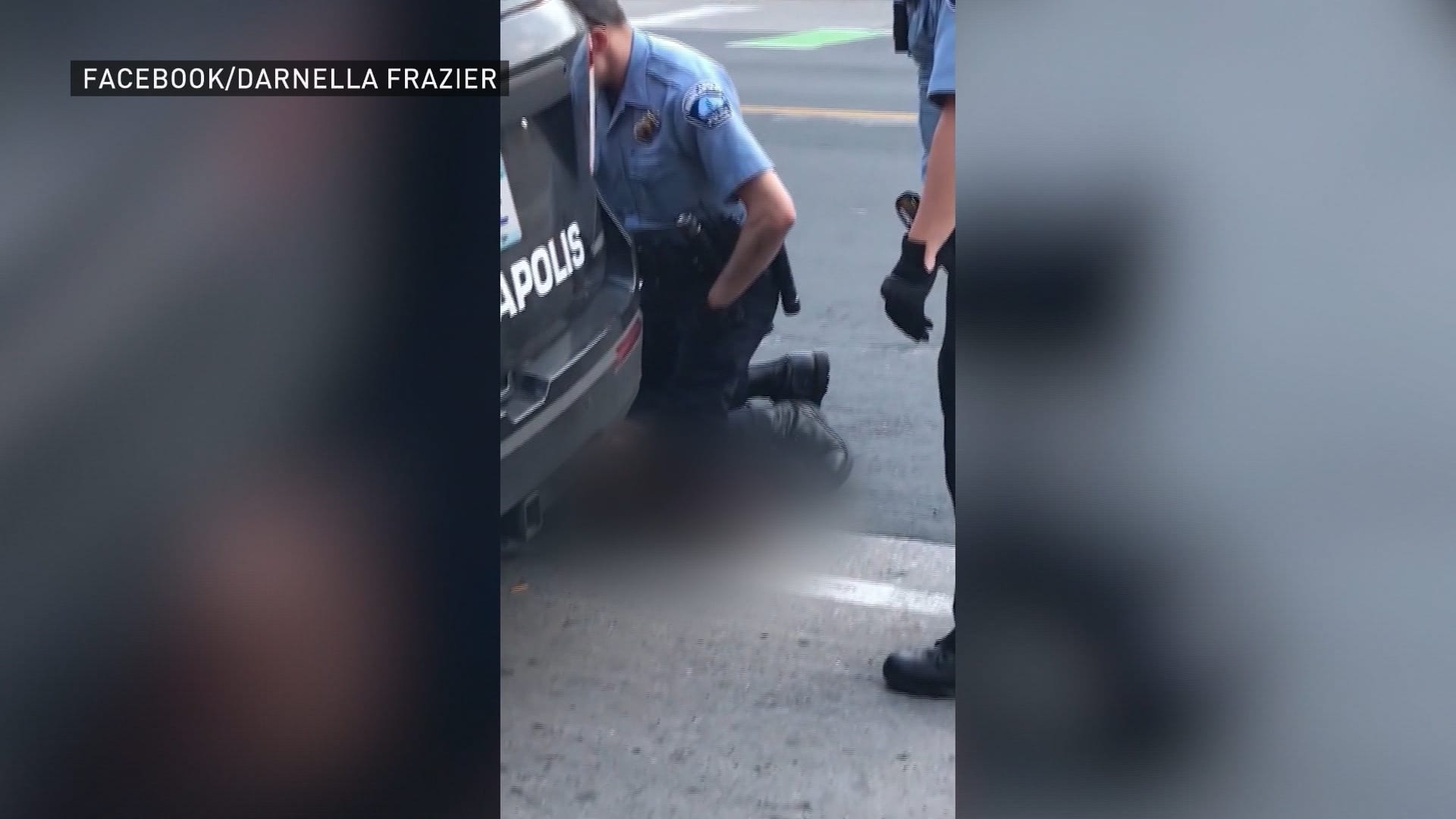 9 months ago
0:52
Social media video shows the officer kneeling on the man's neck as he struggles to breathe and asks for help. 0:52

Four Minneapolis officers involved in the arrest of a black man who died in police custody were fired Tuesday, hours after a bystander's video provoked widespread outrage with footage that showed the man pleading that he could not breathe as a white officer knelt on his neck.

Minneapolis Mayor Jacob Frey tweeted about the firings, saying, "This is the right call."

The man's death Monday night after he struggled with officers was under investigation by the FBI and state law enforcement authorities. It immediately drew comparisons to the case of Eric Garner, an unarmed black man who died in 2014 in New York after he was placed in a chokehold by police and pleaded for his life, saying he could not breathe.

"Being black in America should not be a death sentence. For five minutes, we watched a white officer press his knee into a black man's neck. Five minutes. When you hear someone calling for help, you're supposed to help. This officer failed in the most basic, human sense," Frey posted.

Police said the man matched the description of a suspect in a forgery case at a grocery store, and that he resisted arrest. The unidentified officer ignores his pleas.

Several witnesses had gathered on a nearby sidewalk, some recording the scene on their phones. The bystanders became increasingly agitated as the man pleaded with police. One bystander told officers they need to let him breathe. Another yelled at them to check the man's pulse.

The victim was identified as George Floyd by Ben Crump, a prominent civil rights and personal injury attorney who said he had been hired by Floyd's family.

"We all watched the horrific death of George Floyd on video as witnesses begged the police officer to take him into the police car and get off his neck," Crump said in a statement. "This abusive, excessive and inhumane use of force cost the life of a man who was being detained by the police for questioning about a non-violent charge."

Minneapolis Police Chief Medaria Arradondo said the department would conduct a full internal investigation. Police did not identify the officers, but attorney Tom Kelly confirmed he is representing Derek Chauvin, the officer seen with his knee on Floyd's neck. Kelly declined to comment further.

Police did not immediately respond to a request for Chauvin's service record. News accounts show he was one of six officers who fired their weapons in the 2006 death of Wayne Reyes, whom police said pointed a sawed-off shotgun at officers after stabbing two people. Chauvin also shot and wounded a man in 2008 in a struggle after Chauvin and his partner responded to a reported domestic assault.

Charles McMillian, 60, of Minneapolis, said he saw police trying to get Floyd into the back of the squad car and heard Floyd tell them he was claustrophobic.

After having the officer's knee on his neck, McMillian said, the man started calling his mother's name, "and then he died."

"It's sad because it didn't have to happen," McMillian said.

Floyd had worked security for five years at a restaurant called Conga Latin Bistro and rented a home from the restaurant owner, Jovanni Thunstrom.

He was "a good friend, person and a good tenant," the restaurateur told the Star Tribune. "He was family. His co-workers and friends loved him."

Experts on police use of force told The Associated Press that the officer clearly restrained the man too long. They noted the man was under control and no longer fighting.

Andrew Scott, a former Boca Raton, Fla., police chief who now testifies as an expert witness in use-of-force cases, called Floyd's death "a combination of not being trained properly or disregarding their training."

"He couldn't move. He was telling them he couldn't breathe, and they ignored him," Scott said. "I can't even describe it. It was difficult to watch."

The New York City officer in the Garner case said he was using a legal manoeuvre called "the seatbelt" to bring down Garner, whom police said had been resisting arrest. But the medical examiner referred to it as a chokehold in the autopsy report and said it contributed to his death. Chokehold manoeuvres are banned under New York police policy.

A grand jury later decided against indicting the officers involved in Garner's death, sparking protests around the country.

In Minneapolis, kneeling on a suspect's neck is allowed under the department's use-of-force policy for officers who have received training in how to compress a neck without applying direct pressure to the airway. It is considered a "non-deadly force option," according to the department's policy handbook.

A chokehold is considered a deadly force option and involves someone obstructing the airway. According to the department's use-of-force policy, officers are to use only an amount of force necessary that would be objectively reasonable.

The police union asked the public to wait for the investigation to take its course and not to "rush to judgment and immediately condemn our officers." The Hennepin County Attorney's Office, which would handle any prosecution of police on state charges, said in a statement that it was "shocked and saddened" by the video and pledged to handle the case fairly. The U.S. Attorney's Office in Minnesota declined comment.

All body camera footage in the Minneapolis case was turned over to the Minnesota Bureau of Criminal Apprehension, and the agency has asked to speak with anyone who saw the arrest or recorded video.

The FBI is conducting a separate federal civil rights investigation at the request of Minneapolis police, the BCA said. Messages left with the FBI were not immediately returned.