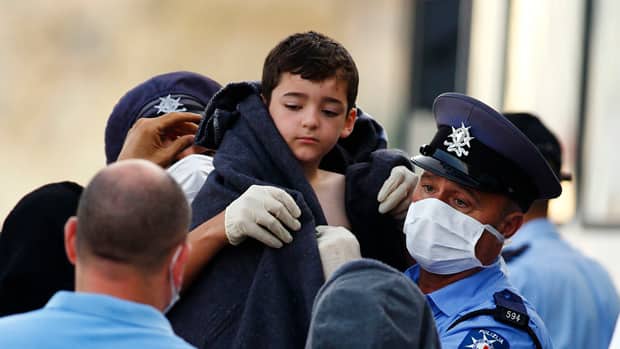 7 years agoVideo
2:28
Another boat carrying migrants from Africa has capsized in the Mediterranean, killing more than 30 people. 2:28

At least 34 people drowned in Maltese waters south of the Italian island of Lampedusa when a boat packed with hundreds of Syrians and Palestinians capsized on Friday, the same day another 12 migrants died in a shipwreck off of Egypt.

Those tragedies came just eight days after at least 339 Eritreans died when their boat sank within sight of Lampedusa, in one of the worst verified migrant sea tragedies on the Mediterranean.

Facing unrest and persecution in Africa and the Middle East, many migrants risk the often perilous journey to Lampedusa, a gateway to Europe just 113 kilometres from Africa, in rickety boats procured by people smugglers who charge more than $2,200 US.

Most are asylum seekers, fleeing civil war in Syria or repression and mandatory conscription in Eritrea, unlike the waves of economic migrants a decade ago.

The UN High Commissioner for Refugees Antonio Guterres expressed concern that Syrians fleeing conflict have sought to reach Europe by such a perilous route, calling it `'inhumane."

"They escaped bullets and bombs only to perish before they could ever claim asylum," he said, adding that there had been reports that the vessel had been fired on shortly after departing Zwara, Libya.

UN Secretary General Ban-Ki-moon called for action to prevent future tragedies "that places the vulnerability and human rights of migrants at the center," while Pope Francis lamented that `'too often we are blinded by our comfortable lives, and refuse to see those dying at our doorstep."

The boat in Maltese waters capsized Friday afternoon about 105 kilometres southeast of Lampedusa, in waters where Malta has search and rescue responsibilities.

A joint Italian-Malta operation rescued nearly 200 people after the Italian Coast Guard received a distress call via satellite phone from the boat and a Maltese aircraft sighted the capsized boat with numerous people in the water. At least 34 people died, while 146 survivors were brought to Malta.

The victims included a 3-year-old boy whose body was found floating in the sea more than a day after the boat capsized, said Silvio Scerri, the chief of staff at Malta's Home Affairs Ministry.

The UN refugee agency said survivors claim up to 400 people were on board. Search operations were still under way.

Other survivors, 56 in all, who were not in immediate need of medical attention were heading to Sicily on board an Italian frigate.

Italian Naval spokesman Cmdr. Marco Maccaroni said also rescued some 180 people from other boats in the same area overnight — another indication of the relentless flows of migrants braving the Mediterranean.

'The two accidents in such a short period have raised the attention of the public, but the tensions have been going on all summer.- Cmdr. Marco Maccaroni, Italian Navy

`'The flows have never stopped, especially over the summer months," Maccaroni said. "'The two accidents in such a short period have raised the attention of the public, but the tensions have been going on all summer."

At least 70,000 Syrians are registered in Egypt as refugees. Many, including thousands of Palestinians who also fled the war in Syria, are not registered and use the country as a stopover before making the perilous sea trip to Europe.

`'Urgent measures must be adopted to open humanitarian corridors. There is no time to lose," said Francesco Rocca, the president of the Italian Red Cross, emphasizing that people escaping war and repression must be given a safe route of escape. `'In this way it would hit also the traffickers and we could stop this ceaseless massacre."

`'Behind these tragedies, as the dramatic instability of African countries increases, there are human traffickers who are enriching themselves on the backs of people who are fleeing war and hunger," said the Congolese-borne Kyenge.

Europe, an Italian observatory that tracks migrant deaths reported by the media, says about 6,450 people died in the Strait of Sicily where Lampedusa is located between 1994 and 2012. Often ships disappear at sea, leaving no way to verify the deaths.