A man and a woman suspected of carrying out a mass shooting at a social services centre in San Bernardino, Calif., have been killed following a gun battle with police. The attack left at least 14 people dead and 17 injured.

Attackers struck in a conference area of the building, with 14 killed, 17 injured

A man and a woman suspected of carrying out a shooting at a social services facility in San Bernardino, Calif., have been killed after a gun battle with police. The shooting left at least 14 people dead and 17 injured.

Police said the suspects entered the Inland Regional Center and opened fire shortly after 11 a.m. PT on Wednesday and fled the scene in a black SUV. A possible explosive device was later found at the facility.

Hours after the shooting, a tip led police to a residence in the nearby community of Redlands, Calif., where they observed a dark SUV leaving the area.

A police pursuit ensued, and officers engaged in gunfire with the two occupants of the vehicle that left the black SUV riddled with bullets and the two suspects dead.

San Bernardino police Chief Jarrod Burguan said a man and woman were found inside the SUV, dressed in "assault-style clothing" and armed with assault rifles and handguns.

One officer suffered non-life-threatening injuries in the shootout.

Farhan Khan, who is married to Farook's sister, told reporters he last spoke to his brother-in-law about a week ago. He said he was in shock and had "absolutely no idea why he would do this."

A third person was seen running away after the gunfire in the shootout, but by the end of the day authorities had seemed to clear that person of involvement, indicating they believed the two suspects publicly identified carried out the attack.

At a news conference earlier Wednesday, Burguan said the attackers "came prepared to do what they did, as if they were on a mission."

He said police don't as yet have a possible motive.

The Inland Regional Center serves people with disabilities, helping them find jobs, housing and transportation, along with a range of other services.

But the attackers opened fire in a conference area that the San Bernardino County department of public health had rented out for a holiday banquet, said Marybeth Feild, president and CEO of the facility.

Melinda Revas was on the third floor of one of the facility's buildings, and described the chaotic scene to CBC's Kim Brunhuber.

Revas said she and dozens of others barricaded themselves in a conference room for at least 20 minutes, propping furniture against the doors.

"I had no idea if I was going to get out alive.… and I just stood there and said my prayer and comforted other staff," Revas said.

"As we left the building, we saw people laying in the streets, they were in the stretchers, the paramedic was assisting them, I saw pieces of clothing, people's shoes.… It was a pretty horrific situation today. Pretty horrific."

Police said the "vast majority" of casualties were contained to one area of the building. Because an explosive device was found at the facility, police said it might take a bomb squad "several hours" to clear that scene.

Soon after the attack, several law enforcement agencies converged on the scene to search for the suspects, and triage units were set up in the area.

Some people were seen being wheeled away on gurneys. Others walked quickly from a building with their hands in the air and were searched by officers before being reunited with loved ones.

Elsa Torres tells me her daughter called from building. "I could hear boom boom boom, so she said I love you mama." <a href="https://t.co/gUF6kIovdZ">pic.twitter.com/gUF6kIovdZ</a>

Agents for the FBI and the U.S. Bureau of Alcohol, Tobacco, Firearms and Explosives were dispatched to the scene to assist local law enforcement in the investigation, representatives for the two agencies said.

At the evening news conference, David Bowdich, an assistant director with the FBI Los Angeles, said more agents were being brought in to help with the investigation.

Bowdich said investigators would carefully go through the Redlands residence, which was located about three kilometres from the initial shooting scene.

"This is truly a tragedy in our country and we'll continue to apply all the resources necessary.… to chase down every lead to solve this case," he said.

Chief Burguan also said police were "confident" that that neighbourhood where the police pursuit took place was now secure.

U.S. President Barack Obama was in the middle of an interview with CBS News when the shooting happened. He told CBS News co-host Norah O'Donnell that while the motives behind the attack are not yet clear, what is certain is that the pattern of mass shootings in the U.S. "has no parallel anywhere else in the world." 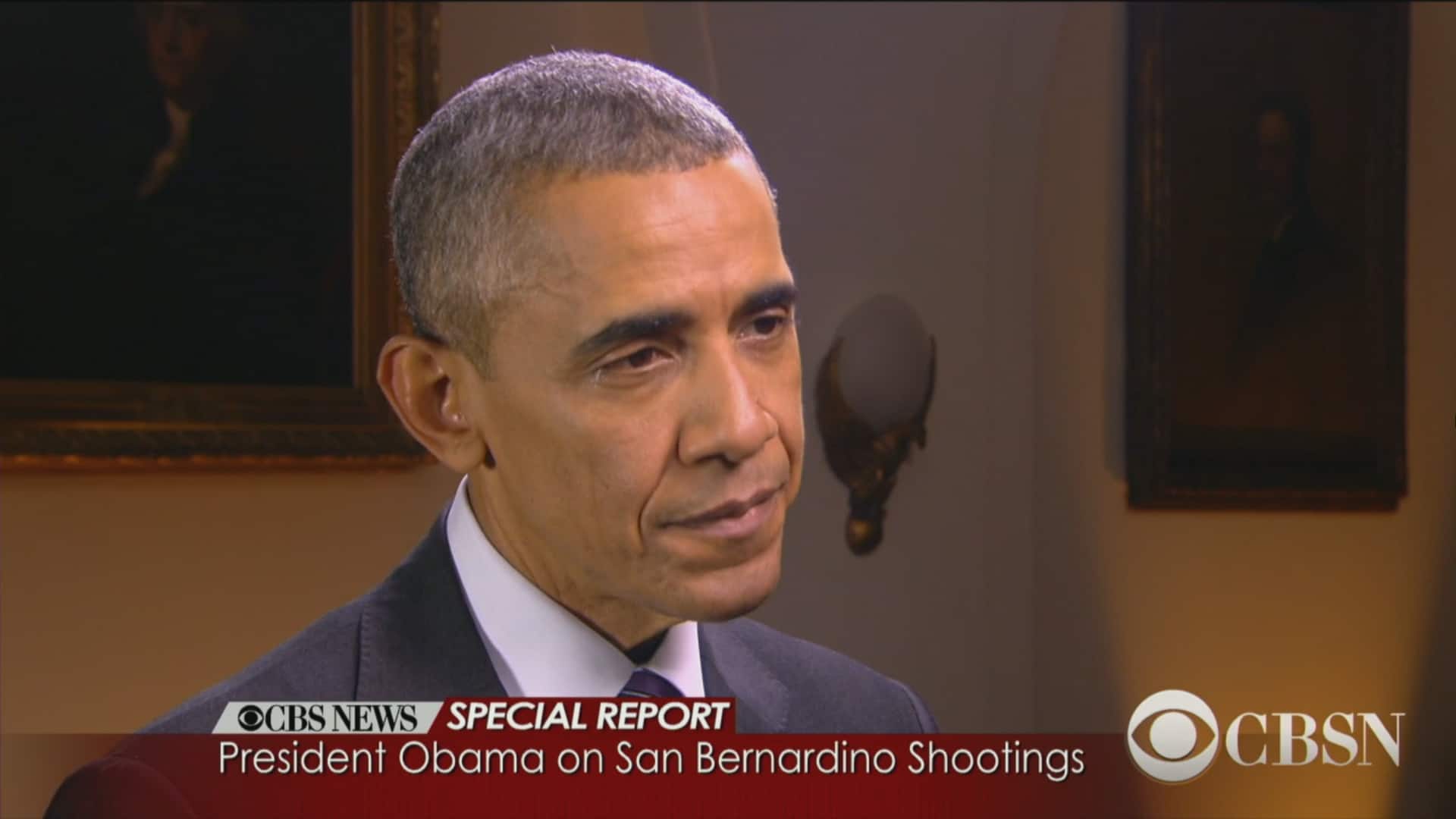 "There's some steps we could take, not to eliminate every one of these mass shootings, but to improve the odds that they don't happen as frequently, common sense gun safety laws, stronger background checks," he said.

"For those who are concerned about terrorism, you know, some may be aware of the fact that we have a no-fly list where people can't get on planes, but those same people who we don't allow to fly could go into a store right now in the United States and buy a firearm, and there's nothing that we can do to stop them."

The attack was the deadliest mass shooting in the United States since December 2012, when a lone gunman killed 26 children and adults at Sandy Hook Elementary School in Newtown, Conn.

Terry Petit said his daughter works at the centre, and he got a text from her saying she was hiding in the building after hearing gunshots. Petit choked back tears as he read the texts for reporters. He said she wrote: "People shot. In the office waiting for cops. Pray for us. I am locked in an office."

Marcos Aguilera's wife was in the building when the gunfire erupted. He said a shooter entered the building next to his wife's office and opened fire.

"They locked themselves in her office. They seen bodies on the floor," Aguilera told KABC-TV, adding that his wife was able to get out of the building unharmed.

As the manhunt went on, stores, office buildings and at least one school were locked down in the city of 214,000 people, which is located about 100 kilometres east of Los Angeles.

San Bernardino Mayor Carey Davis said information about a vigil for the victims would be forthcoming.

"It's our intent to try to make sure that the community knows that we, as a city, will support and do all we can for the victims of this violent crime."