As Marie Yovanovitch, a witness in the impeachment inquiry into U.S. President Donald Trump, was being questioned by lawmakers in the second day of televised hearings in Washington, D.C., and denigrated on Twitter by the president, her former boss was commending her work in Canada.

As a star witness in the impeachment inquiry into U.S. President Donald Trump was being questioned by lawmakers in the second day of televised hearings in Washington, D.C., and denigrated on Twitter by the president, her former boss was commending her work in Canada.

Marie Yovanovitch had just begun testifying about her ouster as the U.S. ambassador to Ukraine, when Trump started commenting on the proceedings on Twitter.

"Everywhere Marie Yovanovitch went turned bad," he tweeted. "She started off in Somalia, how did that go?"

Yovanovitch worked in Somalia early in her more than three-decade career in the U.S. State Department. That career included two years in Ottawa as the political-military officer at the U.S. embassy from 1996 to 1998.

Everywhere Marie Yovanovitch went turned bad. She started off in Somalia, how did that go? Then fast forward to Ukraine, where the new Ukrainian President spoke unfavorably about her in my second phone call with him. It is a U.S. President’s absolute right to appoint ambassadors.

It was a homecoming of sorts for Yovanovitch. She was born in Canada, in Montreal, to parents whose families, according to her earlier testimony, had fled the Soviet Union and Nazi Germany. She moved to the U.S. as a young child.

A former U.S. ambassador to Canada, Gordon Giffin, recalled her as Masha, the Russian short form of her first name and what her embassy colleagues called her when they worked with her.

Yovanovitch was a junior officer early in Giffin's stint as Bill Clinton's ambassador to Canada in the late 1990s.

"She was a very energetic and intelligent officer — someone who exemplified the enthusiasm and dynamism of the career foreign service," Giffin recalled Friday. 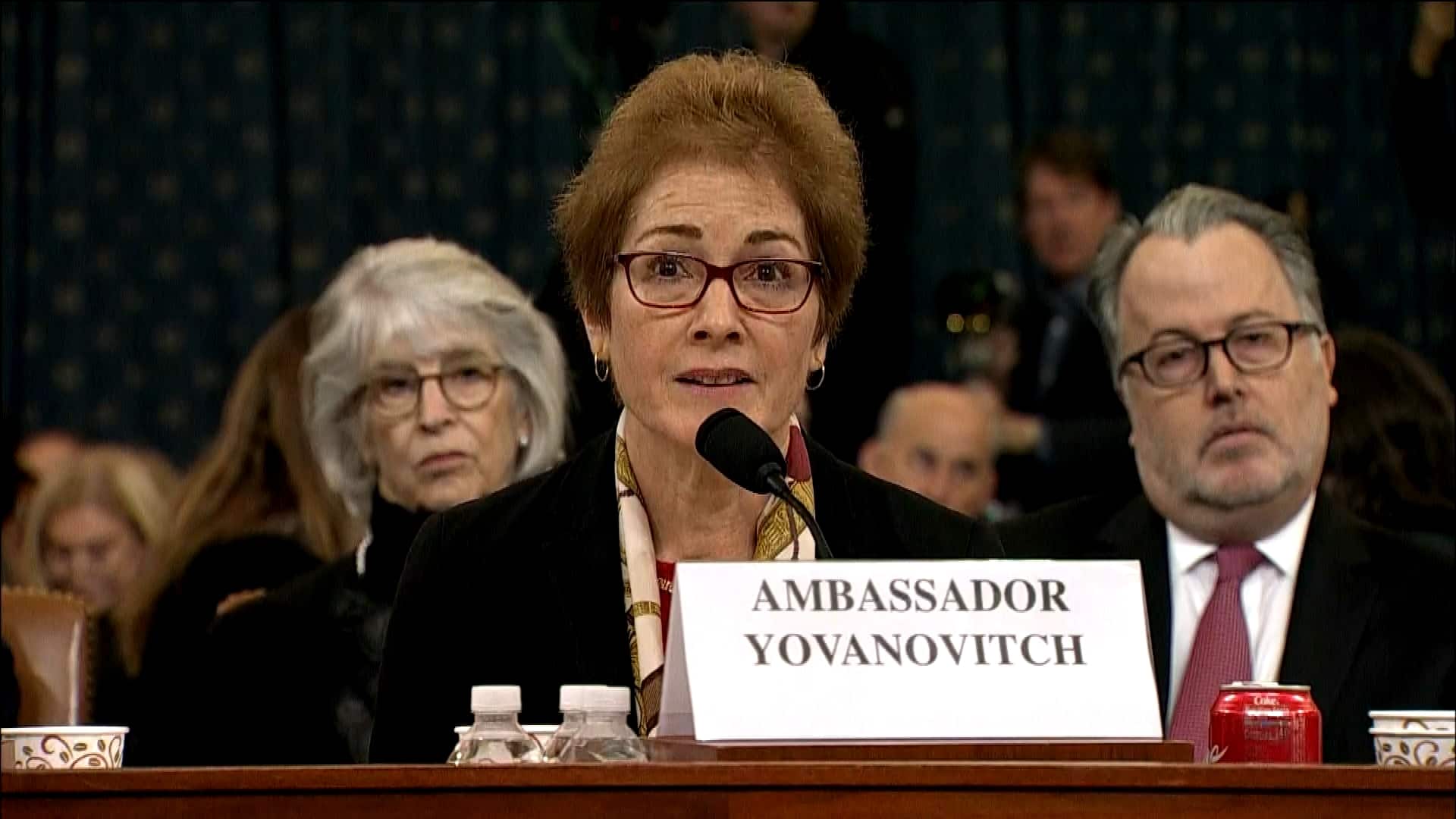 A student in line outside the hearing room on Capitol Hill Friday hoping to watch the hearing live called her a textbook professional — literally.

Hunter Congdon, an international affairs student at Georgetown University, said he has a decade-old textbook about diplomacy, Inside a U.S. Embassy, in which she's cited as an example of a model ambassador.

"The person who is featured as the example ambassador abroad is Marie Yovonavitch," Congdon said.

"So, she is considered to be the prototypical U.S. ambassador. So, it is really interesting to see that she is the one being questioned."

After being pulled out of Ukraine this spring, Yovanovitch is now the senior State Department fellow at Georgetown's Institute for the Study of Diplomacy.

Lawyer Steve Castor, who was doing the bulk of the questioning for the Republicans Friday, suggested the prestigious Georgetown fellowship undercut the idea that she was ousted for corrupt motives.

Castor noted that Yovanovitch was retained within the State Department and sent to Georgetown. In Ukraine, she was replaced by someone who had strong credentials and shared her commitment to the country: William Taylor, recently appointed in a temporary role as chargé d'affaires.

Yovanovitch replied that the U.S. still has no official ambassador in Kyiv.

One of the Republican congressmen who questioned Yovanovitch praised her record of service and her fortitude.

"You're tough as nails. You're smart as hell," said Will Hurd, a former CIA officer who is not running for re-election in the 2020 election. "You're an honour to this country."

She gave an account of her removal as ambassador, which she said came after she butted heads with allegedly corrupt Ukrainian officials helping Trump execute a parallel policy on Ukraine.

The Democrats' central allegation in their impeachment inquiry into Trump's dealings with Ukraine is that he delayed U.S. military aid — approved by Congress — to pressure the country's president to launch investigations into Democratic presidential candidate Joe Biden and his son Hunter's role at Burisma, a Ukrainian energy company, as well discredited allegations that Ukraine had a hand in  2016 U.S. election interference.

She was asked how she felt earlier this year when Trump's son Donald Jr., commenting on an article about calls to remove her, tweeted that the U.S. needs "less of these jokers as ambassadors."

"How is it that foreign corrupt interests could manipulate our government? … Our Ukraine policy has been thrown into disarray, and shady interests the world over have learned how little it takes to remove an American ambassador who does not give them what they want."

WATCH | Yovanovitch comments on Trump's reference to her as 'bad news' in phone call to Ukrainian President Volodymyr Zelensky: 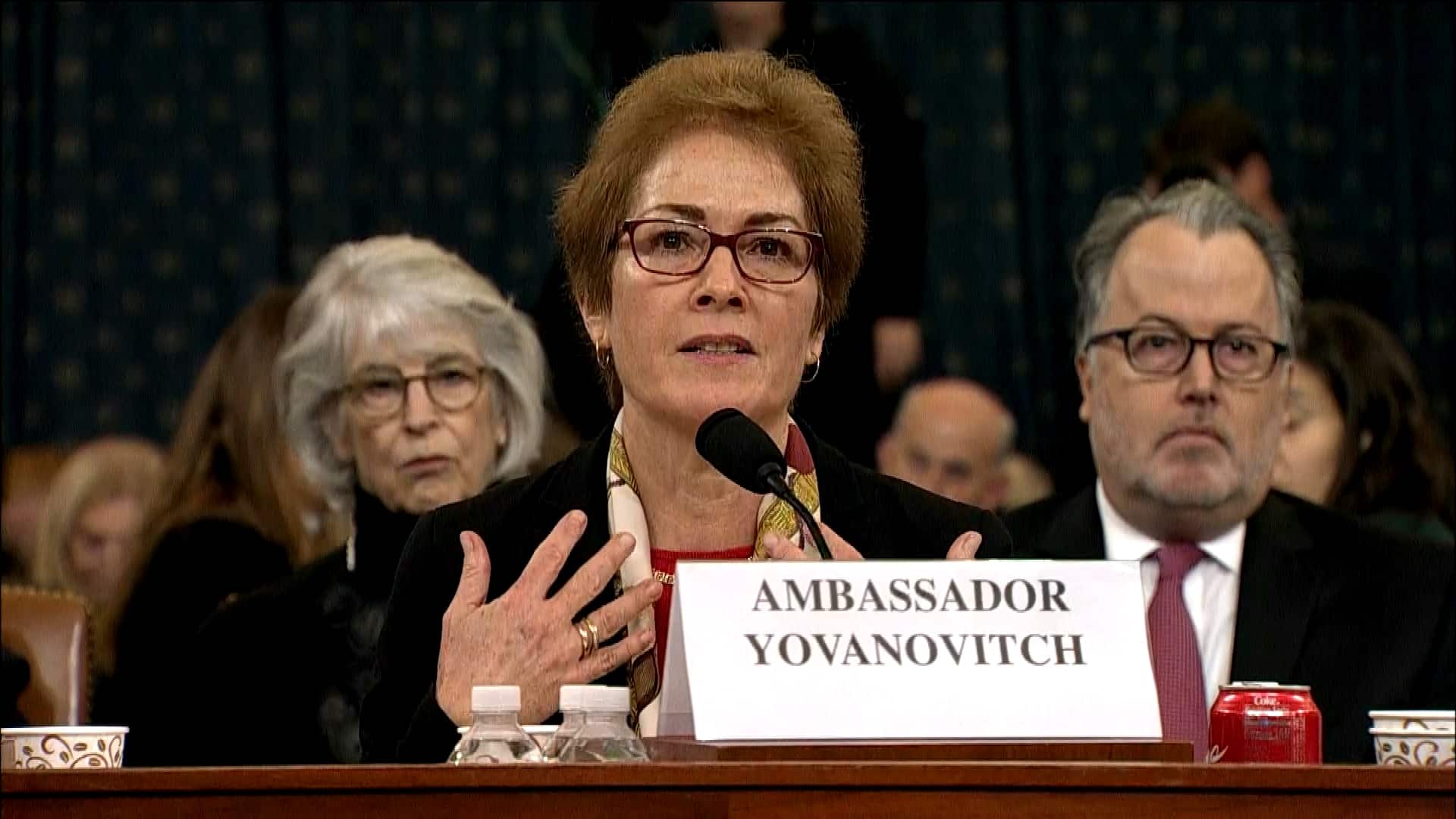 Yovanovitch 'shocked and devastated' to be called 'bad news' by Trump

1 year ago
1:14
Former ambassador to Ukraine Yovanovitch testifies she had physical reaction to being called 'bad news' by Trump: it was a 'terrible moment.' 1:14

With files from Sylvia Thomson