Marine Le Pen's loss dashed her hopes that she would join populist wave of Trump, Brexit

Macron, who had never run for office before, celebrated with thousands of jubilant, flag-waving supporters outside the Louvre Museum in Paris on Sunday night.

The European anthem Ode to Joy played as he strode out to address the swelling crowd.

"France has won!" he said. "Everyone said it was impossible. But they do not know France!"

Le Pen, his opponent in the runoff, quickly called the 39-year-old Macron to concede after voters rejected her "French-first" nationalism by a large margin. Le Pen's performance punctured her hopes that the populist wave that swept Donald Trump into the White House and led Britain to vote to leave the EU would also carry her to France's presidential Élysée Palace.

Macron told the Louvre crowd that the Le Pen vote was one of "anger, disarray."

"I will do everything in the five years to come so there is no more reason to vote for the extremes," he said.

"I know the divisions in our nation that led some to extreme votes. I respect them," he declared, unsmiling. "I know the anger, the anxiety, the doubts that a large number of you also expressed. It is my responsibility to hear them." 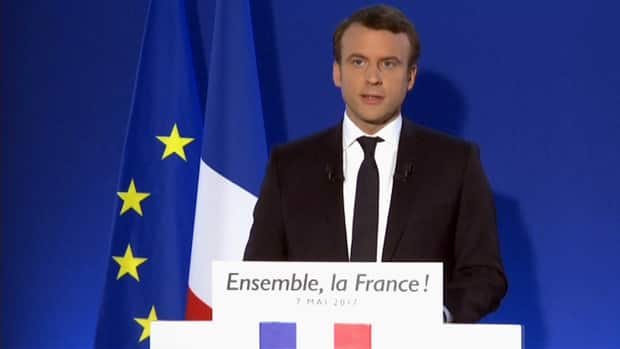 The result wasn't close: With about 90 percent of votes counted, Macron had 64 percent support. Le Pen had 36 percent — about double what Jean-Marie Le Pen, her father and co-founder of their National Front party, achieved at the same stage in the 2002 presidential election.

Macron's victory strengthens France's place as a central pillar of the European Union, and marked the third time in six months -- following elections in Austria and the Netherlands -- that European voters shot down far-right populists who wanted to restore borders across Europe. The election of a French president who champions European unity could also strengthen the EU's hand in its complex divorce proceedings with Britain.

Parisians lined the streets outside Macron's campaign headquarters to see his motorcade whisk him away to the Louvre party. His wife, Brigitte, joined him on stage after his address.

Macron said he understood that some voters backed him reluctantly, simply to keep out Le Pen and her National Front party, which has a long history of anti-Semitism and racism.

"I know that this is not a blank cheque," he said. "I know about our disagreements. I will respect them."

Prime Minister Justin Trudeau has spoken with Macron to congratulate him on his election. The Prime Minister's Office said the two leaders reaffirmed the "rich and diverse bilateral relationship that exists between Canada and France."

Trudeau said earlier in a statement that he looks forward to working closely with Macron in the years ahead on issues that include implementing the Canada-European Union Comprehensive Economic and Trade Agreement.

Trudeau said he hopes he and Macron can work together on a "progressive agenda" to promote international security, increase collaboration in science and technology, and create good, middle class jobs on both sides of the Atlantic.

Other congratulatory messages from abroad included a tweet from Trump about Macron's "big win" and a warning from Germany's foreign minister, Sigmar Gabriel, that "If he fails, in five years Mrs. Le Pen will be president and the European project will go to the dogs."

Russian President Vladimir Putin sent Macron a telegram to congratulate him and told him Russia was ready for constructive work on bilateral and global issues, the Kremlin said on Monday.

"The citizens of France have trusted you with leading the country at a difficult time for Europe and the whole world community. The growth in threats of terrorism and militant extremism is accompanied by an escalation of local conflicts and the destabilization of whole regions," the telegram to Macron read, according to the Kremlin.

"In these conditions it is especially important to overcome mutual mistrust and unite efforts to ensure international stability and security," Putin told Macron.

After the most closely watched and unpredictable French presidential campaign in recent memory, many voters rejected the runoff choices altogether — casting blank or spoiled ballots in record numbers Sunday. Police sprayed tear gas and detained almost 150 protesters in Paris overnight. The demonstrators were protesting both against Macron and Le Pen

Macron now becomes not only France's youngest-ever president, but also one of its most unlikely. Until now, modern France had been governed either by the Socialists or the Conservatives — but both Macron and Le Pen upended that right-left political tradition.

"France has sent an incredible message to itself, to Europe and the world," said Macron ally Francois Bayrou, among Macron's possible choices for prime minister.

Unknown to voters before his turbulent 2014-16 tenure as France's pro-business economy minister, Macron took a giant gamble by quitting Socialist President François Hollande's government to run as an independent.

"I'm so happy, it feels so good! I lived the election of Donald Trump in New York, and now finally, after Brexit, after Trump, populism has been beaten in France," Macron supporter Pierre-Yves Colinet said at the Louvre party. "Today, I'm proud to be French."

Despite her loss, Le Pen's advancement to the runoff for the first time marked a breakthrough for the 48-year-old and underscored a growing acceptance of her anti-immigration, France-first nationalism.

Le Pen immediately turned her focus to France's upcoming legislative elections in June, where Macron will need a working majority to govern effectively. Le Pen said her "historic and massive" score turned her party into "the leading opposition force against the new president's plans."

"I call on all patriots to join us," Le Pen said. "France will need you more than ever in the months ahead."

Le Pen said she won 11 million votes, which would be her party's highest-ever electoral score.

Macron and Le Pen offered polar-opposite visions: Le Pen's closed borders against Macron's open ones; his commitment to free trade ran against her proposals to protect the French from global economic competition and immigration. Her desire to free France from the EU and the shared euro currency contrasted with his argument that both are essential for the future of Europe's third-largest economy.

Macron also got lucky in the campaign.  One of his most dangerous opponents, conservative former Prime Minister François Fillon, was hobbled by allegations that his family benefited from cushy taxpayer-funded jobs for years. Fillion is facing charges in the case.

On the left, the Socialist Party imploded, its candidate abandoned by voters who wanted to punish Hollande, France's most unpopular president since the Second World War. Hollande himself decided not to run again.

Macron takes charge of a nation that, when Britain leaves the EU in 2019, will become the EU's only member with nuclear weapons and a permanent seat on the UN Security Council.