British Prime Minister Theresa May is condemning the "sick and depraved terrorist attack" in London that left at least three people dead and 40 injured.

Authorities believe they know attacker's identity, would not reveal it while investigation ongoing 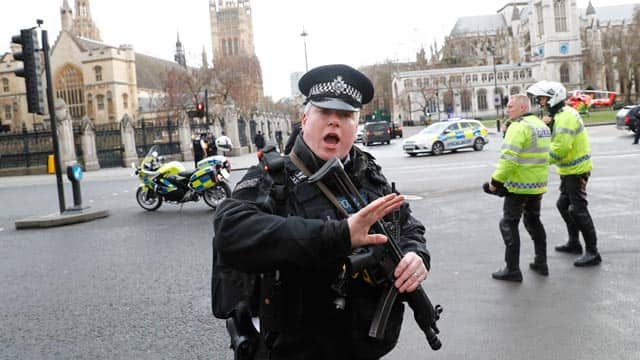 4 years ago
3:41
A knife-wielding man plowed a car into pedestrians on London's Westminster Bridge before stabbing a police officer to death inside the gates of Parliament. 3:41

A knife-wielding man went on a deadly rampage in the heart of Britain's seat of power Wednesday, plowing a car into pedestrians on London's Westminster Bridge before stabbing a police officer to death inside the gates of Parliament.

Four people were killed, including the assailant, and 40 others were injured in what Prime Minister Theresa May condemned as a "sick and depraved terrorist attack."

Lawmakers, lords, staff and visitors were locked down after the man was shot by police within the perimeter of Parliament, just metres from entrances to the building itself and in the shadow of the iconic Big Ben clock tower. He died, as did two pedestrians on the bridge, and the police officer.

A doctor who treated the wounded from the bridge said some had "catastrophic" injuries. Three police officers, several French teenagers on a school trip, two Romanian tourists and five South Korean visitors were among the injured.

Police said they were treating the attack as terrorism. There was no immediate claim of responsibility.

Metropolitan Police counterterrorism chief Mark Rowley said police believed there was only one attacker, "but it would be foolish to be overconfident early on." He said an unarmed policeman, two civilians and the attacker died.

He identified the police officer who died as Keith Palmer, 48. 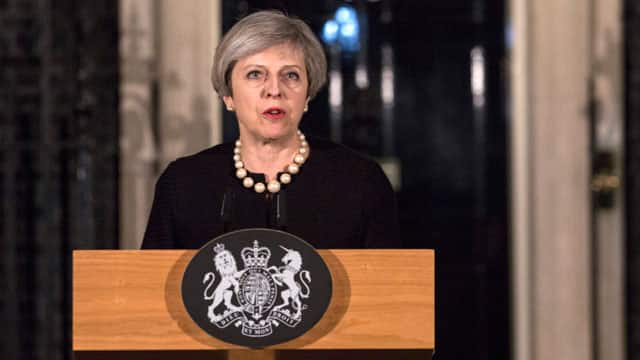 4 years ago
4:11
Theresa May condemns Parliament attack in London and praises security services for their work 4:11

Islamic extremism was suspected in the attack, Rowley said, adding that authorities believe they know the assailant's identity but would not reveal it while the investigation was ongoing.

The threat level for international terrorism in the U.K. was already listed at severe, meaning an attack was "highly likely."

Speaking outside 10 Downing St. after chairing a meeting of government's emergency committee, COBRA, May said that level would not change. She said attempts to defeat British values of democracy and freedom through terrorism would fail.

"Tomorrow morning, Parliament will meet as normal," she said. Londoners and visitors "will all move forward together, never giving in to terror and never allowing the voices of hate and evil to drive us apart."

London has been a target many times over past decades. Just this weekend, hundreds of armed police took part in an exercise simulating a "marauding" terrorist attack on the River Thames.

Wednesday was the anniversary of suicide bombings in the Brussels airport and subway that killed 32 people last year, and the latest events echoed recent vehicle attacks in Berlin and Nice, France.

In the House of Commons, legislators were holding a series of votes on pensions when deputy Speaker Lindsay Hoyle announced that the sitting was being suspended and told lawmakers not to leave.

Parliament was locked down for several hours, and the adjoining Westminster subway station was shuttered.

Conservative lawmaker Tobias Ellwood, whose brother was killed in 2002 in the Bali bombing, performed first aid on the wounded police officer, who later died. About 10 yards away lay the assailant.

"I tried to stem the flow of blood and give mouth to mouth while waiting for the medics to arrive but I think he had lost too much blood," Ellwood said. "He had multiple wounds, under the arm and in the back."

'One man was bleeding from his head'

The attack began early Wednesday afternoon as a driver in a gray vehicle slammed into pedestrians on the bridge linking Parliament to the south bank of the River Thames.

Former Polish foreign minister Radek Sikorski was in a car crossing the bridge when he heard "something like a car hitting metal sheet" and then saw people lying on the pavement.

"I saw one person who gave no signs of life. One man was bleeding from his head. I saw five people who were at least seriously injured," Sikorski told Poland's TVN24. 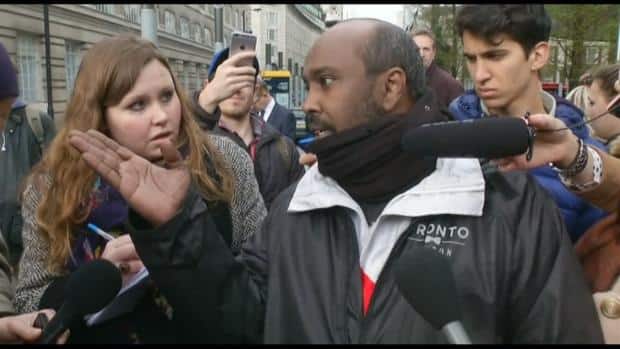 Ambulances arrived within minutes to treat people who lay scattered along the length of the bridge. One bloodied woman lay surrounded by a scattering of postcards.

Police said one injured woman was pulled from the river.

The car crashed into railings on the north side of the bridge, less than 200 metres from the entrance to Parliament. As people scattered in panic, witnesses saw a man holding a knife run toward the building.

"The whole crowd just surged around the corner by the gates just opposite Big Ben," said witness Rick Longley. "A guy came past my right shoulder with a big knife and just started plunging it into the policeman. I have never seen anything like that. I just can't believe what I just saw."

The attacker managed to get past a gate into Parliament's fenced-in New Palace Yard, a cobbled courtyard in the shadow of the Big Ben clock tower.

Daily Mail journalist Quentin Letts said a man in black attacked the police officer before being shot two or three times as he tried to storm into the building. 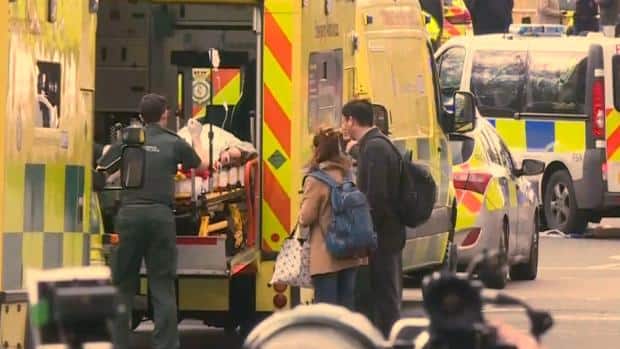 "As this attacker was running towards the entrance two plain-clothed guys with guns shouted at him what sounded like a warning, he ignored it and they shot two or three times and he fell," Letts told the BBC.

The attacker fell to the cobbles just yards from the entrance to 1,000-year-old Westminster Hall, the oldest part of the parliamentary complex, busy with visitors and school groups. Beyond that, a corridor leads to the building's Central Lobby, flanked by House of Commons and House of Lords chambers.

The prime minister was among lawmakers near the Commons at the time of the attack, and was quickly ushered away by security officers and driven back to Downing Street.

To get that far, the attacker would have had to evade the armed officers who patrol the Parliament complex in pairs, as well as Parliament's own security staff, who don't carry guns.

The attack unfolded near some of the city's most famous tourist sites, including the London Eye, a large Ferris wheel with pods that overlook the capital. It was halted after the attack, stranding visitors in the pods, with an aerial view of the attack scene. 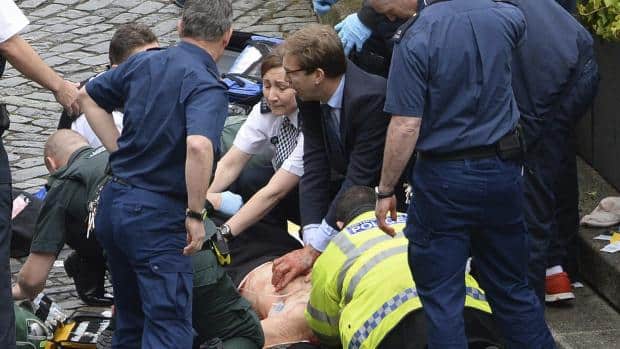 Dr. Colleen Anderson of St. Thomas' Hospital said some of the wounded had "catastrophic" injuries.

Londoners will never be cowed by terrorism. <a href="https://t.co/SidIuIztvu">pic.twitter.com/SidIuIztvu</a>

London has often been a target, from IRA campaigns in the 1970s and 80s to more recent Islamist plots.

On July 7, 2005, four al-Qaeda-inspired British bombers blew themselves up on three subway trains and a bus in London, killing 52 people.

British security forces say they have thwarted some 13 terror plots over the past four years, but in recent years the U.K. has largely been spared major international attacks such as the ones seen in Belgium and France.

The international community reacted to the London attack, with leaders from around the world expressing grief, solidarity and condolences.

"We are all saddened to hear about the incident in London, and I express my deepest condolences to the victims of this cowardly attack," Prime Minister Justin Trudeau said in the House of Commons on Wednesday.

"The scene is all too familiar to members of this House who were here 2½ years ago," he added, referring to 2014 Parliament shooting in Ottawa.

Our thoughts are with the victims of today’s attack in London &amp; their families. Canadians remain united with the people of the UK.

German Chancellor Angela Merkel in a statement said she learned "with sorrow" of Wednesday's incident and her thoughts were "with our British friends and all of the people of London," in particular those who were injured.

French President François Hollande told reporters outside Paris, "We are all concerned with terrorism.

"France, which has been struck so hard lately, knows what the British people are suffering today."