London Mayor Boris Johnson said on Sunday he backed leaving the European Union, dealing a blow to Prime Minister David Cameron by giving the "out" campaign a de facto leader who is one of the most charismatic politicians in British politics.

London Mayor Boris Johnson said on Sunday he backed leaving the European Union, dealing a blow to Prime Minister David Cameron by giving the "out" campaign a de facto leader who is one of the most charismatic politicians in British politics.

Forty-three years after Britain joined the EU's predecessor, Cameron announced a June 23 referendum on Saturday after clinching a deal from 27 other leaders to give Britain what he said was a special status.

But Johnson, one of Britain's most high-profile politicians, remained silent on Cameron's deal for nearly two days before making his dramatic announcement on the steps of his north London home.

"I will be advocating Vote Leave ... because I want a better deal for the people of this country to save them money and to take back control," Johnson told a crowd of reporters.

The move deepened a divide in Cameron's ruling Conservative Party, and betting odds against a British exit shortened to 2/1, a 33 per cent chance, from 12/5, a 29 per cent chance.

So far, no country has ever left the EU, and several European countries outside the bloc are still working to reform their economies and governance systems so they can join.

Johnson, a political showman whose buffoonish and eccentric exterior masks fierce ambition to succeed Cameron, dismissed questions about whether the announcement was a bid for the future leadership of the Conservative Party. 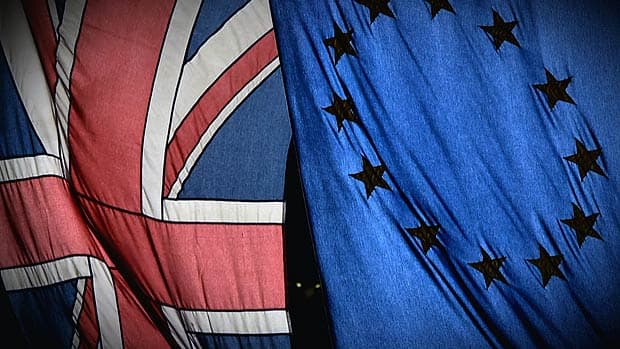 U.K. referendum on staying in the EU to be held June 23

5 years ago
2:39
Prime Minister David Cameron vowed Saturday to lead the charge to keep Britain part of the EU 2:39

Johnson said the decision to oppose Cameron had been "agonizingly difficult" and praised the PM's renegotiating effort, but said ultimately the reforms agreed in Brussels had fallen far short of meaningful change on issues like sovereignty.

"I don't see how, having worried about this issue for quite so long and having fulminated for quite so long about the lack of democracy in the EU, I can then pass up what I think will be the only chance any of us have in our lifetimes to put an alternative point of view," he said.

Cameron earlier in the day used a TV appearance to try to convince Johnson to join the "stay" campaign. The PM cited emerging challenges from Russia and the rise of extremist groups in the Middle East as threats better dealt with as part of an alliance.

"In a world where you have got Putin to the east and ISIL-Daesh to the south, how do you stay strong?" Cameron asked, using alternative acronyms for the Islamic State group. "By sticking with your neighbouring countries, your partners and your friends."

British voters — and Cameron's ruling Conservative Party — are split on whether or not Britain should break free of EU bureaucracy, a so-called Brexit.

Polls suggest about a fifth of voters are undecided, though one poll published on Sunday showed the "in" campaign with a lead of 15 percentage points.

In what has been cast as Britain's biggest strategic decision in at least a generation, voters will be asked on June 23: "Should the United Kingdom remain a member of the European Union or leave the European Union?"

A British exit would rock the Union — already shaken by differences over migration and the future of the eurozone — by ripping away its second-largest economy, one of its top two military powers and by far its richest financial centre.

The mayor was immediately praised by one of the leaders of the "leave" campaign, who have been searching for a charismatic figure with mainstream appeal.

"We'd like to offer the Mayor of London a warm welcome to the Brexit campaign," said Leave.EU co-chairman Richard Tice. "We share his vision of a U.K. with full, democratic control of its affairs, and a relationship with Europe based on free trade and voluntary co-operation."

Pro-Europeans, including former prime ministers Tony Blair and John Major, have warned that an exit could also trigger the breakup of the United Kingdom by prompting another Scottish independence vote if England pulled Scotland out of the EU.

Though he is juggling a deeply divided party, Cameron's backing for EU membership has the support of the City of London, major companies, much of the Labour Party, major trade unions, international allies and even Scottish nationalists.

Johnson's popularity could galvanize those opposed to Cameron's position, providing a popular and recognizable figurehead for the several bickering "out" campaign groups which have so far failed to come up with a unified vision of Britain outside Europe.

An Ipsos MORI poll showed Johnson second only to Cameron when it comes to swaying public opinion on Europe. One in three voters said Johnson would be important in helping them decide which way to vote, the poll showed.

But in declaring his position on the most divisive issue in British politics, Johnson must also calculate whether his chances of succeeding Cameron, who will step down before 2020, are increased by joining the "out" campaign.