Police specialists are collecting evidence in the heart of London, the U.K. capital, and more police are patrolling the streets after a hit and run on London Bridge and stabbings at a nearby market — incidents described as terrorism — left seven people dead and dozens of others wounded. Police also shot three attackers dead.

Dozens remain in hospital, some 'critical,' after van hit and run on London Bridge, market stabbings

Police specialists collected evidence in the heart of London, England, and more police are patrolling the streets after a hit and run on London Bridge and stabbings at a nearby market — incidents described as terrorism — left seven people dead and dozens of others wounded.

Metropolitan Police Commissioner Cressida Dick told reporters early Sunday that the death toll of members of the public rose to seven from six, while police also killed three attackers. Dick noted that police responded to the attacks within eight minutes.

However, she urged the public to report anything suspicious to police, and remain calm and vigilant, and said they would continue to investigate to determine no one else was involved in the attacks.

"Our priority now is to work with counterterrorism police colleagues to establish more details about the attackers."

Earlier, Prime Minister Theresa May confirmed the latest attacks to rock the U.K. capital in recent weeks are "being treated as a potential act of terrorism," and said her thoughts are with "those who are caught up in these dreadful events." May has called an emergency security cabinet session Sunday to deal with the crisis.

Her Conservative Party, as well as the Labour Party and the Scottish National Party have suspended national campaigning for Thursday's general election.

"The Conservative Party will not be campaigning nationally today. We will review as the day goes on and as more details of the attack emerge," a spokesperson for May said.

The assault began Saturday night when a van veered off the road and barrelled into pedestrians on London Bridge.

Three men fled the van with large knives and attacked people at bars and restaurants in nearby Borough Market, police and witnesses said. London's Ambulance Service initially said more than 30 people were taken to hospitals for treatment, but that number rose to 48 early into Sunday morning. A number of other patients were treated for less serious injuries in the centre of the city.

There's no immediate word on the identities of those who died or were wounded. But French President Emmanuel Macron said French citizens are among the wounded. Australia said two of its citizens were caught up in the attack and that one was in hospital.

In a statement Sunday denouncing the "abominable and cowardly" attack, Macron said France will continue fighting "terrorism with all our strength alongside Britain and all other countries concerned."

'They kept coming to try to stab me. They were stabbing everyone. Evil, evil people.' - Gerald Vowls , witness

Also early Sunday, London Mayor Sadiq Khan said some of the wounded in hospital were in "critical" condition.

He also told reporters there's increased police presence in the city Sunday, and urged people not to be "alarmed" by it, but to remain vigilant.

Khan said the U.K. threat level will remain at "severe," meaning an attack is highly likely, and defended reducing it from "critical" after the deadly Manchaster attack two weeks ago, saying: "I'm reassured we are one of the safest global cities in the world."

"We don't yet know the full details, but this was a deliberate and cowardly attack on innocent Londoners and visitors," he said. "I condemn it in the strongest possible terms. There is no justification whatsoever for such barbaric acts."

"I'm a passionate believer in democracy, and making sure that we vote and we recognize actually that one of the things these terrorists hate is voting, they hate democracy."

The violence turned a summery night in an area packed with revellers into a scene of panic and chaos, with officers running through crowded streets screaming for people to flee. Lifeboats on the River Thames helped evacuate the area.

The Metropolitan Police force declared the attacks "terrorist incidents." Assistant Commissioner Mark Rowley said that while they believe all the attackers were killed, the investigation continued.

"We believe three people were involved, but we still have got some more inquiries to do to be 100 per cent confident in that," he said. 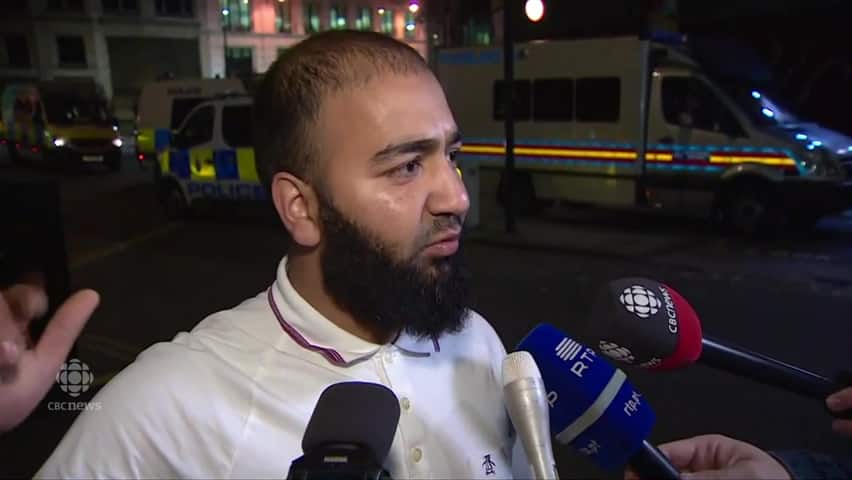 3 years ago
0:20
A witness describes his experience during London attack 0:20

As dawn broke over the capital, a large area on the south bank of the River Thames remained cordoned off. Police told people to avoid the area, leaving tourists and revellers struggling to get home.

Only hours before, bursts of gunfire echoed through the streets — likely from armed police — and at least three blasts rang out as officers performed controlled explosions. One image taken by a witness showed a man on the ground surrounded by police; he appeared to be wearing a vest with canisters attached to it.

"The suspects were wearing what looked like explosive vests," Rowley said. "But these were later established to hoaxes."

We don't yet know the full details, but this was a deliberate and cowardly attack on innocent Londoners and visitors. I condemn it in the strongest possible terms. There is no justification whatsoever for such barbaric acts.- London Mayor Sadiq Khan

One witness, Gerard Vowls, told the Guardian newspaper that he saw a woman being stabbed by three men at the south end of London Bridge. He said he threw chairs, glasses and bottles at the attackers in a bid to stop them.

"They kept coming to try to stab me. They were stabbing everyone. Evil, evil people," he told the newspaper. "I want to know if this girl is still alive. I've been walking around for an hour and a half crying my eyes out. I don't know what to do."

Bartender Alex Martinez said he hid in a garbage bin for a half-hour when a man stormed the nearly full restaurant where he worked.

"I saw that man with a knife in his hand and after that, a man started screaming, so I knew something wrong was happening," he said.

Medics treated the injured near the market as shocked people cried and shouted around them. Police officers yelled at people to run from the area.

Simon Thompson told Sky News he was just outside Borough Market when he saw crowds fleeing. 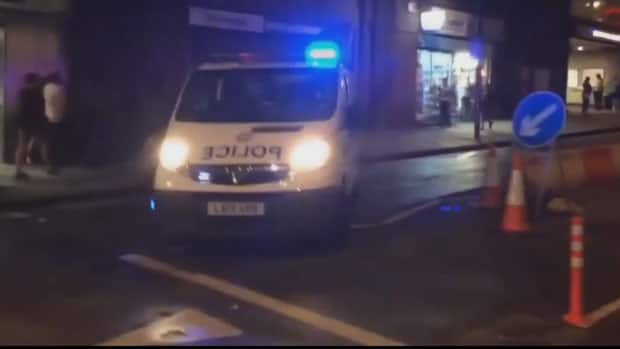 3 years ago
1:14
U.K. police respond to reports a van crashed into pedestrians near London Bridge. 1:14

"We ran for like 100 metres and then saw loads of police cars turned up, and there was kind of a period of quite intense gunfire," he said. "I hid in a restaurant basement for about an hour. ... Police told us to get out and then there was more gunfire."

Just after 9 p.m. local time, police responded to reports of a vehicle hitting pedestrians on London Bridge, which crosses the River Thames in central London. Multiple witnesses reported a vehicle veering off the road and hitting as many as six pedestrians.

Soon after, reports started coming in of stabbings at Borough Market, a nearby area full of bars and restaurants surrounding a popular food market. Witnesses reported seeing as many as three attackers with knives.

'The police were scared'

Photographer Gabriele Sciotto said he was on his way home from a pub when he saw a man running toward him telling him to turn around and run because there was a terrorist attack. As a documentary filmmaker, though, his instincts were to keep going.

He said that at first, "it didn't look too dangerous."

The men went into Borough Market, but then turned around and ran toward the Wheatsheaf Pub after being confronted by a police officer, he said, and suddenly a lot of police came from the other direction.

The attackers "had no clue what they were doing. They were scared. The police were scared," he said.

After one of the men was shot, Sciotto, 25, captured a photo of the suspect on the ground wearing what appeared to be canisters strapped to his chest.

Police initially said officers were also responding to a third incident, in the Vauxhall neighbourhood, but later said that turned out to be an unrelated stabbing.

As thousands of people flooded from the area of the attacks — many unable to get home with nearby subway stations shut — locals were quick to offer assistance.

The Royal Oak pub, near the area of the attacks, opened its doors to people evacuated from hotels. At least one taxi company offered free rides to people stranded in the area. Phaldip Singh, who describes himself as an entrepreneur and youth activist, tweeted that Sikh temples were open to provide food and shelter for those affected.

If confirmed as terrorism, this would be the third attack to hit Britain in as many months.

In March, a British convert to Islam ran down people with a vehicle on Westminster Bridge, killing four, then stabbed a policeman to death outside Parliament.

On May 22, a British suicide bomber killed 22 people and wounded dozens at an Ariana Grande concert in Manchester. After that attack, Britain's official threat level from terrorism was raised to "critical," meaning an attack may be imminent. Several days later it was lowered to "severe," meaning an attack is highly likely.

A charity concert for victims of the Manchester attack, featuring Grande and other stars, is due to be held in the northwest English city on Sunday.

Grande, who visited Manchester victims in the hospital on Friday, found herself confronted with another terror attack.

She tweeted: "Praying for London."

Info for Canadians in need

Canadian diplomats in England are advising Canadians to avoid the area around London Bridge.

Canada's senior diplomat in London said staff at the Canadian High Commission are monitoring the situation.

High Commissioner Janice Charette said people should stay away from London Bridge and Borough Market until the areas are deemed safe.

Prime Minister Justin Trudeau, speaking in Ottawa on Saturday at the annual parliamentary press gallery dinner, said, "Canadians stand united in sending our love and support to our friends in London." A couple of hours earlier, he tweeted: "Awful news from London tonight. We're monitoring the situation."

The Canadian High Commission urged Canadians in need to call 00 800 2326 6831 or email sos@international.gc.ca.

With files from CBC, Reuters