Semi-automatic weapons used by the Las Vegas shooter were reportedly equipped with bump stocks — devices that can increase the rate of fire to something similar to that of fully automatic weapons and have quickly become the focus of the gun control debate.

Semi-automatic weapons used by the Las Vegas shooter were reportedly equipped with bump stocks — devices that can increase the rate of fire to something similar to that of fully automatic weapons and have quickly become the focus of the gun control debate.

The devastating carnage that left 58 people dead and more than 500 injured has some pro-gun Republicans and even the powerful National Rifle Association talking about the need to review the legality of bump stocks and create new regulations.

But there is some debate among gun experts about whether a gun equipped with a bump stock actually becomes a more lethal weapon.

Perched nearly 100 metres above ground on the 32nd floor of the Mandalay Bay hotel about 350 metres from where an outdoor country music festival was taking place Sunday night, Stephen Paddock rained down gunfire on the crowd of festivalgoers through a broken window.

According to officials, 12 of Paddock's semi-automatic rifles were fitted with bump stocks.

For semi-automatic guns not fitted with bump stocks, the user must deliberately pull the trigger each time to fire off a round. Fully automatic weapons allow an individual to pull the trigger back and continually shoot until the magazine has emptied, meaning the rate of fire is substantially faster.

It's illegal to drill holes and install parts into semi-automatic weapons in an attempt to make a weapon fully automatic. This is why some gun enthusiasts will opt for a bump stock device, a legal alternative that can simulate rapid firing.

"It simulates something that everybody wants to try but nobody can afford," said Brian Guerra, co-owner of the Texas-based Armas De Guerra LLC, a gun manufacturing company.

A bump stock costs around $250 and replaces the gun's shoulder rest, with a "support step" that covers the trigger opening.

When firing a gun with a bump stock, by holding the pistol grip with one hand and pushing forward on the barrel with the other, the recoil of the gun pushes the gun back and forth so that the shooter's finger re-engages, or "bumps," the trigger faster, increasing the number of times one can pull the trigger. 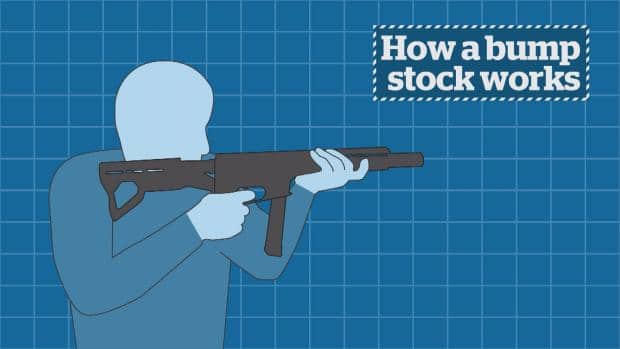 VIDEO: How a bump stock works

In 2010, Slide Fire, a gun manufacturer that makes the bump stock device, asked the the Bureau of Alcohol, Tobacco, Firearms and Explosives (ATF) to evaluate the admissibility of its new mechanism. The agency approved the device.

But critics of the bump stock see it as a loophole in the law that allows gun users to own weapons that have been effectively transformed into fully automatic machine-guns.

The only reason to modify a gun is to kill as many people as possible in as short as time as possible.- Dianne Feinstein, Democratic senator

"That's the same rate of fire as automatic weapons," the Democrat told reporters on Wednesday. "The only reason to modify a gun is to kill as many people as possible in as short as time as possible."

Frankie McRae, a former Green Beret who currently trains special operation forces for the U.S. Department of Defence, said he doesn't deny that you can shoot faster with such a device.

"When we're talking semantics of full auto versus bump fire, and we're getting the same effect, you're getting pretty damn close to that," McRae said.

However, bump fire guns or fully automatic weapons are just not as accurate or reliable as semi-automatic rifles, he said.

"The bump fire is actually not a very accurate attachment to the rifle, because you're kind of all over the place with it because of the way you have to hold it, so the gun has to move a lot more."

'Don't need to be accurate'

In fact, he said Paddock would likely have killed more people had he used a semi-automatic weapon that had not been modified with the bump stock.

"He could have actually been more deadly with a semi-auto rifle and accurately able to aim and take shots than with a bump fire," McRae said.

"You don't need to be accurate when you're shooting into 1,000 people or more."

In the Las Vegas shooting, where 22,000 were crowded together in an enclosure, the shooter's gunfire forced people to flee through a small opening in the fencing that surrounded the festival grounds, making them much easier targets.

"They're not going anywhere, so he doesn't have to be good. Every shot that he fired, he was hitting someone. He's just spraying."