A gunman on the 32nd floor of a Las Vegas hotel and casino unleashed a hail of bullets on an outdoor country music festival below Sunday, killing at least 59 people as thousands of concertgoers screamed and ran for their lives. 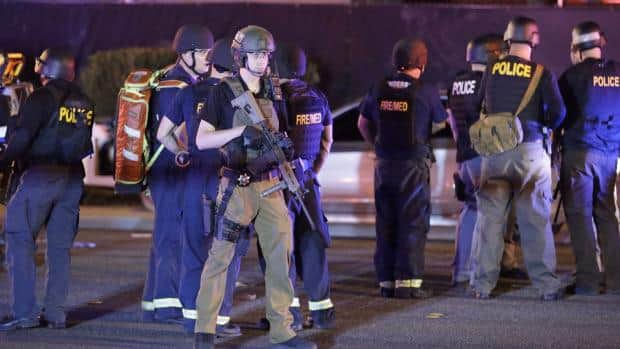 A gunman unleashed a hail of bullets from the 32nd floor of a Las Vegas hotel and casino on an outdoor country music festival below, killing at least 59 people as thousands of concertgoers screamed and ran for their lives, officials said Monday.

At least 527 others were injured in the Sunday night attack, authorities said. Some of the injured were trampled, others were hurt while hopping fences or navigating other obstacles as they fled the venue.

It was the deadliest mass shooting in modern U.S. history.

At least three Canadians are among the dead and six others were injured. The parents of 23-year-old B.C. man Jordan McIldoon said their son was killed at the festival.

Jessica Klymchuk of Valleyview, Alta., was also killed in the attack. She had four school-age children and worked at a local Catholic school in the Alberta town.

A third woman, from Jasper, is also among the dead.

The gunman, identified as Stephen Craig Paddock, a 64-year-old retiree from Mesquite, Nev., had 23 guns — some of them with scopes — in his hotel room, Clark County Sheriff Joseph Lombardo said. Reports from the police on the number of guns have changed during the day.

Two guns were modified to make them fully automatic, according to two U.S. officials briefed by law enforcement who spoke on condition of anonymity because the investigation is still unfolding.

How he got the weapons and ammo in his room isn't immediately known. But security experts say he could easily have hidden firearms and ammunition in suitcases, golf bags or other innocuous containers.

At Paddock's home in Mesquite, northeast of Las Vegas, authorities found 19 more guns, explosives and thousands of rounds of ammunition.

Lombardo said several pounds of ammonium nitrate fertilizer, a material that can be used to make explosives, was found in Paddock's car.

SWAT teams were also preparing to "hit" another property, he said. Later on Monday afternoon, police gathered outside a home owned by Paddock in an upscale part of Reno, Nev. Three SWAT team trucks and a bomb squad truck accompanied them.

U.S. President Donald Trump addressed the country on Monday and said the shooting was an "act of pure evil."

The sheriff said a check of federal and state databases showed Paddock was not on law enforcement authorities' radar before the bloodbath.

Aaron Rouse, the FBI agent in charge in Las Vegas, said investigators saw no immediate evidence connecting it to an international terror organization, despite a claim of responsibility from ISIS.

The U.S. Homeland Security Department said there was no "specific credible threat" involving other public venues.

It's believed Paddock checked in as a hotel guest. An earlier report suggested the gunman had been killed by police, but Lombardo said Monday morning that "we believe the individual killed himself prior to our entry."

Country music star Jason Aldean was performing at the end of the three-day Route 91 Harvest festival in front of a crowd of more than 22,000 when the shooting began. The gunman, located partway up the 44-floor Mandalay Bay Resort and Casino, apparently used a hammer-like device to smash out windows in his room and opened fire, authorities said. 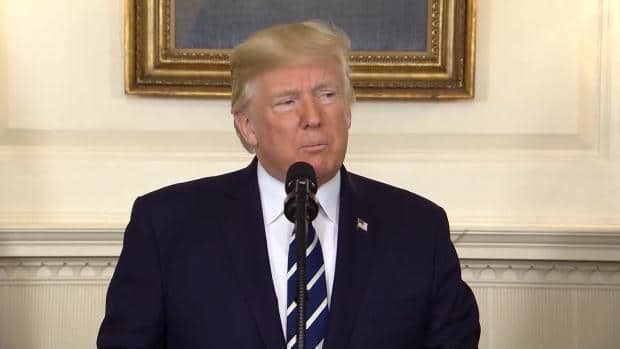 Trump: 'An act of pure evil'

The crowd, funnelled tightly into a wide-open space, had almost no cover and no easy way to escape.

Cam (Buzz) Brainard, a country radio host who witnessed the mayhem, told CBC News that the shooting sparked chaos and panic as people tried to flee the crowded festival grounds.

Brainard, who initially dove under a tour bus to avoid bullets, said he just "ran and ran" to the sound of sporadic gunfire, surrounded by a massive crowd of moving people.

John  Belland and his wife, Karen, of Nelson, B.C, were at the festival and also said they didn't recognize the sound of gunfire at first. Then audience members around them started to run for their lives.

"We saw people fall," John told CBC News. "At the time I thought they were just tripping but now, looking back, it was clear that they were actually being hit by bullets."

The couple took cover under some bleachers with other terrified concertgoers and waited for the gunfire to stop. 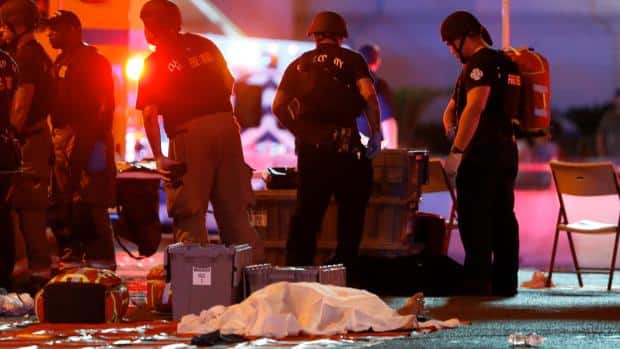 "To the families of the victims, we are praying for you and we are here for you, and we ask God to help see you through this very dark period."

Trump said "though we feel such great anger at the senseless murder of our fellow citizens, it is our love that defines us today, and always will."

The president said he would head to Las Vegas on Wednesday to meet with victims, their families and first responders. He was already expected to be in hurricane-ravaged Puerto Rico on Tuesday.

Paddock's brother, Eric Paddock, who lives in Florida, told the Orlando Sentinel: "We are completely dumbfounded. We can't understand what happened."

Authorities said Monday that investigators had contacted 62-year-old Marilou Danley, who was initially mentioned as a person of interest.

"We have located her out of the country," Lombardo said Monday morning, adding that police believe the shooter was using some of her identification.

"We have had conversation with her, and we believe her, at this time, not to be involved," he said.

The death toll in Nevada surpassed the 49 from the Orlando nightclub shooting that also left dozens wounded in June 2016, when a 29-year-old gunman was shot and killed by police.

Hours after Sunday's shooting, country singer Jason Aldean, one of the performers, posted on Instagram that he and his crew were safe, and said the shooting was "beyond horrific."

Brainard said he was in the artist area just off the stage when the shooting started.

"It was probably the closest point to Mandalay Bay of the entire festival grounds," he said. He, too, thought the sounds were fireworks, or possibly a blown power line.

He said people wandered out of the tent, and it became clear what was going on as the panic hit.

"In that area, right next to the stage, we dove underneath the tour buses for the artists," he said. "So we're on the ground, and that's when some of the dirt started kicking up around us because bullets were being fired there."

Brainard, who was with his 19-year-old son, said he and the people around him had to cross over the stage to get away from the area.

"We joined the masses of concertgoers, 30,000 people, so now you're starting to see people that are wounded and you're also seeing people getting trampled."

Brainard said he eventually found safety at the Tropicana Hotel, which was locked down.

Kodiak Yazzie, 36, said he and his girlfriend were watching Aldean's performance when he heard what sounded like fireworks. The music stopped temporarily and started up again before another round of pops sent the performers ducking for cover and fleeing the stage.

Thousands fled as bursts of gunfire could be heard for more than five minutes, Yazzie said. 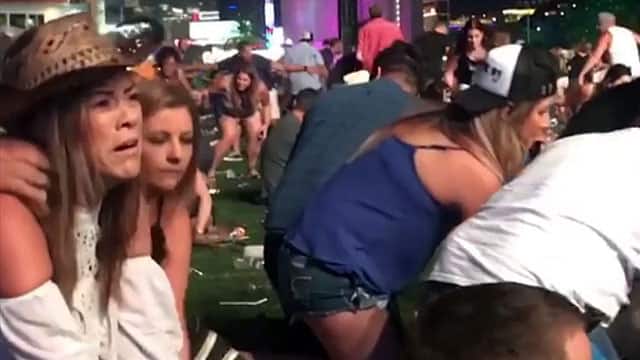 3 years ago
0:50
Warning: Disturbing content | Concertgoers at the Route 91 Harvest festival take cover as a gunman opens fire from the 32nd floor of a Las Vegas hotel and casino. Video is looped three times. 0:50

Hospital emergency rooms were jammed with the wounded. Representative Ruben Kihuen, a Democrat whose congressional district includes a portion of Las Vegas, visited a hospital where some of the victims were taken and said: "Literally, every single bed was being used, every single hallway was being used. Every single person there was trying to save a life."

Police said that identifying all of the victims from the shooting will be a "long, laborious process."

A GoFundMe campaign set up by Clark County Commission chair Steve Sisolak "to provide relief and financial support to the victims and families of the horrific Las Vegas mass shooting​" had raised more than $1.26 million by Monday afternoon.