When no one else would believe the gymnasts about Larry Nassar, these reporters did

When former gymnast Rachael Denhollander approached the Indianapolis Star last year with allegations of sexual abuse against former sports doctor Larry Nassar, journalists saw merit in her story, and the assistant attorney general later praised their reporting as integral to the case.

When Tim Evans arrived at then-sports doctor Larry Nassar's office in the fall of 2016, he admits to being nervous about the moment that was about to unfold.

"It was a daunting task going in there. This guy was an icon in the sports world and the gymnastics world," he says.

An investigative journalist for the Indianapolis Star, Evans was in Lansing, Mich., to tell Nassar that he and his colleagues had been looking into complaints that Nassar had sexually assaulted at least three former female gymnasts under the guise of treating them for pain.

"It was stressful, but it was also enlightening," Evans says of that interview. "He had an odd demeanour. At times he was very confident, at other times he was almost pathetic and pleading that we not run the story.

"But his reaction to some of the questions I was able to ask, just his body language made me come out of there feeling like there was something to our story," Evans told CBC News for this week's edition of The Investigators.

The newspaper launched its investigation weeks earlier after receiving a pivotal email from Rachael Denhollander, a former gymnast who said Nassar had assaulted her. She also said no one she had told at USA Gymnastics had believed her. She hoped the journalists would.

"She was very convincing. She had medical records," Evans says. "She had things very organized. It gave us confidence moving forward."

But investigating the story would mean finding other victims. The journalists found two other women who were living in other parts of the country.

"They told such strikingly similar stories," Evans says. The women recounted Nassar inserting his fingers inside them, without gloves, claiming it would help them recover from injury.

"We were asking them incredibly personal details about the most traumatic experiences of their lives," says Marisa Kwiatkowski, Evans' colleague. "The fact they trusted us to share that information and to share it in a sensitive way I think for us was a significant part of this investigation."

The Indianapolis Star published its investigation of Nassar on Sept. 12, 2016, just over a month after receiving Denhollander's email. By the time Nassar was sentenced, more than 150 people had come forward.

Nassar initially claimed the women had misunderstood the nature of the treatment, which he insisted was purely medical. The journalists feared Nassar's reputation would overwhelm the women's stories.

"There was a fear on our part and our editor's part that this would get wrapped up into some sort of dispute over medical terms or obscure medical procedures and that the victims would be forgotten, the sexual assault part of it," Evans says.

But, as cable news networks broadcast live this week, Nassar was sentenced to 175 years behind bars for his crimes.

The last of 156 women who gave heartbreaking victim impact statements in court detailing what he had done to them, was Denhollander.

Kwiatkowski says she watched in awe of the women who were now finally being believed.

"[I was] just really impressed by the strength and resilience that they showed," she said.

State Assistant Attorney General Angela Povilaitis, who tried the case, thanked the reporters in court before the sentence for sexual misconduct was handed down on Jan. 24.

"Thank God we have these journalists, and that they exposed this truth and that they continue to cover this story," she said. "Thank God Rachael Denhollander made that first contact with the reporter and decided to allow them to publish her name."

Evans says that moment was "a reminder to people that we don't have to be the New York Times or the Washington Post. We can be a mid-sized newspaper with commitment to doing the right thing and helping people."

Also this week on The Investigators with Diana Swain: The Fifth Estate's Mark Kelley talks about his investigation into how Canadian police will try to determine who is driving high after pot is legalized in Canada later this year. 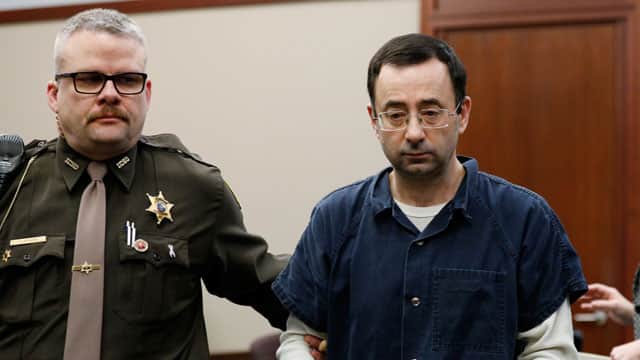 Larry Nassar gymnastics abuse case: How a newspaper exposed the story (The Investigators with Diana Swain)

3 years ago
6:49
Larry Nassar was convicted of sexual abusing U.S. gymnasts under his care. Diana Swain speaks with two journalists from the Indianapolis Star who were part of the team that broke that story. Watch The Investigators Saturdays at 9:30 pm ET and Sundays at 5:30 pm ET on CBC News Network. 6:49
CBC's Journalistic Standards and Practices|About CBC News