Chinese prosecutors charged two detained Canadians with spying Friday in an apparent bid to step up pressure on Canada to drop a U.S. extradition request for a Huawei executive under house arrest in Vancouver. 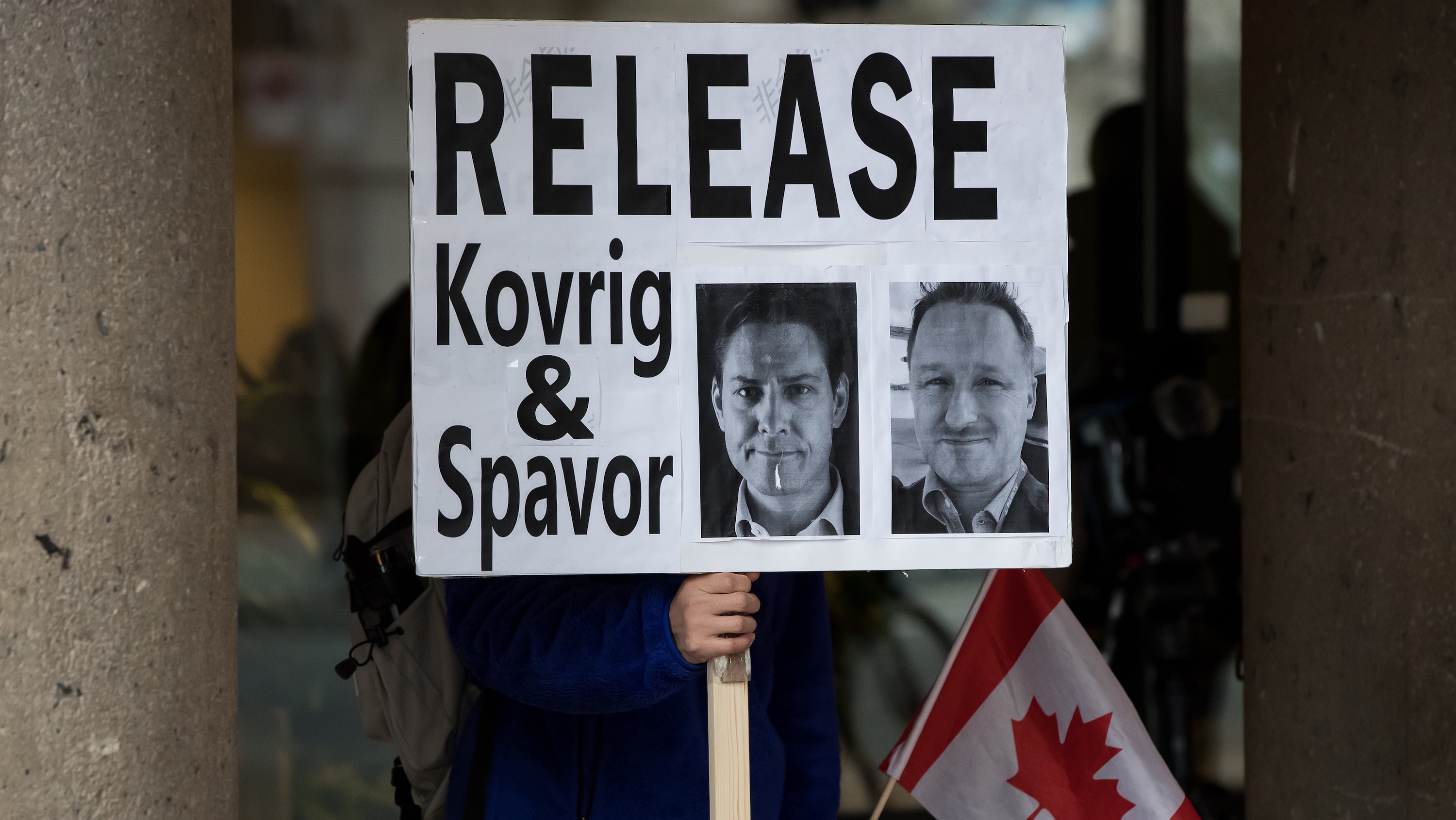 China elevates case against two Canadians with charges of espionage

5 months agoVideo
3:08
Laying formal charges is a significant step, but there isn't any clarity over when the cases might proceed in court, says freelance reporter Richard Kimber.  3:08

Chinese prosecutors charged two detained Canadians with spying Friday in an apparent bid to step up pressure on Canada to drop a U.S. extradition request for a Huawei executive under house arrest in Vancouver.

The charges were announced by China's highest prosecutor's office in brief social media posts. CCTV, a state-owned broadcaster controlled by the Communist regime in Beijing, read the charges live in a national broadcast.

Zhao Lijian, a spokesperson for the Chinese foreign ministry, told reporters the "circumstances are particularly serious," and that the government has amassed "solid and sufficient" evidence to proceed with the criminal charges against both men.

Under Chinese law, there is no formal timeline for when someone charged with such crimes must go to trial.

Activists and academics have raised serious concerns about the independence of the Chinese judiciary, with critics accusing the court system of being an organ of the Communist party.

Robert Malley, the president and CEO of the International Crisis Group, the company where Kovrig works as a senior adviser on northeast Asian issues, said the charges against Kovrig are bogus and he was not engaged in "espionage."

"He has become an unfortunate pawn in a larger struggle among the U.S., Canada and China. But today's charges change nothing to our resolve to secure Michael's release and to our hope and expectation that he will soon be united with his loved ones," Malley said.

Both Kovrig and Spavor have been held for 18 months. They were detained shortly after the December 2018 Vancouver arrest of Meng Wanzhou, a top executive at Chinese tech giant Huawei. The daughter of Huawei's founder was arrested at the request of U.S. authorities who want her on fraud charges related to trade with Iran.

China has repeatedly called for the release of Meng, and has warned Canada that it could face consequences for aiding the U.S. in Meng's case.

5 months agoVideo
6:25
'I was just devastated to hear that,' says Kevin Garratt, describing the tyranny of uncertainty during his own imprisonment: 'The not-knowing is really the hardest.'   6:25

'Years of difficult relations' ahead

Guy Saint-Jacques, Canada's former ambassador to China between 2012 and 2016, said the formal charges will make it much more difficult to negotiate a safe return of the men to Canada. He said the charges are clearly tied to Meng's ongoing legal challenges.

"They have decided to add pressure on the Canadian government by formally proceeding with this trial," he said in an interview with CBC News.

He said the likelihood of Kovrig and Spavor being convicted is high — the conviction rate for these offences is 99.9 per cent, he said — and they are likely to receive life sentences from the regime-dominated judiciary.

"If we go back to China and ask them to return our two Canadians, they will say: 'Don't ask us to intervene in a legal process, don't you know China is a country governed by the rule of law?'"

Saint-Jacques said Canada will have to brace itself for "years of difficult relations."

He said, to this point, Canada has followed a policy of "appeasement" with China that has proven fruitless.

He said the Liberal government has been reluctant to comment on Beijing's crackdown on freedoms in Hong Kong, call out the regime for building concentration camps for Muslim Uighurs and criticize China's slow COVID-19 response — and yet China has still held two Canadian nationals in prison on questionable grounds.

"What have we achieved so far with this appeasement strategy? I'd argue nothing," Saint-Jacques said. Canada must now take an aggressive approach to its dealing with China, he said.

"We should look at everything in China and see where we can be less forthcoming than what we have been up to now," he said.

The former ambassador said Canada should move trade resources out of China to other Asian nations and step up inspections on exports from the east Asian nation.

He said Canadian authorities should jail Chinese spies and work with allies to "tarnish the reputation" of China.

China has denied any link between Meng's case and the lengthy detention of the two Canadian men, but outside experts see them as linked. Meng has been released on bail while her extradition case proceeds in court.

Meng is accused of lying to an HSBC executive in Hong Kong in August 2013 about Huawei's relationship with Skycom, a company prosecutors claim was violating U.S. economic sanctions against Iran.

The U.S. claims Skycom was actually a subsidiary of Huawei and that HSBC and other banks placed themselves at risk of prosecution and financial loss by continuing to provide financing to Huawei based on Meng's reassurances.

Meng, the daughter of Huawei's billionaire founder, has denied the allegations.

Meng was released on $10 million bail and has been living for the past year and a half under a form of house arrest in one of two homes she owns on Vancouver's west side.

In China, Kovrig and Spavor remain in solitary confinement. Neither man has been seen by Canadian consular officials since January.

Last month, a B.C. judge ruled the U.S. extradition case against Meng could proceed to the next stage. 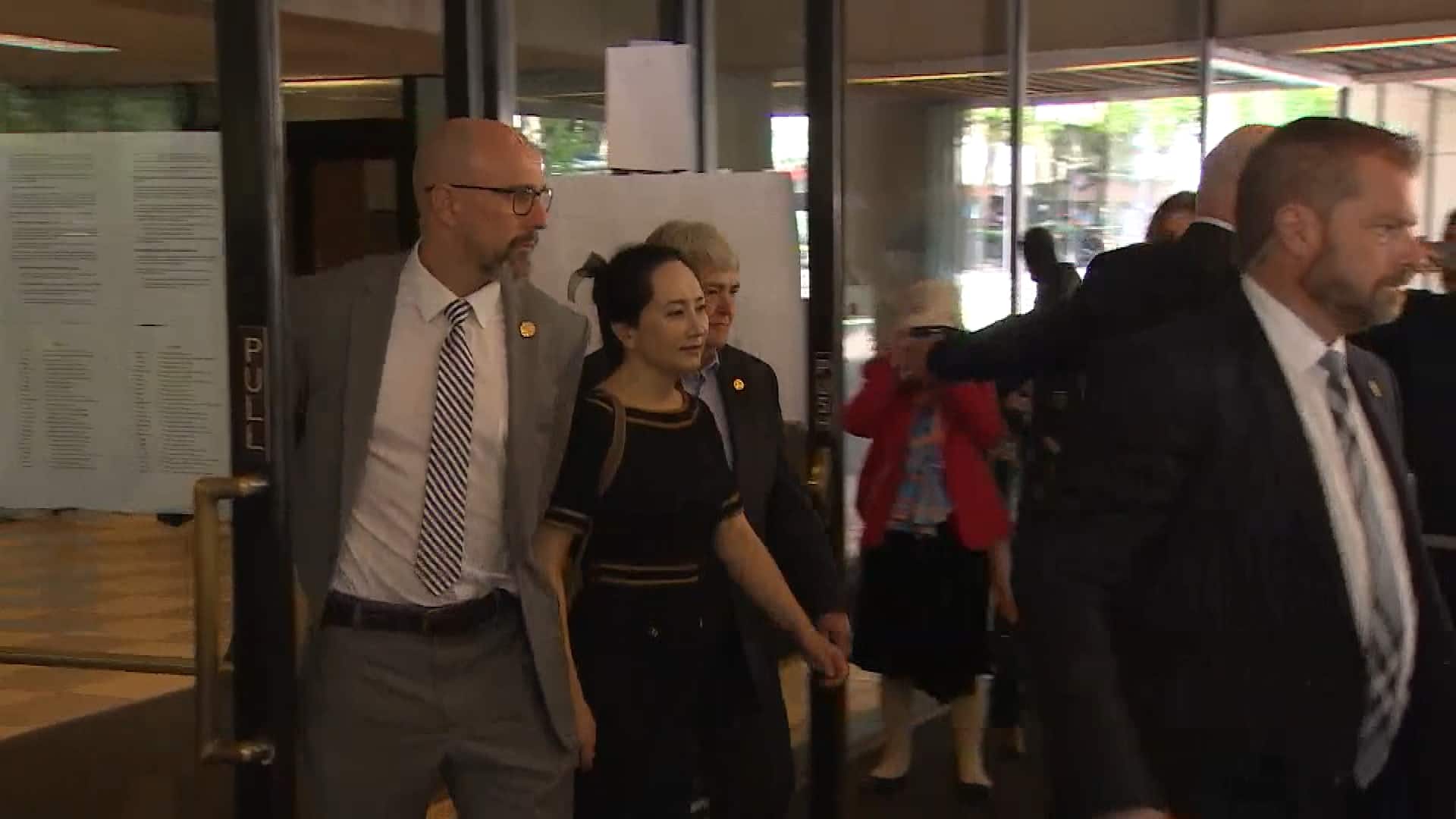 6 months agoVideo
0:57
Huawei CFO Meng Wanzhou lost a major court battle on May 27, 2020, as a B.C. Supreme Court judge ruled extradition proceedings against her should move ahead. 0:57

Associate Chief Justice Heather Holmes dealt Meng's defence a significant blow by ruling that the proceedings should continue, as the case met the bar for so-called "double criminality" and that Meng's alleged offence would be considered a crime had it happened in Canada.

Kovrig is a former Canadian diplomat who has worked as a senior adviser for International Crisis Group. ICG has previously said the accusations against Kovrig are "vague and unsubstantiated."

Spavor, 44, is a businessman, originally from Calgary, who helped to arrange travel into North Korea.

China has also sentenced two other Canadians to death and suspended imports of Canadian canola, while saying those moves were also unrelated to Meng's case.

Relations between Canada and China are at their lowest point since the Chinese military's bloody crackdown on pro-democracy protests centred on Beijing's Tiananmen Square in 1989.

Malley said in an interview last December that his former employee was holding up in prison, basing his assessment on what he's heard from Canadian officials who have visited him.

At the time, the two Canadians had been allowed about one consular visit per month by Canadian diplomats. But they have been denied access to lawyers and all others.

The tensions appear to be causing further harm to Huawei's reputation in the Americas, with two of Canada's three major telecommunication companies announcing earlier this month that they've decided not to use the Chinese tech giant for their next-generation 5G wireless network.

Huawei is the world's biggest supplier of network gear used by phone and internet companies, but has long been seen as a front for spying by China's military and its highly skilled security services.

The U.S. has urged Canada to exclude Huawei equipment from its next-generation wireless networks, saying Huawei is legally beholden to the Chinese regime. The United States and Australia have banned Huawei, citing concerns it is an organ of Chinese military intelligence — a charge the company denies.