Her departure was first reported by CBS News.

A senior administration official said Trump asked for Nielsen's resignation and she gave it.

Trump said on Twitter: "Secretary of Homeland Security Kirstjen Nielsen will be leaving her position, and I would like to thank her for her service."

Nielsen, 46, had been DHS secretary since December 2017. Her time overseeing the sprawling department included conflict with Trump and overseeing a policy of separating children from their migrant parents at the border with Mexico.

Trump has made a clampdown on illegal immigration a centerpiece of his two-year-old presidency, as he has sought to cut back on the number of newcomers, especially Mexicans and Central Americans, entering the United States without proper documentation.

In her resignation letter, Nielsen asked for more from Congress and the courts, which have opposed such Trump administration initiatives as his effort to limit immigration from Muslim nations and the separation of children from their families.

.<a href="https://twitter.com/SecNielsen?ref_src=twsrc%5Etfw">@SecNielsen</a> separated mamas from their babies and locked little children in cages.<br><br>I’m not sorry to see her go. I only wish she’d been fired long ago, before she ever had a chance to resign.

"I hope that the next Secretary will have the support of Congress and the courts in fixing the laws which have impeded our ability to fully secure America's borders and which have contributed to discord in our nation's discourse," she wrote to Trump.

Nielsen's departure was announced two days after the Republican president abruptly said on Friday he was dumping his own nominee to be the top official at U.S. Immigration and Customs Enforcement (ICE), Ronald Vitiello, saying he wanted someone "tougher."

ICE is under the jurisdiction of DHS.

Under fire by Democrats

Repeatedly subjected to tough questioning by Democrats at congressional hearings, Nielsen became a lightning rod for criticism of Trump's policies. She was confronted by protesters last year at a Mexican restaurant in Washington.

As leader of DHS, Nielsen was responsible for carrying out some of Trump efforts such as his battle to build a wall on the border with Mexico, stepped-up deportations and treatment of migrant children, as images of children being held in cages were spread around the world.

Trump insists that the arrival of migrants across the southern U.S. border constitutes a national emergency so important that he sidestepped Congress' refusal to provide him with several billion dollars he requested to build the border wall.

Watch: Nielsen driven out of restaurant by protestors 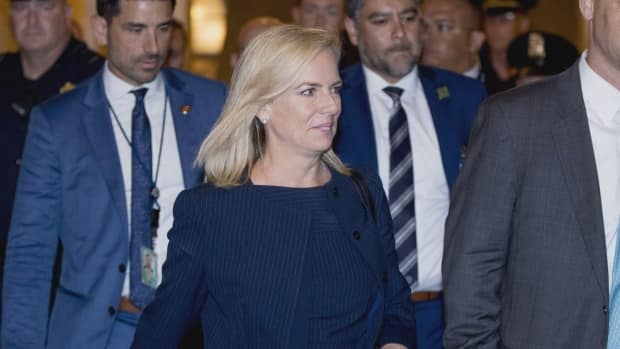 3 years ago
0:43
Kirstjen Nielsen dining in Mexican restaurant is set upon by vocal group of people opposing the detention of migrant children 0:43

Rep. Bennie Thompson, the Democratic chairman of the House of Representatives Homeland Security Committee, said Nielsen's tenure at DHS "was a disaster from the start."

He said in a statement, however, that she should not serve as a scapegoat, blasting Trump for "terrible and cruel policies." Noting that the department now has neither a permanent secretary nor deputy secretary, he called on the administration to work with Congress in good faith to keep the country safe.

The Trump administration adopted the policy of separating migrant children from their parents early last year as part of its "zero tolerance" approach to illegal immigration, intended to deter families from leaving home in the hope of entering the United States.

After domestic and international criticism, Trump signed an executive order in June ending family separations, but a government report last month showed that more than 200 children had been taken from their families since that time.

Trump recently threatened to close the border with Mexico, or parts of it, if Congress did not change U.S. laws to fix what he called immigration "loopholes."

Nielsen's departure has been rumoured repeatedly. News reports said Trump had belittled her in Cabinet meetings, unhappy with her efforts to tighten immigration.

While I believe Secretary Nielsen did an outstanding job, I have full confidence in Acting Director Kevin McAleenan. <br><br>He has a complete understanding of the problems at our southern border and has shown a willingness to work across the aisle. <br> <a href="https://t.co/ftaggdugtO">https://t.co/ftaggdugtO</a>

The New York Times reported nearly a year ago, in May 2018, that Nielsen was close to resigning after Trump berated her in front of other Cabinet secretaries over increases in the number of migrants crossing illegally from Mexico.

Before she was nominated as secretary, Nielsen worked as a deputy to former Marine Gen. John Kelly, who headed DHS before becoming White House chief of staff.

Kelly resigned as chief of staff on Jan. 2 amid reports of a strained relationship with Trump.