Saudi Arabia's acknowledgement that Khashoggi died came after two weeks of denials and growing demands from Western allies for an explanation over Khashoggi's disappearance, which galvanized a global outcry and prompted some U.S. lawmakers to call for harsh action against Riyadh. 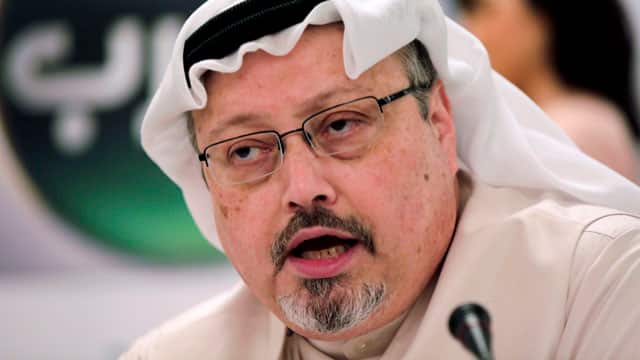 2 years ago
3:40
Saudi Arabia admitted that dissident journalist Jamal Khashoggi has died, and said it fired two senior officials over the incident that has provoked international outcry. A statement from the Saudi public prosecutor said a fight broke out between Khashoggi and people who met him in the consulate, leading to his death. 3:40

Saudi Arabia said on Saturday that journalist Jamal Khashoggi died in a fight inside its Istanbul consulate and that it fired two senior officials over his death, an account U.S. President Donald Trump said was credible but which drew deep skepticism from U.S. lawmakers.

Saudi Arabia's acknowledgement that Khashoggi died in the consulate came after two weeks of denials that it had anything to do with his disappearance, and followed growing demands from Western allies for an explanation of what happened.

His disappearance sparked a global outcry and prompted some U.S. lawmakers to call for harsh action against Riyadh.

Saudi Arabia provided no evidence to support its account of the circumstances that led to Khashoggi's death and it was unclear whether Western allies would be satisfied with the Saudi version of events.

"Saudi Arabia has been a great ally. What happened is unacceptable," he said, adding that he would speak with the crown prince.

Some U.S. lawmakers however were unpersuaded by Riyadh's account.

"To say that I am skeptical of the new Saudi narrative about Mr. Khashoggi is an understatement," said Republican U.S. Sen. Lindsey Graham, a Trump ally who has been sharply critical of Saudi Arabia over the incident.

Trump said he would be working with Congress on next moves, but "I would prefer that we don't use as retribution cancelling $110 billion US worth of work, which means 600,000 jobs .... we need them as a counterbalance to Iran."

It’s hard to find this latest “explanation” as credible.

Khashoggi, a critic of the crown prince who lived in the United States and was a Washington Post columnist, had led to mounting pressure from the West on Saudi Arabia to provide convincing answers.

He went missing after entering the consulate on Oct. 2 to obtain documents for his upcoming marriage. Days later, Turkish officials said they believed he was killed in the building, an allegation that Saudi Arabia had, until now, strenuously denied.

In a separate statement on Saturday, the Saudi public prosecutor said a fight broke out between Khashoggi and people who met him in the consulate, leading to his death.

"The investigations are still underway and 18 Saudi nationals have been arrested," the statement said.

Turkish sources have told Reuters the authorities have an audio recording purportedly documenting Khashoggi's murder inside the consulate. Turkish pro-government newspaper Yeni Safak has published what it said were details from the audio. It said Khashoggi's torturers cut off his fingers during an interrogation and later beheaded and dismembered him.

Before the Saudi announcements, Trump said he might consider sanctions, although he has also appeared unwilling to distance himself too much from the Saudi leadership.

Other Western allies have yet to react to Riyadh's explanation and a main question will be whether they believe that Crown Prince Mohammed bin Salman, who has painted himself as a reformer, has no culpability.

King Salman has handed the day-to-day running of Saudi Arabia to his son, commonly known as MbS.

But, the disappearance of Khashoggi has tarnished Prince Mohammed's reputation and deepened questions about his leadership.

And, the growing crisis prompted the king to intervene, five sources with links to the Saudi royal family told Reuters.

The White House said in a statement that it had seen the Saudi announcement and would continue to press for "justice that is timely, transparent, and in accordance with all due process."

Saudi actions &amp; explanations continue to defy credibility &amp; common sense. No way should the world wait 30 days for a Saudi whitewash or cover up. U.S. must call for an international investigation that holds accountable all responsible—not just Crown Prince's fall guys.

Republican Sen. Rand Paul tweeted: "We should also halt all military sales, aid and cooperation immediately. There must be a severe price for these actions by Saudi Arabia."

In an early rebuke to Riyadh, senior officials from several governments — including U.S. Treasury Secretary Steven Mnuchin — executives from major companies and international media commentators withdrew from a high-profile investment conference slated for later this month.

'No orders to kill him'

Qahtani, 40, entered the royal court under the late King Abdullah but only rose to prominence after latching onto Prince Mohammed, becoming a rare confidante in his secretive inner circle.

Sources say Qahtani would regularly speak on behalf of the crown prince and has given direct orders to senior officials including in the country's security apparatus.

People close to Khashoggi and the government said Qahtani had tried to lure him back to Saudi Arabia after he moved to Washington a year ago fearing reprisals for his views.

In a Twitter thread from August 2017 asking his 1.35 million followers to flag accounts to include in a black list for monitoring, Qahtani wrote: "Do you think I make decisions without guidance? I am an employee and a faithful executor of the orders of my lord the king and my lord the faithful crown prince."

The other dismissed official, Asiri, had joined the Saudi military in 2002, according to Saudi media reports, serving as spokesperson for a coalition backing Yemen's ousted president after Prince Mohammed led Saudi Arabia into that country's civil war in 2015. Asiri was named deputy chief of foreign intelligence by royal decree in April 2017.

The crown prince had no knowledge of the specific operation that resulted in Khashoggi's death, a Saudi official familiar with the investigation told Reuters.

"There were no orders for them to kill him or even specifically kidnap him," said the official, speaking on condition of anonymity and adding that there was a standing order to bring critics of the kingdom back to the country.

"MbS had no knowledge of this specific operation and certainly did not order a kidnapping or murder of anybody. He will have been aware of the general instruction to tell people to come back," the official said.

The official said the whereabouts of Khashoggi's body were unclear after it was handed over to a "local co-operator" but there was no sign of it at the consulate.

The public prosecutor's statement did not specify where the operatives had put Khashoggi's body or if they plan to inform the Turks. The Saudi official told Reuters, "We don't know for certain what happened to the body."

Saudi critics said it was obvious the authorities didn't want to hand over Khashoggi's body as it would reveal how badly he was tortured.