Two Canadians, including a diplomat, are among the 39 people killed and more than 150 wounded after Islamic extremist gunmen raided Nairobi's top mall Saturday, lobbing grenades and firing assault rifles. 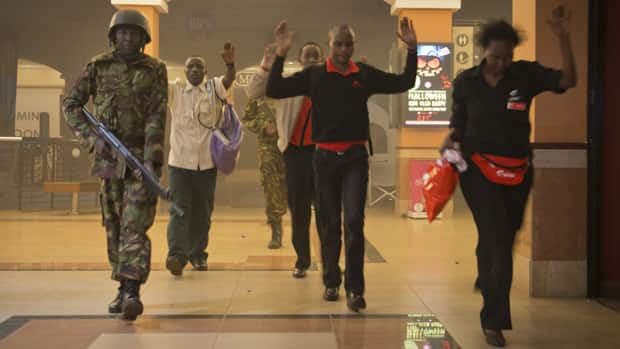 Two Canadians, including a diplomat, are among the 39 people killed and more than 150 wounded after Islamic extremist gunmen raided Nairobi's top mall Saturday, lobbing grenades and firing assault rifles.

The Prime Minister's Office released a statement identifying 29-year-old Annemarie Desloges, an official in the Department of Citizenship and Immigration who served in Canada's High Commission to Kenya, as one of those killed.

"Canada condemns in the strongest possible terms this cowardly, hateful act that apparently targeted innocent civilians who were simply out shopping," Prime Minister Stephen Harper said in extending his condolences to the victim's families.

Early Sunday morning, 12 hours after the attack began, gunmen remained holed up inside the mall with an unknown number of hostages. Kenyan President Uhuru Kenyatta called the security operation under way "delicate" and said a top priority was to safeguard hostages.

As the attack unfolded shortly after noon Saturday, the al-Qaeda-linked gunmen asked the victims they had cornered if they were Muslim. If the answer was yes, several witnesses said, those people were free to go. The non-Muslims were not.

Kenyatta said that his close family members were among the dead, and local media reported his sister escaped the mall uninjured.

Other foreigners were among the casualties. France's president said two French women were killed, and there were reports of American citizens injured, but the U.S. State Department said it had no further details.

"Acts of terror cannot be allowed to go unpunished. Canadian staff at our mission are offering Kenyan authorities every possible assistance to bring the perpetrators of this heinous attack to justice," Harper said.

Desloges is survived by her husband, Robert Munk.

The PMO said the family of the second Canadian victim has not been notified, and therefore the person's name is not being released.

Desloges worked as a liaison officer with the Canada Border Services Agency at the High Commission and has been public servant for the Canadian government since 2008. She was previously posted in New Delhi and had been working in Nairobi for the past two years.

"She was an experienced immigration officer who had served Canada for many years and obviously our thoughts and prayers go to her family and friends," Baird said.

Al-Shabaab said on its Twitter feed that Kenyan security officials were trying to open negotiations. "There will be no negotiations whatsoever," al-Shabaab tweeted.

Witnesses said at least five gunmen — including at least one woman — first attacked an outdoor cafe at Nairobi's Westgate Mall, a shiny, new shopping centre that hosts Nike, Adidas and Bose stores. The mall's ownership is Israeli, and security experts have long said the structure made an attractive terrorist target.

The attack began shortly after noon with bursts of gunfire and grenades. Shoppers — expatriates and rich Kenyans — fled in any direction that might be safe: into back corners of stores, back service hallways and bank vaults. Over the next several hours, pockets of people poured out of the mall as undercover police moved in. Some of the wounded were moved out in shopping carts.

"We started by hearing gunshots downstairs and outside. Later we heard them come inside. We took cover. Then we saw two gunmen wearing black turbans. I saw them shoot," said Patrick Kuria, an employee at Artcaffe, the restaurant with shady outdoor seating.

Frank Mugungu, an off-duty army sergeant major, said he saw four male attackers and one female attacker. "One was Somali," he said, but the others were black, suggesting that they could have been Kenyan or another nationality.

Al-Shabaab, on its Twitter feed, said that it has many times warned Kenya's government that failure to remove its forces from Somalia "would have severe consequences." The group claimed that its gunmen had killed 100 people, but its assertions are often exaggerated.

American Sara Head spoke to CBC News about what it was like to hide from gunmen at the Westgate shopping centre in Nairobi. Read her story here.

"The attack at Westgate Mall is just a very tiny fraction of what Muslims in Somalia experience at the hands of Kenyan invaders," al-Shabaab said. Another tweet said: "For long we have waged war against the Kenyans in our land, now it's time to shift the battleground and take the war to their land."

Al-Shabaab threatened in late 2011 to unleash a large-scale attack in Nairobi. Kenya has seen a regular spate of grenade attacks since then but never such a large terrorist assault.

The U.S. State Department condemned "this senseless act of violence that has resulted in death and injury for many innocent men, women, and children."

The gunmen told hostages that non-Muslims would be targeted, said Elijah Kamau, who was at the mall at the time of the midday attack.

"The gunmen told Muslims to stand up and leave. They were safe, and non-Muslims would be targeted," he said.

Jay Patel, who sought cover on an upper floor in the mall when shooting began, said that when he looked out of a window onto the upper parking deck of the mall he saw the gunmen with a group of people. Patel said that as the attackers were talking, some of the people stood up and left and the others were shot.

The gunmen told Muslims to stand up and leave. They were safe, and non-Muslims would be targeted.- Elijah Kamaum witness

The gunmen carried AK-47s and wore vests with hand grenades on them, said Manish Turohit, 18, who hid in a parking garage for two hours.

"They just came in and threw a grenade. We were running and they opened fire. They were shouting and firing," he said after marching out of the mall in a line of 15 people who all held their hands in the air.

A local hospital was overwhelmed with the number of wounded being brought in hours after the attack, so they had to divert them to a second facility. Officials said Kenyans turned out in droves to donate blood.

The United Nations secretary-general's office said that Ban Ki-moon has spoken with President Kenyatta and expressed his concern.