Kenya vote tallying appears to be above board: EU, John Kerry

International observers on Thursday praised the handling of Kenya's presidential election, with the European Union mission saying it had seen no sign of manipulation despite opposition complaints and scattered protests.

Celebrations broke out in pockets of Kenya on Thursday where the opposition said its candidate Raila Odinga should be declared winner of the presidential vote, a claim an election commission official said was "ridiculous."

An opposition official said information from "confidential sources" showed Odinga had secured victory, contradicting official preliminary results released so far which show President Uhuru Kenyatta had won 54.2 per cent of votes, ahead of Odinga with 44.9 per cent — a lead of 1.4 million votes with 99 per cent of polling stations reported.

The official results didn't stop opposition members and their supporters from celebrating, despite international observers praising the handling of the election Thursday.

European Union mission said it had seen no sign of manipulation despite repeated opposition complaints and scattered protests.

As they wait for final results to be tallied and confirmed, many Kenyans are nervous of a repeat of the clashes that killed about 1,200 people after a bitterly contested 2007 election.

Musalia Mudavadi, a senior official in the opposition coalition, told reporters information from "confidential sources" at the election commission showed Odinga had secured victory by just under 300,000 votes. He provided no evidence but demanded Odinga be declared the winner.

Minutes later, hundreds of Odinga supporters, mainly young men, poured onto the streets of the opposition stronghold of Kisumu in celebration. At least one truck of anti-riot police followed them, a witness said. Some older men tried to convince the youth not to join the crowds.

There were pockets of similar celebrations in opposition strongholds in Nairobi as well.

Police fired tear gas at rock-throwing opposition supporters in one Nairobi neighbourhood, residents said, but most of the capital and the rest of the country were calm after four people were killed in election-related violence on Wednesday.

Odinga said on Thursday that most of over the 20,000 polling station result forms uploaded to the election commission's website were fake.

Odinga told Reuters the forms he considers fake had been filled out by agents working out of a Nairobi hotel, but he provided no proof for his claim.

A senior official in the electoral commission quickly shot down Odinga's claims.

"They have done their own additions and they think Raila has eight million [votes], which is ridiculous. There is nothing," Abdi Yakub Guliye told Reuters. "As far as we are concerned, we don't believe they have any credible data."

Later, the commission provided a detailed rebuttal of the opposition claims, pointing out mathematical errors and saying documents purporting to be from their system "were plainly falsified and contain elementary errors."

In its first assessment of Tuesday's poll, the European Union's election observer mission said it had seen no signs of "centralized or localized manipulation" of the voting process.

Marietje Schaake, head of the mission, said the EU would provide an analysis of the tallying process in a later report.

John Kerry, the former U.S. secretary of state heading the Carter Center observer mission, said the election system, which is ultimately based on the original paper ballots cast, remained solid and all sides should wait for electronic tallies to be double-checked against hard copies.

"The process that was put in place is proving its value thus far," Kerry said. "Kenya has made a remarkable statement to Africa and the world about its democracy and the character of that democracy. Don't let anybody besmirch that."

"It would be very regrettable if anything emerges afterwards that sought to corrupt the outcome, to spoil that outcome," he said.

Reuters TV footage showed police firing live rounds as they clashed with youths throwing stones in the Kawangware slum in Nairobi. One person was rushed from the scene in a sack; it was not clear if the person had survived.

But most of the capital and the rest of the country were calm after four people were killed in violence on Wednesday.

Traffic flowed on Nairobi's usually gridlocked streets but an increasing number of businesses opened. Earlier in the day, some market stalls and shops had opened in Kisumu and more vehicles were on the street than a day earlier.

A resident of the slum said police fired tear gas at dozens of Odinga supporters throwing stones on Thursday. Angry protests had erupted in opposition strongholds in Nairobi and the western city of Kisumu, an opposition stronghold on Wednesday, with demonstrators burning tyres in the streets.

A group of labourers and transporters sitting in the shade said they were eager for daily life to return.

"We don't want to fight," said driver Evans Omondi, 28, wearing a polo shirt and jeans. "We want to go back to work."

The men said they were worried by Odinga's allegations, but said they could not afford the consequences of violence in their city, which saw some of the worst clashes a decade ago.

Kenyatta, a 55-year-old businessman seeking a second five-year term, held a lead of about 10 per cent from the start of Tuesday's counting, the culmination of a hard-fought contest between the heads of Kenya's two political dynasties.

Odinga contested and lost Kenya's last two elections, which he also said were rigged. He has urged his supporters to remain calm but has said: "I don't control the people."

He posted 50 pages of computer logs online to support his hacking claims, but they were "inconclusive," according to Matt Bernhard, who studies computer security in election systems at the University of Michigan.

In 2007, tallying was halted and the incumbent president declared the winner, triggering an outcry from Odinga's camp and waves of ethnic violence that led to International Criminal Court charges against Kenyatta and his now-deputy, William Ruto.

The cases against them collapsed as witnesses died or disappeared. 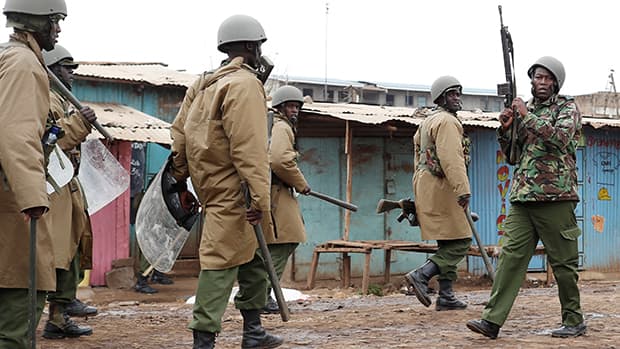