Biden in Kenosha: Trump 'legitimizes the dark side of human nature'

U.S. Democratic presidential candidate Joe Biden began his visit to Wisconsin by meeting with the family of Jacob Blake, the Black man who was shot seven times in the back by a white police officer late last month in Kenosha.

Former VP, who has made few campaign trips due to COVID-19, meets with Jacob Blake's family 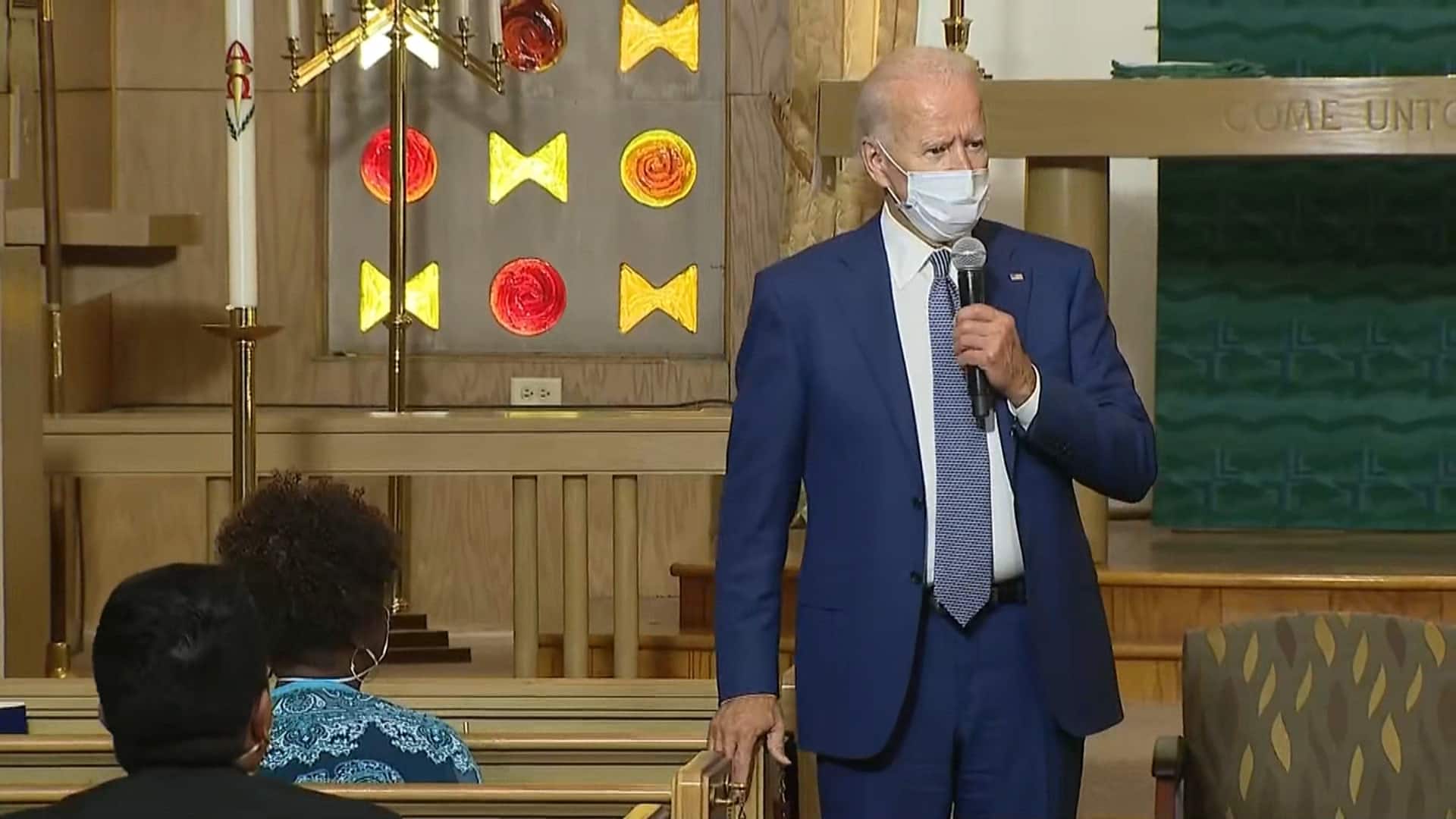 Joe Biden, speaking at a community meeting in Kenosha, Wis., on Thursday, condemned U.S. President Donald Trump's leadership amid ongoing protests over the police shooting of Jacob Blake, saying the president "legitimizes the dark side of human nature."

Biden began his visit by meeting with the family of Blake, the Black man who was shot seven times in the back by a white police officer late last month in Kenosha.

The Democratic presidential candidate spoke to Blake by phone from his hospital bed, according to a statement by Ben Crump, one of the Blake family's lawyers. Blake shared the pain he is enduring and Biden commiserated, Crump said.

Biden also spent more than an hour in private with Blake's father, Jacob Blake Sr., his siblings and one of the family's lawyers, B'Ivory LaMarr. Blake's mother, Julia Jackson, and Crump joined by phone.

Crump said Blake's mother led everyone in prayer for his recovery. Biden treated Blake "as a person worthy of consideration and prayer," the lawyer said.

WATCH | Underlying racism is institutionalized in the U.S. and still exists, Biden says: 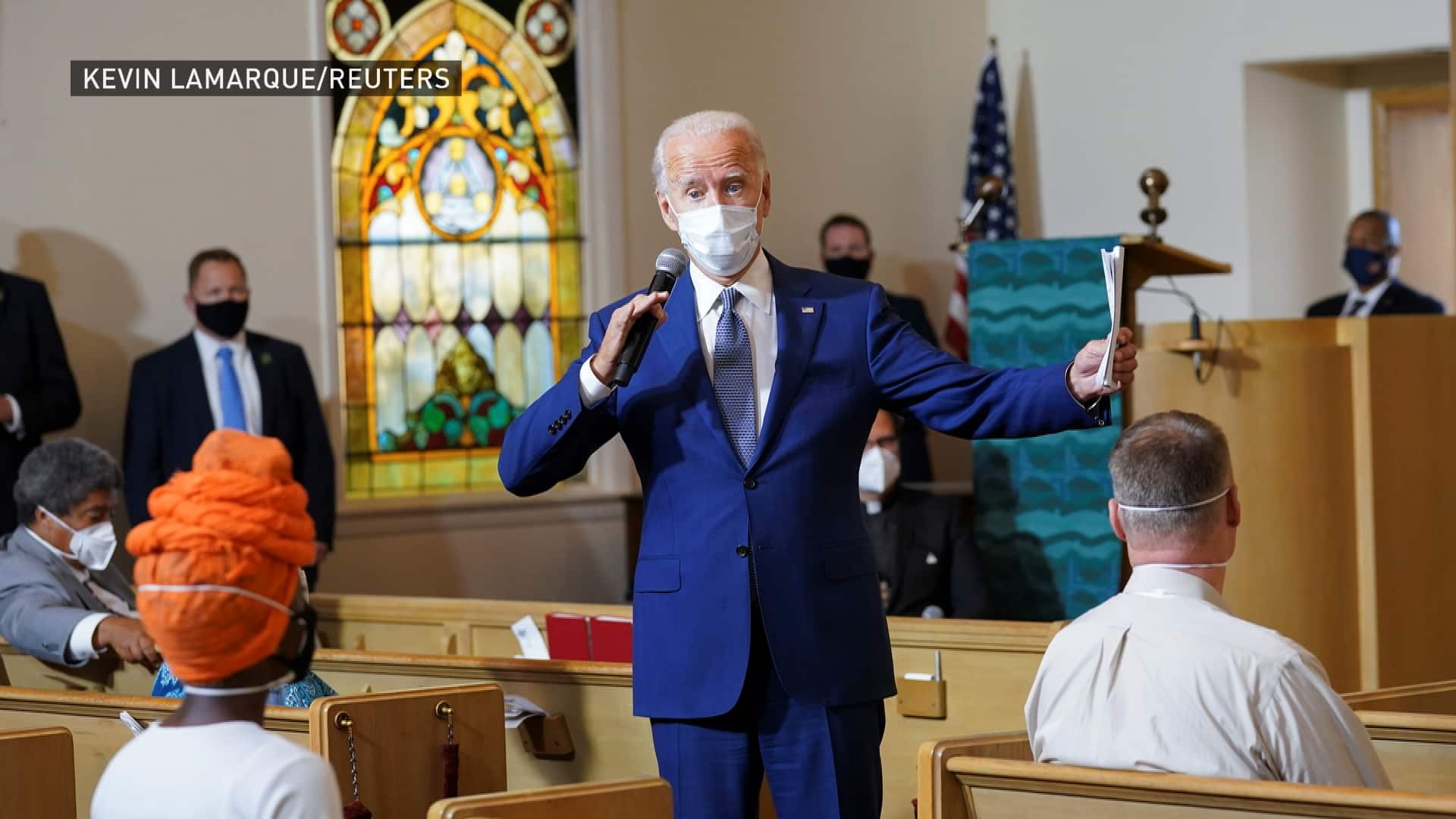 Biden says he visited Wisconsin as a healer, not a divider

3 months agoVideo
1:45
Democratic candidate Joe Biden says he visited Kenosha, Wisc., to deliver a message of hope and understanding to the community in the wake of the police shooting of Jacob Blake. 1:45

Biden followed his meeting with Blake's family and representatives with a community discussion at Grace Lutheran Church in Kenosha. The gathering included business and civic leaders and at least two representatives of law enforcement.

Rev. Jonathan Barker, pastor of the church, opened the meeting with a prayer asking for "justice for Jacob Blake" and for God to "anoint" a national leader in November who will "seek justice, love mercy ... and love their neighbour."

The police shooting of Blake on Aug. 23 set off protests in Kenosha that led to deadly gunfire two nights later.

About 30 protesters marched past Grace Lutheran Church ahead of Biden's arrival, chanting "Black Lives Matter!" while being trailed by a police vehicle instructing them to move out of the street.

A larger group of 100 in front of the church chanted "Dump Trump!" as Biden's motorcade rolled up.

Blake's uncle, who was also outside the church, criticized Attorney General William Barr for remarks made a day earlier that Blake was shot while committing a felony.

Kenosha's police union has said Blake had a knife when he was shot. Investigators have said a knife was in Blake's vehicle but haven't given more details.

"This is about making sure that we move forward," Biden told reporters on Wednesday.

He noted that he's "not going to tell Kenosha what they have to do," but instead encourage a community to "talk about what has to be done."

Since the May 25 death of George Floyd, a Black man killed by a white Minneapolis police officer, Biden has called for an overhaul of U.S. policing and embraced a national conversation on racism.

Trump, meanwhile, has countered with sweeping condemnations of protesters, an absolute defence of law enforcement and denials that Americans with black and brown skin face barriers that whites do not — moves aimed at his overwhelmingly white political base.

The president toured damaged buildings in Kenosha on Tuesday and discussed ways to quell unrest with law enforcement officials. Trump was greeted by supporters who occasionally mixed with — and yelled at — Black Lives Matter organizers.

"These are not acts of peaceful protest but, really, domestic terror," Trump said.

'Protest is a right'

Despite repeated questions from reporters, the president refused to address racism in the country or its police departments.

Biden has repeatedly denounced violence that has resulted from some protests — from a June 2 speech after Floyd's death up to a Monday address that his campaign quickly turned into a one-minute digital and television ad.

On Wednesday, Biden repeated that "to engage in violence — burning, looting, the rest — in the name of protesting is wrong. And that person should be held accountable for their actions."

But he stood by First Amendment guarantees that "protest is a right."

He also praised law enforcement, saying: "The vast majority of police officers are good, decent, honourable women and men. They put on that shield every morning. They have a right to go home that night safely — the vast majority."

But he then uttered words Trump doesn't say: "Bad cops."

Good officers, Biden said, "want to get rid of the bad cops more than anybody else does, because it reflects on them."

Biden stands by his proposals to overhaul policing — not to "defund the police," as some progressive activists espouse, but to require local forces to agree to certain best practices to get federal funding and to invest more in services, such as mental health counselling, intended to ease social problems that fall to police to handle, sometimes with violent consequences.

Biden previewed Wednesday how he believes he can make that work in Kenosha and, if he defeats Trump, in the White House.

"There's been so many fissures exposed as a consequence of what's happened that people are now realizing, 'My Lord, I didn't know people in that circumstance didn't have that kind of help. I didn't know,'" he said. "What an enormous opportunity to bring the country together." 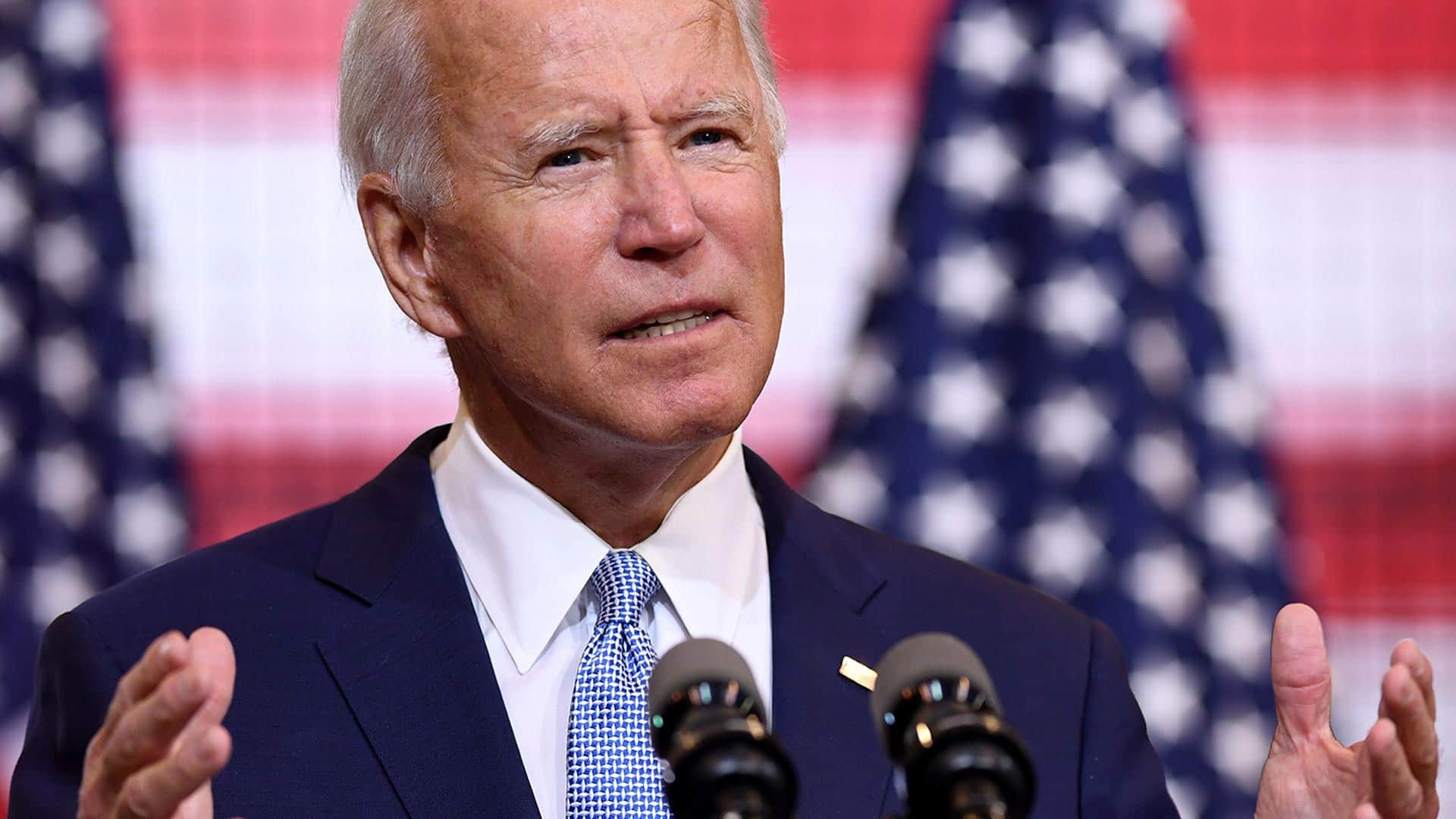 Biden says Trump 'rooting for chaos' ahead of Wisconsin visit

Wisconsin Gov. Tony Evers said he did not want either Biden or Trump to visit Kenosha. Both men ignored Evers's requests.

Evers and Kenosha Mayor John Antaramian said ahead of Trump's visit that they hoped he would stay away, fearing he'd exacerbate community tensions.

On Thursday, Evers said in a conference call that he also made his position to the Biden campaign clear, but they had already decided to come to Wisconsin.

Candidate visits not without precedent

Wisconsin Attorney General Josh Kaul, a Democrat, said Wednesday he thought Biden could help Kenosha heal in ways that Trump's stop in the city did not.

Trump, in a Fox News interview, appeared to rationalize the events that led to an Illinois teen being charged with the shooting deaths of two people on Aug. 25. The previous night, several businesses in the city had been burned and looted during protests.

The visits by Trump and Biden in an election year to a city experiencing unrest are not without precedent in modern U.S. politics.

President Jimmy Carter paid a visit to Miami in June 1980 after the acquittal of four white police officers in the killing of a Black businessman led to unrest that was eventually tied to the deaths of 18 people.

Many civic officials told Carter to stay away, and some onlookers in the Liberty City neighbourhood he toured threw objects at his motorcade.

There were 64 deaths attributed to the Los Angeles riots in 1992 and estimated property damage that was the equivalent of $1.6 billion US in today's terms.

Both George H.W. Bush, the president, and Democratic candidate Bill Clinton met with leaders and witnessed the damage, which was sparked by the acquittal of four police officers in the beating of a Black man, Rodney King, part of which had been recorded by an onlooker.